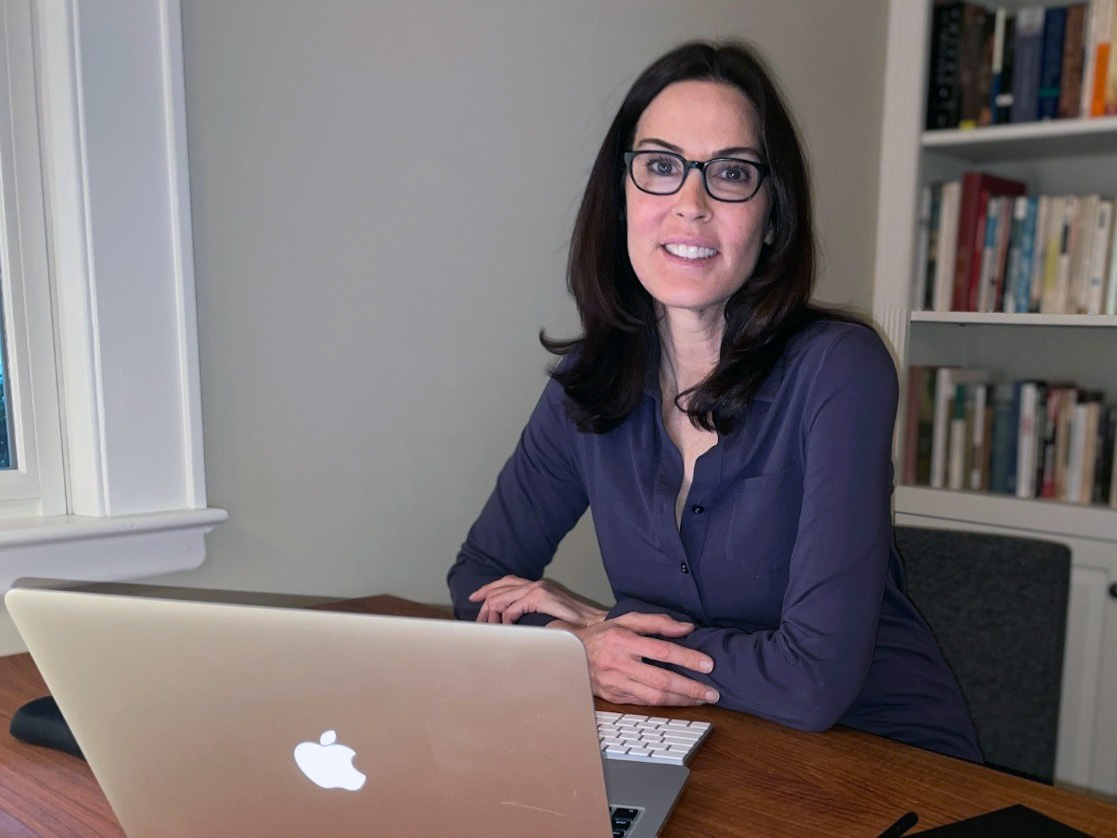 When she entered the job market as a fresh business graduate, HGSE master's student Maureen Bunney did not know she would create children's educational products, let alone games and media that would reach 90% of American schools today.

"I was always a creative kid. I used to write stories and songs, play instruments, do leatherwork, and even sang in a band," Bunney says. "But my mother said, even if you are a creative person, you have to major in something practical. So, I majored in business as an undergrad. But I missed creative work, so after college, I went back to graduate school to study communications and children's media to learn how education can also entertain and reach learning outcomes."

Her first job was at Disney's then-new education division, where she worked on apps for preschool-aged children featuring Winnie the Pooh and The Lion King's Timon and Pumbaa. The tie-ins to film highlighted for Bunney the possibilities of bringing together education and entertainment.

"I loved my work. It allowed me to dream endlessly," says Bunney.

After several years as the vice president of educational gaming and product development at Leapfrog Education, in 2010, Bunney's dreams led her to start the creative agency Mighty Play. With clients across the United States and Europe — including Disney, Nickelodeon, Zynga's Farmville, and Common Sense Media — Mighty Play's team of subject matter experts and learning designers develops and produces learning games and other curricular products. The products have ranged from mobile apps for language learning, digital safety, and financial literacy to games featuring beloved cartoon characters like Mickey Mouse and Dora the Explorer.

The company started by designing for preschool and elementary school children, focusing on literacy, says Bunney. "The power of being a fluent reader propels children into remarkable success in any field they choose — whether it is science, history, philosophy, or business. To be a fluent reader is to be free."

With their client roster of large media clients, Mighty Play's focus quickly grew to include products for children in middle school all the way up to college. The company also designed a custom social-emotional learning (SEL) program for National University in San Diego, including classroom resources and professional development tools that are accessible online and free.

Among its many significant projects, Bunney considers Mighty Play's partnership with Common Sense Education Media on its Digital Passport as one of the most defining of her career. A response to adult concerns about children's safety on the internet — especially as it became more common for children to own cell phones at younger ages — Digital Passport offers classroom games around digital citizenship. Exercises include teaching children the importance of safe password creation, managing their time and distraction on cell phones, understanding cyberbullying, and learning about the consequences of sharing information like pictures and thoughts online. In addition, there is a backend dashboard for teachers to examine how the kids interact with the platform, including if, how, and when students complete the gamified tasks. Digital Passport fits in Common Sense's more extensive portfolio of digital citizenship products for children, many of which were researched in collaboration with the Project Zero team at HGSE.

"So many people think of edtech as a superpower, which it is, but it's not the only superpower in the learning ecosystem."

"What we did with Common Sense was groundbreaking," Bunney says, indicating that the product is used in nearly 90% of U.S. elementary schools. "There was a lot of concern about digital safety for kids. Common Sense came to us with about 1000 pages of print curriculum on children's digital safety. We translated and transformed that curriculum into a series of educational games and a platform where kids can experience social media, texting, and emailing in different role-playing scenarios and games. We taught them about a novel digital culture."

Despite her success, Bunney felt she had more to learn. So she applied to the Learning Design, Innovation, and Technology (LDIT) Program at HGSE, not to become a subject-matter expert but to get at the heart of uncovering how people learn, create inclusive environments, and develop social-emotional skills in a constantly changing and digitizing world.

"I've been in edtech for many years, and frankly, I wanted to broaden my impact in helping more learners succeed," says Bunney. "I wanted to understand the non-curricular factors that play into success. How do people learn? How do they become expert learners? I also wanted to understand how to evaluate what we're doing to ensure that we're helping and not harming. Many of the strategies and traits I have learned here at HGSE are strongly correlated with academic and life success. My goal is to support students with these strategies through educational games and learning technologies. These inherent traits can be honed and developed through educational games. They correlate strongly with academic and life success."

At HGSE, Bunney has been exposed to many different perspectives from classmates and faculty that she says have enriched her understanding of how students from all backgrounds learn and interact with technology. And she continues to see the promise of technology to help solve emerging problems in education, she says, but not at the cost of the meaningful relationships made inside and outside the classroom.

"Technology is a great resource, but it doesn't replace teachers, human factors, social services," says Bunney. "Its biggest power is in its reach and engagement. Storytelling and fantasy worlds ensure that the learners are engaged with difficult content and skills for their level for their age. Technology should always respond to a learners' context, school, and community. So many people think of edtech as a superpower, which it is, but it's not the only superpower in the learning ecosystem."

After graduation, Bunney will return to Mighty Play in her earlier role as CEO and chief of product.