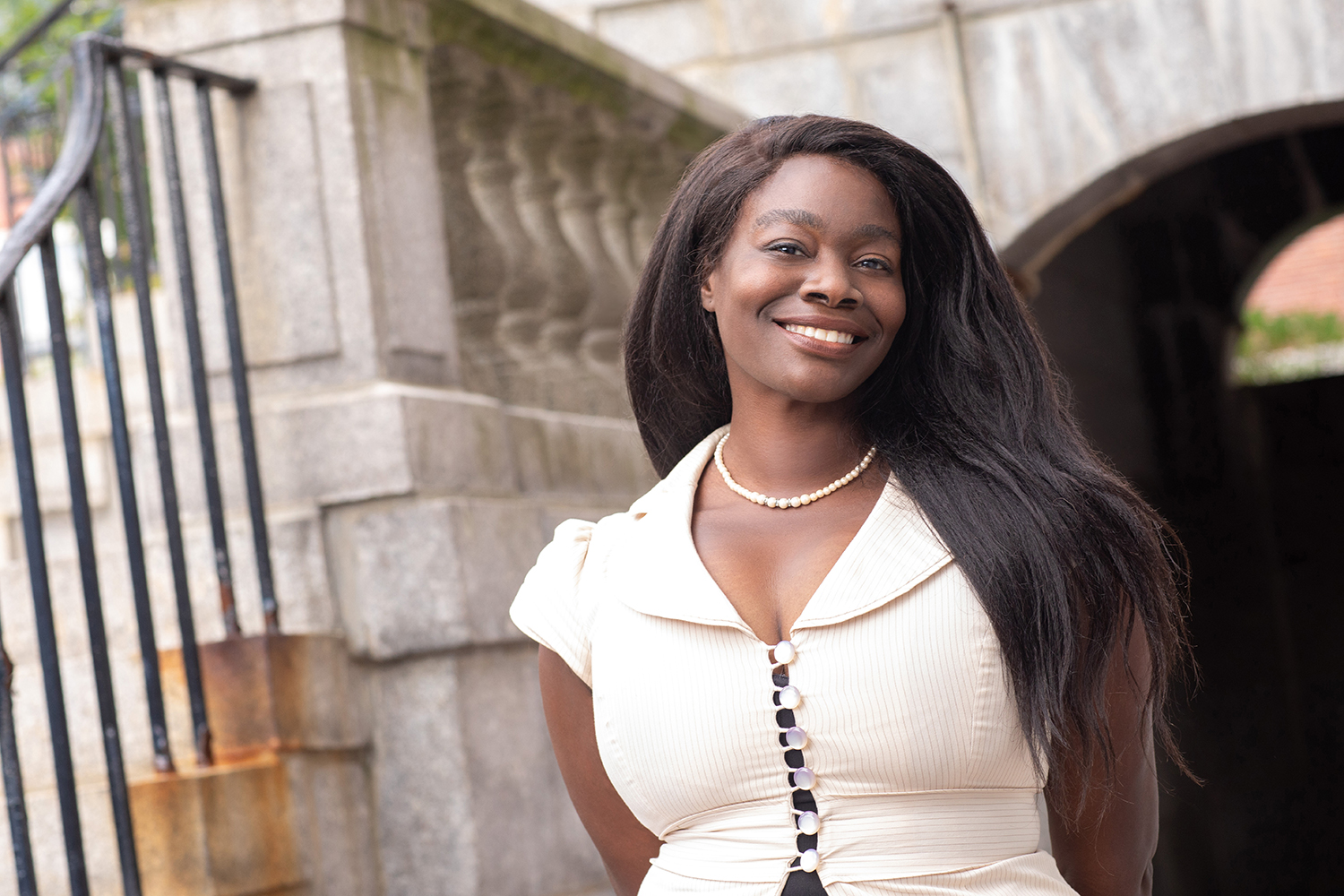 On paper, a future filled with Ivy League degrees, influential government positions, and an award-winning software startup seemed unlikely for Omolara Fatiregun – if not impossible.

“My parents came to the United States from Nigeria in the 1970s,” she explains. “Then they got divorced, and my dad went back to Nigeria. So my mom became a single, low-income immigrant Black woman in inner city Philadelphia raising two kids. Those are not great statistics.”

Yet today, thanks to her and her mother’s hard work, Fatiregun has achieved remarkable success. After graduating from Harvard College, she embarked on a career in philanthropy and government, serving as vice president of the Milton S. Eisenhower Foundation and senior fellow at the Annie E. Casey Foundation. In 2020, drawn to address issues of inequality through the lens of education, she returned to Harvard as a doctoral student in HGSE’s Ed.L.D. Program.

It was at the Ed School that Fatiregun began to reflect on her own childhood experiences of poverty and inequality. Inspired to make a change, Fatiregun created Thrive!, a company that partners with local government agencies to run “equity audits” of their spending, using an equity-detecting software that Fatiregun designed. “More than just a software company,” Thrive! facilitates meetings between government employees and community stakeholders when an audit is complete. Grounded in the audit’s findings and the community’s own assessment of their needs, these meetings aim to bring about real change.

Fatiregun, who is completing her Ed.L.D. third-year residency as a fellow at the Aspen Institute’s Center for Philanthropy and Social Innovation, designed Thrive! to work with both communities and government agencies because, in her own experience (she had a 17-year career in the government and in philanthropy), she observed a gap between these two entities. Often, she explains, what a local government spends money on – something like school policing – might not be what a community thinks is best. By conducting a data-based equity audit, then reviewing the findings with both community members and government decision makers, Thrive! works to close this gap.

“We believe that to really think about breaking cycles of poverty and transforming systems, we have to start transferring power – specifically transferring power to the individuals whom systems are supposed to be serving,” says Fatiregun. “Bringing together BIPOC community leadership with the government agencies facilitates an authentic exchange and dialogue.”

Fatiregun was moved to create Thrive! in July 2020, during what she calls “the summer of George Floyd.” Frustrated by the continual silencing of communities of color, Fatiregun felt called to leverage her experience to make a change. “I felt a deep sense of wanting, longing, to make a contribution. I wanted to use my various experiences and knowledge to really significantly move the needle on racial justice in this country.”

It’s been a year since Fatiregun started the company, and Thrive! is thriving. After an initial pilot in Somerville, Massachusetts – where they worked with the city government and low-income residents to name and address community needs – Thrive! became incorporated in February 2021. Since then, the company, which is a member of the Harvard iLab and was named a runner up in the President’s Innovation Challenge, won the 2021 MIT Solve Global Challenge in the Antiracist Technology Track and the HP Award for Advancing Digital Equity, and has been recognized by Black Girl Ventures, Halcyon, Fast Company, and the Social Innovation and Change Initiative at the Harvard Kennedy School. Already, over a dozen government agencies across 12 states have inquired about Thrive!’s equity software. Fatiregun is excited about these partnerships, as they align with her goal of bringing Thrive! to jurisdictions across the country.

“There are 38 million Americans living in poverty right now, and they live in all 50 states,” she says. “Because of our highly scalable software solution, we have the ability to expand to all states and to transform millions of lives.”