Lisa Cenca, Ed.M.'21, recipient of the Phyllis Strimling Award, is a leader in designing enriching educational opportunities for girls.
By Gianna Cacciatore
May 26, 2021 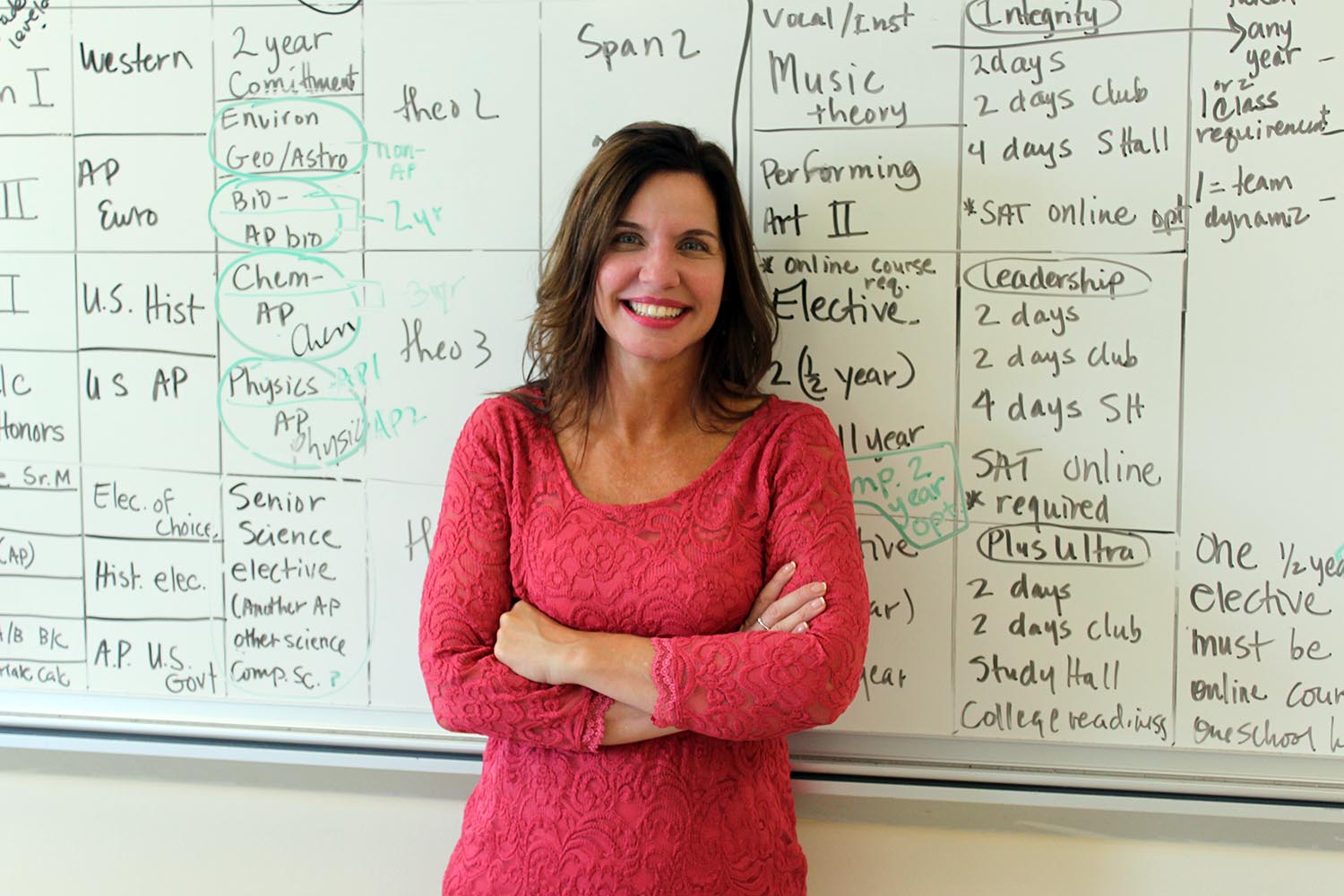 Lisa Cenca’s impact on women and girls began in 2017 when she was tasked with opening a new girl’s school to parallel Malden (Massachusetts) Catholic High, a nearly 100-year-old boy’s school. Cenca, already a veteran educator with a track record of success in designing specialized learning programs, threw herself into the challenge.

“I had this opportunity to build the school in an extraordinary way. It was like a blank canvas,” reflects Cenca. “I thought, I can do something proven, or I can trust in myself and build something new, something that addresses the needs of girls in particular.”

Cenca’s decision to address the needs of girls directly is one of the reasons why she has been selected as the 2021 winner of the Phyllis Strimling Award, to be presented at HGSE Commencement on May 27. Named for the longtime director of the former Radcliffe Seminars Program, the Strimling is awarded yearly to an HGSE graduate whose work advances women and girls through inclusive leadership and community problem-solving.

Cenca designed her girls school to do just that. From her research, Cenca knew that while girls were outperforming boys in high school, women were still underrepresented in major leadership positions. Her school, she decided, would work to close that gender gap. Unlike other schools she had visited, where leadership was in the mission statement but not in the classroom, Cenca’s school would incorporate leadership skills into the students’ everyday experiences. She enlisted the help of Julie Carrier, CEO of Girl’s Lead Worldwide, to turn her vision into reality.

A year later, when Cenca’s plan for the school was complete, it included a four-year, for-credit leadership course students would be required to take; a “winter term” where students used their leadership skills to investigate global issues that interested them and design solutions; and a social justice capstone project, which allowed seniors to present a project that showcased their passion, but also the extent of their leadership learning over the past four years. Central to this work, explains Cenca, was the development of confidence.

“I realized that if we gave girls opportunities to feel safe in failure and build their resiliency and growth mindsets, they would learn the confidence to take risks and apply for powerful jobs when they are out in the world,” she says.

The girls’ school opened to its first class in fall 2018. By the end of that year, the success of the school’s model was apparent. Every student ended the year with a grade average of a C or higher. Indeed, the students who had entered the school in the lowest quartile, says Cenca, all moved onto the honor roll by the spring. More excitingly, Cenca’s data, collected through extensive assessment at the beginning and end of the year, showed that girls’ confidence levels were increasing. On top of it all, the school’s success had attracted donors — so many that more than $2 million in funding had poured in. “The outcomes were just phenomenal,” reflects Cenca with a smile.

Inspired by the success of her education leadership model at Malden Catholic, Cenca decided to expand her model into an organization — one that could bring leadership development to girls around the world. She left Malden Catholic and applied to HGSE’s School Leadership Program, eager to connect with fellow entrepreneurs and learn how to scale her model. While the decision to leave the school she founded was bittersweet, Cenca felt called to bring explicit leadership development to a wider audience of women and girls.

At HGSE, Cenca quickly found the support she needed to expand her vision. In the fall, she was accepted into Harvard’s Venture Program, run through the iLab, which gives student entrepreneurs access to advisers, workshops, and a supportive community of fellow business leaders.

“I was learning so much. I had all of the content, but I was learning how to start — how to make a pitch deck, how to use critical data accurately and impactfully, how to lead change,” says Cenca.

Cenca’s learning culminated in the launch of The Leadership Program for Girls this spring. The program provides partner schools with a fully integrated four-year leadership curriculum, the framework for a leadership capstone program, and faculty and staff training. Already, 16 schools have applied to work with her organization, and one school — St. Ursula Academy of Toledo, Ohio — has been accepted as their first “National Girls Leadership School.” Cenca is also in talks with policymakers in different countries, including China, South Africa, and the UK, who are interested in broadening leadership opportunities for girls internationally.

In the meantime, Cenca is also working on two books: one, titled A Girl’s Guide to Greatness: Where Leadership Meets Social Justice, that she hopes will enable individual girls to find their passions and act on them, and another, a joint effort with Carrier of Girl’s Lead, that will be a manual for school leaders who want to create leadership programs for girls in their schools.

Cenca’s organization is in its infancy, but her commitment to girls’ education and leadership is already being recognized. There’s the Phyllis Strimling Award, which Cenca is “humbled” to be receiving, as well as the Zonta International Women Making a Difference Award, which Cenca was awarded earlier this year.

But Cenca isn’t resting on her laurels this graduation season. Instead, she is thinking about the future. “It’s big and a little bit scary,” she says. “I know that I’m called to do this work, and I know that I can do this work. … Changing the paradigm of education for girls is massive, but my Harvard experience has given me the courage and support to try.” HGSE's worldwide community came together — virtually — to celebrate the accomplishments of 670 graduating students from 62 countries.