A musical and Muppet-filled evening pays tribute to the 50 years of collaboration between Sesame Workshop and Harvard.
By Emily Boudreau
October 3, 2019 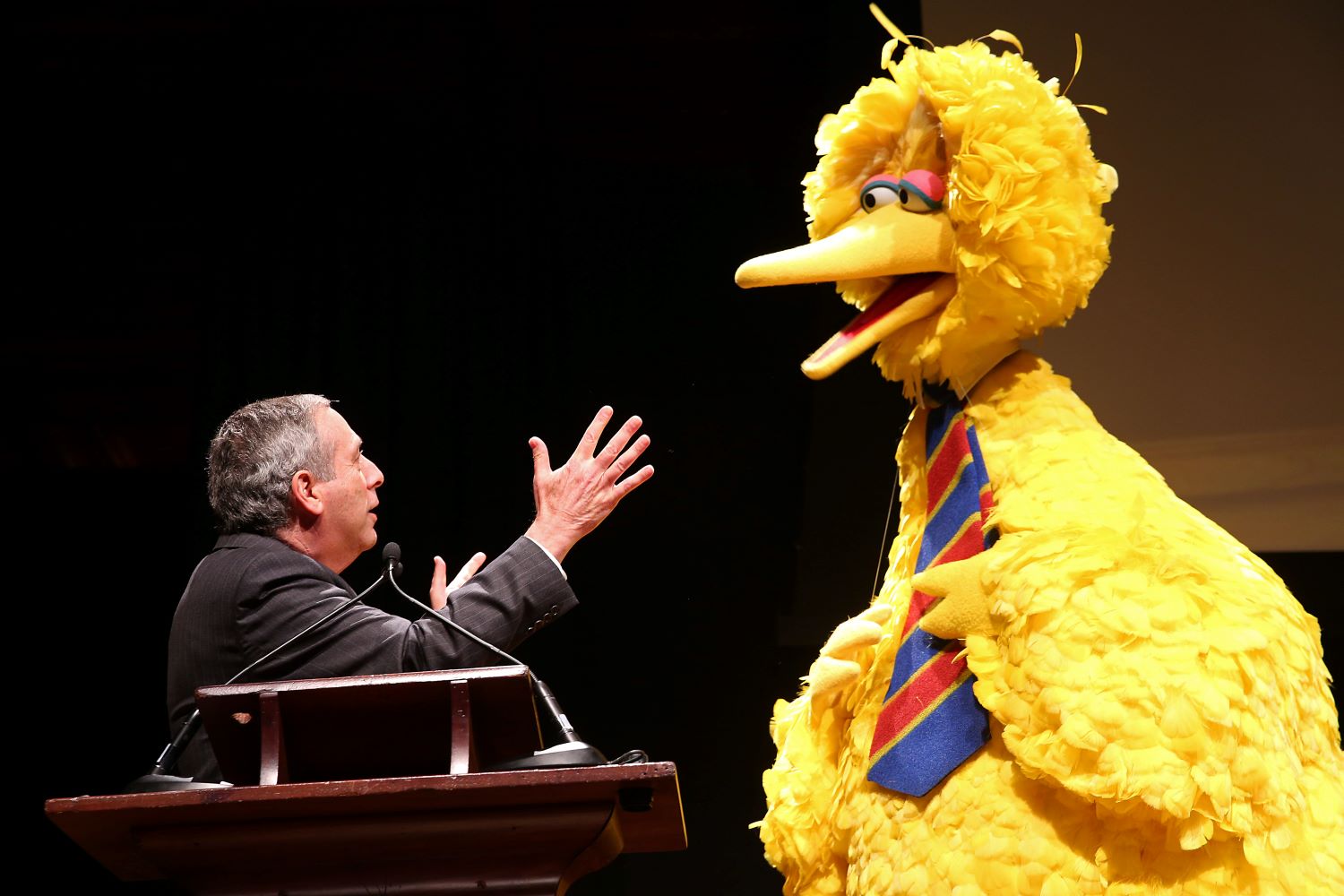 Gathering to honor a 50-year partnership between Sesame Workshop and Harvard, Sanders Theatre was packed with alumni, current students, esteemed faculty, and researchers from far corners of Harvard who all had a special place in their hearts for a neighborhood where sunny days sweep the clouds away.

While the highlight of the evening for many may have been hearing Professor Grover discuss his new course offerings (Applied Physics and the History of Fuzzy Slippers) or singing along with Elmo, the featured speakers and videos highlighted how much of that would not have been possible without Harvard’s network of visionaries, researchers, and songwriters. After President Lawrence Bacow proclaimed Big Bird the Official Bird of Harvard, he observed how transformative the partnership has been. “The power of partnerships like this exemplify how we can harness knowledge and research to change lives,” he said. 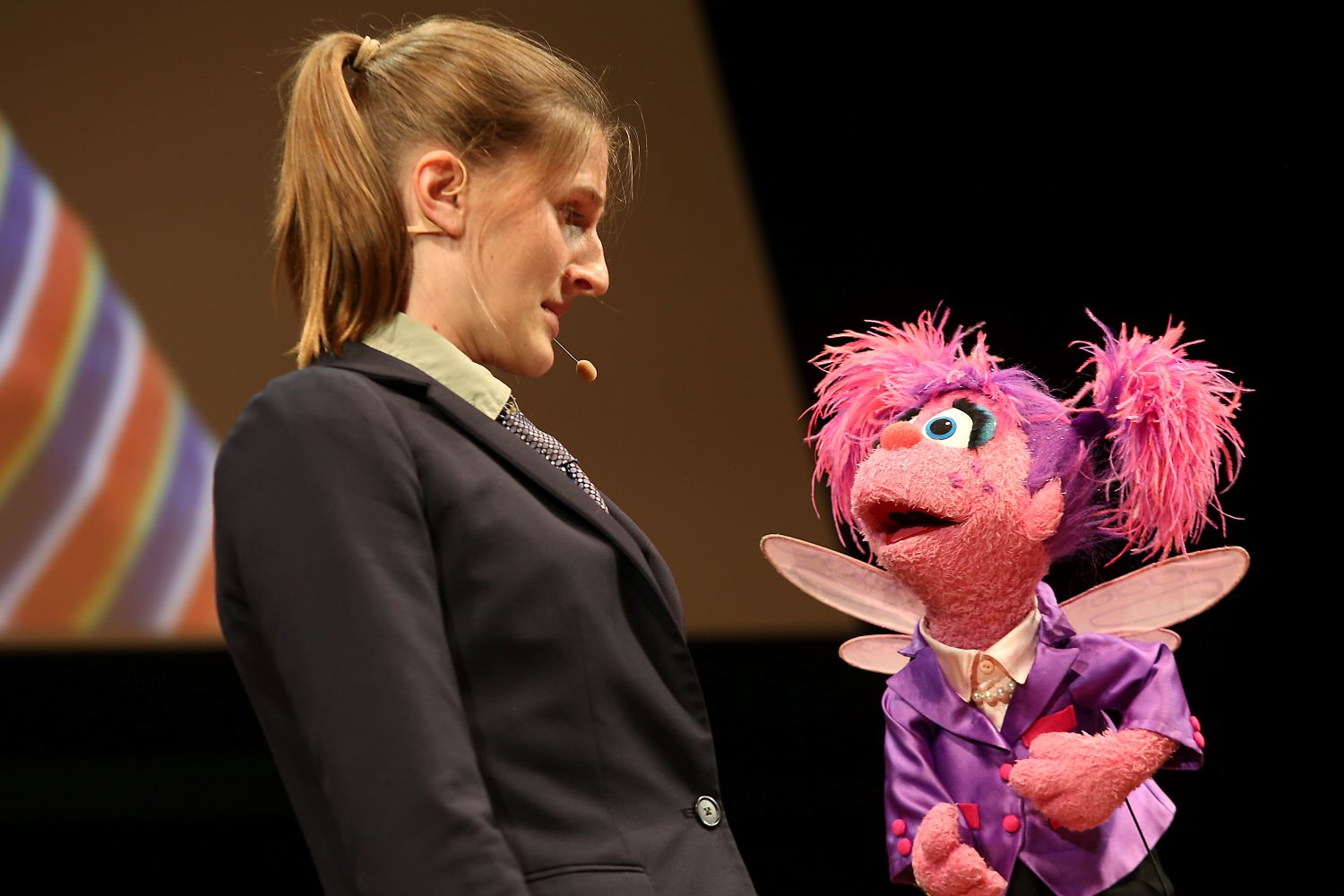 Members of Harvard's Hasty Pudding Theatricals were joined by Abby Cadabby to present a satirical look at the history of Harvard's involvement in Sesame Street.

“Harvard helped everyone get to Sesame Street,” remarked Dean Bridget Long in her opening speech, noting how revolutionary and influential the work has been for so many children across the years. “Sesame Street taught us to have courage, to reach out to people — or Muppets — who might look different,” she said. The urgency for that work is even greater now, said Long, highlighting the research that continues to illuminate our understanding of child development, via the Center for the Developing Child, the Making Caring Common Project, and the Zaentz Early Education Initiative.

Briana Pressey Ellerbe, Ed.M.’12, and Shanna Kohn, Ed.M.’14, also took to the stage to express their gratitude to Senior Lecturer Joe Blatt and his course on informal learning. Sesame Workshop CEO Jeff Dunn echoed those sentiments. “You will all have so many choices,” he said to the assembled students. “I hope you’ve been inspired by the work Sesame does. The world needs less focus on ‘me’ and more on ‘we.’” 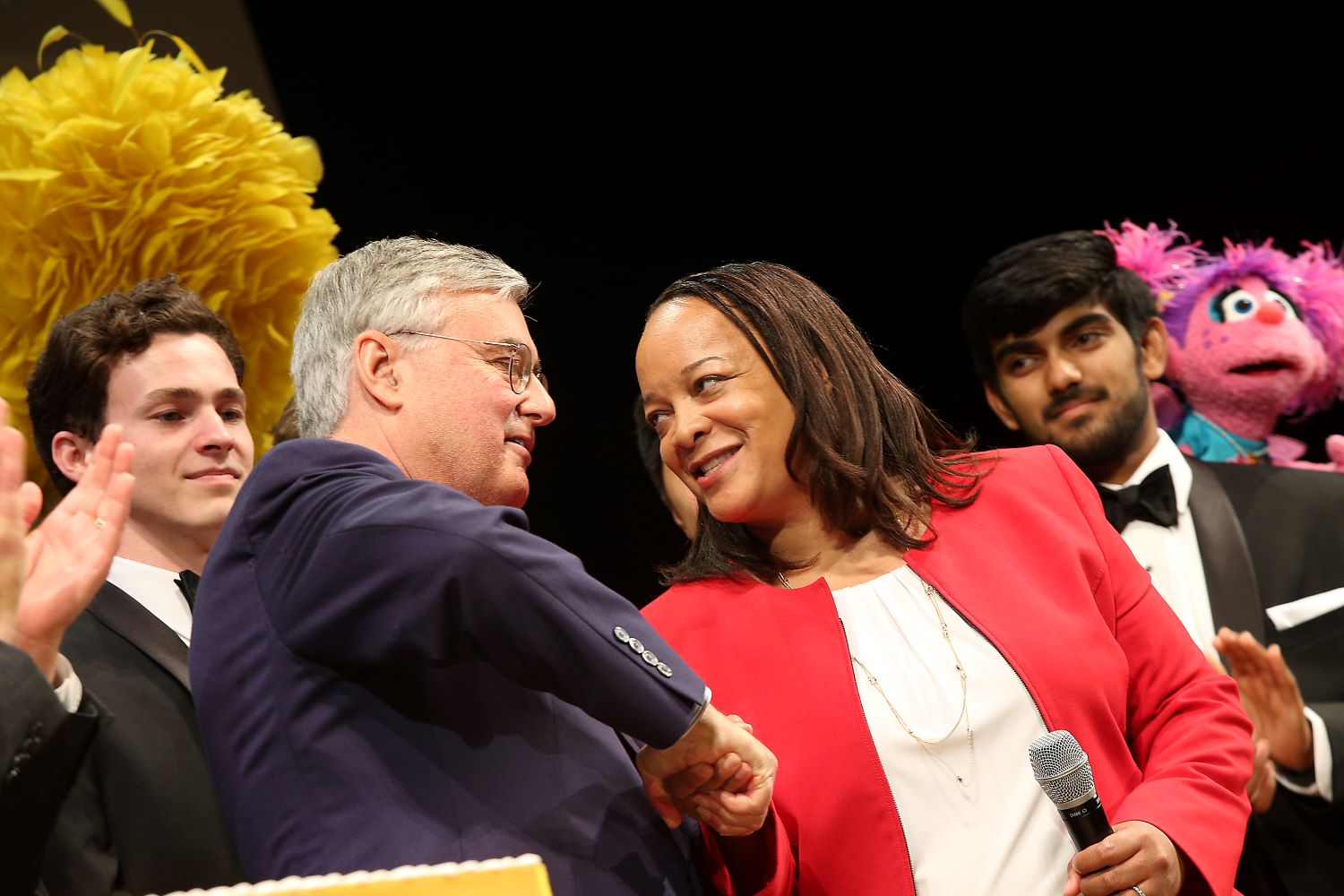 The Hasty Pudding Theatricals joined forces with the Muppets and reenacted what Bert and Ernie dubbed a 50% accurate history of Harvard and Sesame Street. Harvard’s oldest a capella group, the Krokodiloes, closed the event with a medley of songs composed by Harvard College alumnus Joe Raposo, including the fan favorite “C is for Cookie,” and led everyone in a rousing rendition of “Happy Birthday.”

"I’m thrilled that the decades-old partnership between Sesame Street and the Harvard Graduate School of Education has benefited millions of children," said Long after the event. "Our collaborative efforts, along with the commitment and talents of HGSE faculty members, have enabled us to prepare graduates to excel in both learning design and creative roles in children’s media. At HGSE, we recognize that the children’s media landscape has changed drastically over the years, but there is still an urgent need to support our youngest learners, and I’m confident that the HGSE and Sesame Street partnership will continue to evolve to benefit children everywhere."

More photos from the event:

The Sesame Street characters talk about their favorite subjects in school: