A new virtual reality project aims to help teachers develop and practice their skills before they enter the classroom.
By Andrew Bauld
September 11, 2019 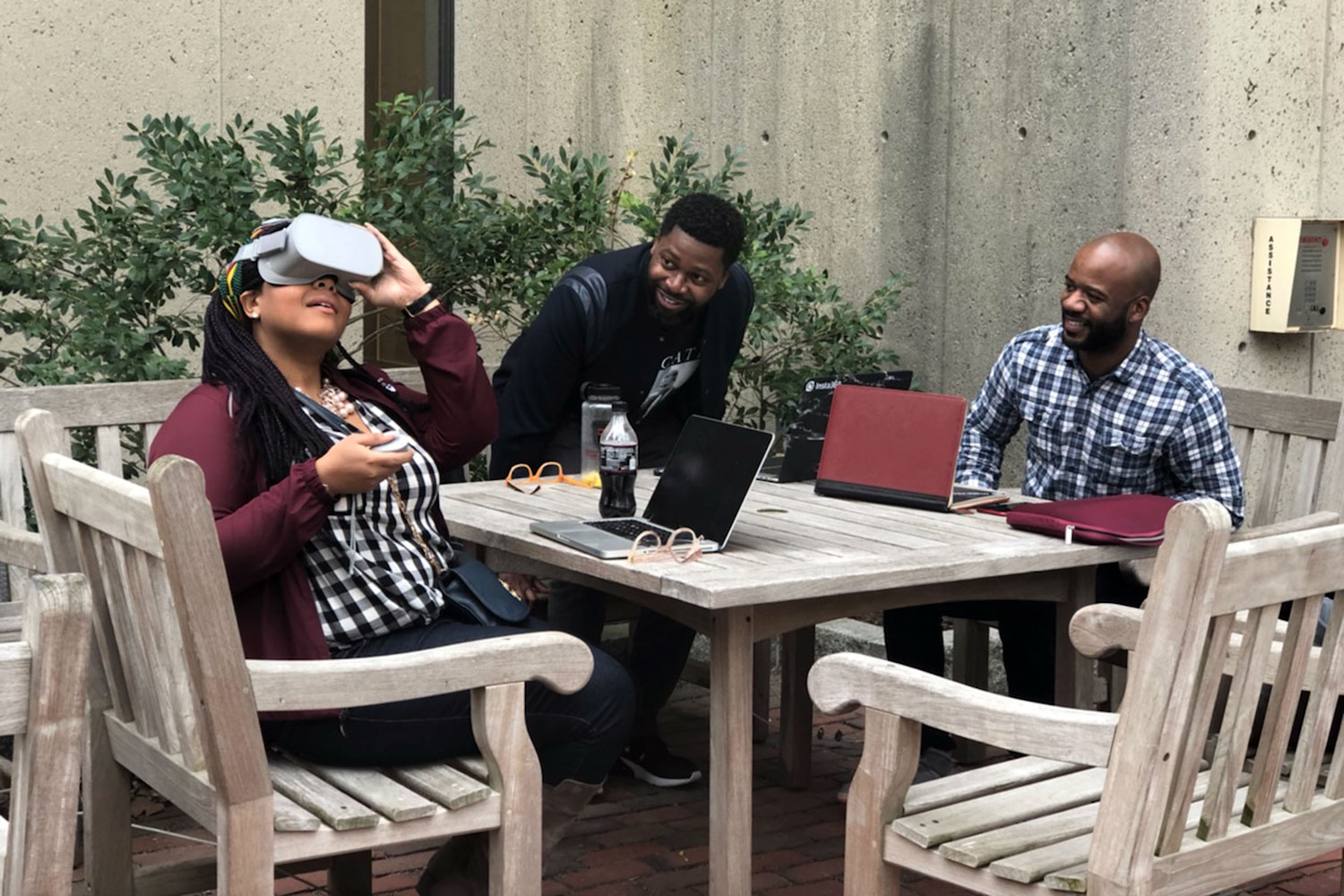 As new technology is changing the look of classrooms around the world, a new project from two HGSE students aims to harness the power of virtual reality for teachers.

For the past year, Ed.L.D. candidates Hassan Brown and Kevin Bryant having been working on a virtual and augmented reality project called VRsatility, with the goal of providing teachers with an immersive virtual space to engage in realistic mock simulations to practice high stakes decision-making scenarios before entering the classroom.

“Research states that teachers make over 1,500 decisions per day,” Bryant says. “As former teachers, we understand the stress that accompanies many of these decisions. Learning through virtual simulation has become a common practice in other fields, so why not education?”

The Harvard iLab is available to all full-time Harvard students who want to explore innovation and entrepreneurship at any stage. Learn more.

Both Brown and Bryant came to HGSE with an interest in educational innovation and technology. Brown, a former social worker and public middle and high school science and math teacher, had worked with the Gates Foundation around workforce development and teacher diversity in the Pacific Northwest; Bryant studied computer science as an undergraduate and worked in New York City schools as a math teacher and principal who led efforts to embed technology in his classrooms.

The idea for VRsatility was hatched during a January Term trip to Singapore and Tokyo, during which Brown and Bryant bonded over a mutual interest in culture and technology and a desire to explore what made the educational systems in those countries so successful in adopting and implementing new technology in their classrooms.

“In Singapore and Tokyo, we saw how comfortable students and teachers were with virtual reality and augmented reality,” says Brown. In Singapore, the two watched students in an aeronautics class scan QR codes that simulated malfunctioning equipment on board a virtual plane and then work in small groups to fix the issue.

Back at HGSE, the two began what they described as “a second job” outside of their Ed.L.D. Program, designing the early version of VRsatility. They spent months testing software and writing scenarios.

The early version of the program places the user into a virtual classroom as a student surrounded by classmates who are bullying you because of a poor grade on a recent test. “It’s a social-emotional example, and during the simulation you are fully immersed and part of the experience,” Bryant says. “You see real people in front of you and you decide how to react.”

In another scenario, a team is working on a presentation when another member walks in late. The screen freezes and the user decides how the team will respond, either positively or negatively, and then how the late team member will react. Brown and Bryant say future versions will have even more classroom examples and response options for users.

Following the virtual experience, users debrief with Brown and Bryant in the real world through a set of scripted questions to drive additional reflection. In future versions, the two will aim to provide school administrators with the tools to use VRsatility to work with teachers to adjust instructional practice.

“There are a vast array of scenarios that teachers can benefit from using VRsatility and we want to make sure we’re working with educators to figure out where we go with the next iteration,” Brown says.

This summer, Brown and Bryant were selected by the Harvard Innovation Lab (iLab) as a venture team to work on developing their project. VRsatility also received two rounds of funding from the Harvard Initiative for Learning & Teaching (HILT). The two had a chance to share an early version of the project during the HILT education showcase, where invited organizations like VRsatility could demonstrate their projects and receive feedback from other education innovators across disciplines.

“Both the iLab and HILT gave us a lot of confidence in VRsatility, and now we can really take it to the next level,” Brown says. “The education showcase at the iLab gave us the chance to get it into the hands of over 50 users, and it also allowed us to meet with different folks with interest in virtual reality who are supporting us in moving forward.”

After their summer work with the iLab, Brown and Bryant will serve as educational innovation fellows with HILT during the 2019–2020 academic year, where they’ll support other entrepreneurs around Harvard while also connecting with more potential future collaborators.

Besides refining their project, Brown and Bryant have spent the summer in talks with local school administrators as well as conducting research with a number of districts to learn how to bring VRsatility to a wide audience of educators.

“Our big picture is spurring social innovation in education,” Brown says. “We have one more year on campus, and we want to make sure we walk away with a viable project that can go to market.” With their new app — launched in the pandemic — two alums give teachers a tool to identify struggling readers and provide personalized support.