Professor Roberto Gonzales on why it is important to bring greater understanding to debates around immigration in the United States and how his new Harvard initiative will help.
By Jill Anderson
September 18, 2019 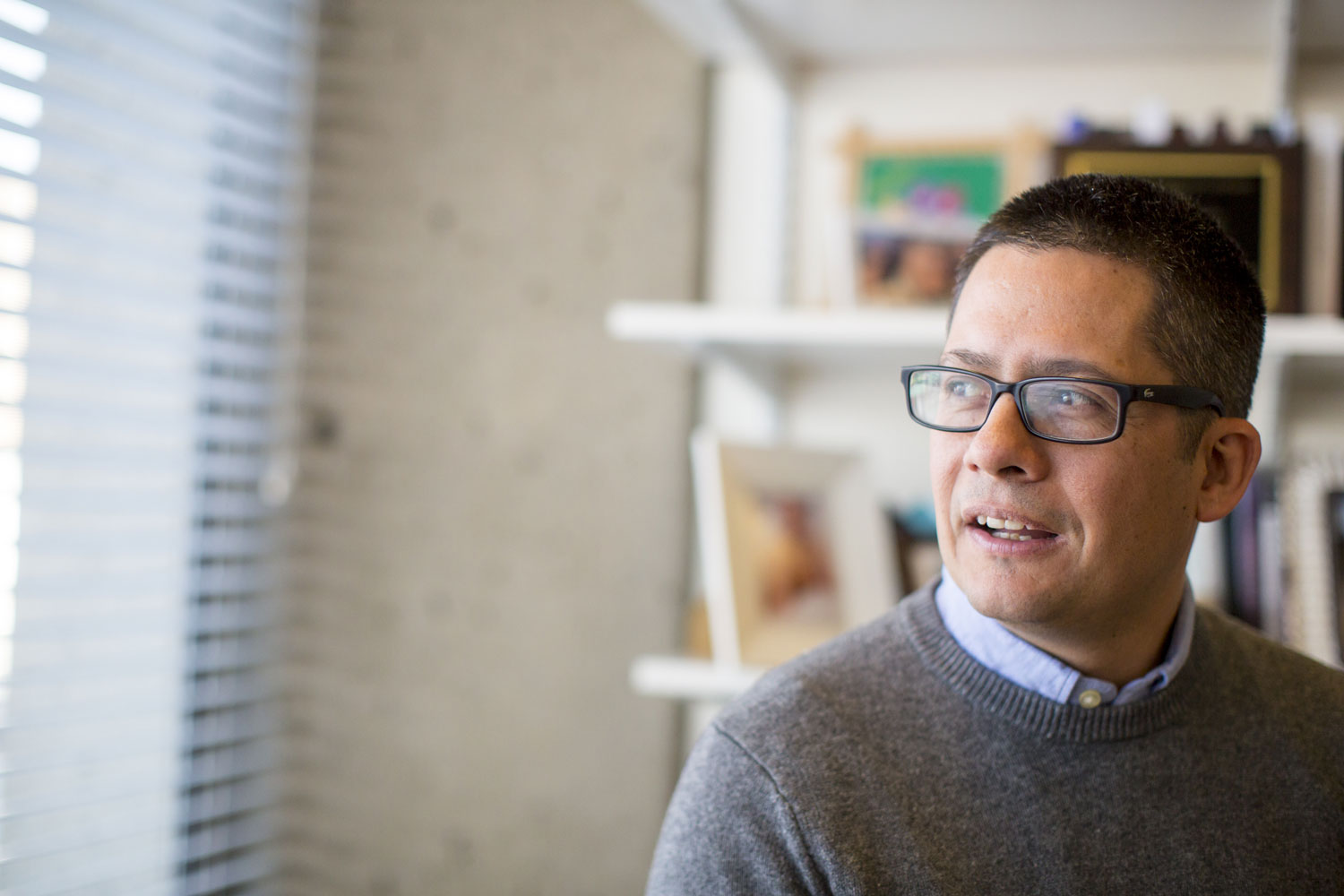 Regardless of how you might feel about immigration, Harvard Professor Roberto Gonzales thinks we need to better understand its implications and how it affects everyday life — not just for immigrant communities but for the country as a whole. In this episode, Gonzales discusses the immigration crisis in America and his new effort, the Immigration Initiative at Harvard, that connects researchers, policymakers, and immigrant communities in dialogue, supportive action, and shared learning.

Jill Anderson:  I'm Jill Anderson. Welcome to the new season of The Harvard EdCast. With the uptick in anti-immigrant rhetoric and exclusionary policies in America, Harvard professor Roberto Gonzales knows it's hard to ignore the issue of immigration. For 17 years, Roberto has been studying the lives of young immigrants in America. No matter how you might feel about immigration, Roberto says there's still a lot we need to understand about it, how it affects undocumented people's lives, their children, and how it might affect education, healthcare, or the job market. So he's launching the Immigration Initiative at Harvard in an effort to bring researchers together to find out more and help educate the public. Roberto hopes to see the day when this research isn't necessary, but immigration has long been a contentious issue in America. With the daily news over the past few months about ICE raids, the conditions of detainment centers, how children are being separated from their parents, I had to ask Roberto about what we actually do know about how this might impact children.

Roberto Gonzales:  Well, there are profound impacts. We know that the separation of a child from her or his parent is traumatic. We've seen that through the separations at the border. We've seen that also through deportations. There was recently a large scale raid in Mississippi. Immigration agents apprehended about 650 people. Many of those were parents of small children. This happened on the first day of school, and so there were kids who didn't have parents to pick them up.

Jill Anderson: What do you think people just don't know or understand about this population?

Roberto Gonzales: I think that the national debate, and certainly what comes from our president, paints this population in very broad brush strokes.

Roberto Gonzales: President Trump kicked off his presidential campaign by very specifically pointing out Mexican migrants as murderers, as rapists. These are very familiar tropes. We've seen this historically with Irish, with the Italians, with the Chinese, with Mexicans, with many newcomer groups that get painted as a group that's unable to assimilate, but moreover that's bringing disease, that is sucking up social services, that is introducing crime into neighborhoods.

The reality is that this is a population that is not prone to crime, particularly those who don't have legal status. Their main goal is to make ends meet, to feed and clothe their family members, to get home at the end of the day, to stay hidden. The last thing that they want to do is draw attention, but what's more, there's a population of longterm stayers. There are presently 10 and a half million people in this country that are living in unauthorized residency status. The average length of time lived here is 12 and a half years, so these are longterm stayers who have planted roots in their community, who have children, who are attending local schools, who are connected to their neighbors, to employers, in some cases they own their own business, to their employees, to communities of worship. They contribute to local economies, they participate in their neighborhoods, they're viable members. It's just that they lack, many of them, because they lack legal status, we've really put a big target on their backs.

Jill Anderson: So something you just mentioned was how we have this misconception, misrepresentation of who these people actually are. And that leads me a little bit to this new initiative you're starting, the Immigration Initiative at Harvard. What motivated you to do this initiative?

Roberto Gonzales: That's a good question. Scholars like me, I'm a sociologist by training, for decades, we've been studying how young people in immigrant families adapt, come of age, experience life in the United States. But as we've been discussing, increasingly immigration policy has played a defining role in those processes. This era has seen a growth in the undocumented population that has stabilized in recent years, but over the last 20 to 30 years we've seen an incredible growth, and again, a real kind of uptick in exclusionary policy and anti-immigrant rhetoric.

Academics, however, been slow to keep pace with these trends. It's studying these populations, populations that are, as I mentioned before, that want to stay hidden. It becomes very difficult. It becomes very expensive, time consuming, and so many of the national studies, the very large immigration studies, many of the national surveys don't have this population, don't ask questions about undocumented status, and so don't capture the experiences of this growing and significant population.

There's been a small and growing group of scholars across disciplines who are carrying out, I think, some really important research today to understand the experiences of those who don't have legal status. This is in anthropology, and sociology, and political science and psychology. And so this effort really is my attempt to try to bring together some of these strands, and our students are really, really interested in this topic.

Jill Anderson: So it sounds like there's a lot of research happening, but it's happening in different pockets and areas, and it really needs to be brought together.

Roberto Gonzales: So I think that's right. It's a growing line of scholarship to be sure, but my hope is to really kind of help to bring those conversations together, and to connect that really important work to questions of policy and practice.

Jill Anderson: There's a lot of people who work with this community. And what can you tell me about how this affects people in their jobs, like educators in schools or community workers?

Roberto Gonzales: Yeah, that's right. So earlier I said that immigration policy has played a growing role in young people's everyday experiences and their trajectories over time. Nonetheless, this is an issue that our Congress has not been able to kind of move forward, and most Americans favor some form of legalization or some form of a change in our immigration policy.

Roberto Gonzales: But Congress has not been able to act, and our lawmakers like to say that change takes time, and the policymaking processes incremental. I think indeed if we look historically, any progressive change in this country has taken years, if not decades to accomplish. But meanwhile, kids in their families have to carry out their everyday lives. And so how do we think about that reality of time, and all of the people in their lives, again, teachers, counselors, social workers, health care professionals, community police, who have undoubtedly been impacted?

So one, how we think about their role in addressing everyday life for immigrant children and families? And then on the other side, how do we think about how they've been affected? Undoubtedly the toxic public debate about immigration has made its way into neighborhoods, onto school grounds, into classrooms, and it's having a profound effect, and teachers, counselors, other professionals are really being confronted by these issues in realtime on a daily basis and really struggling to kind of understand their role in addressing, one, these issues in their classroom, in their school campus, in their districts, but also to provide resources to kids and families who need it.

Jill Anderson: What policy changes do you think we need to see to maybe make your research obsolete?

Roberto Gonzales: The vast majority of American public wants to see some sort of change, believe the immigration system is broken. Now, there's the wide range of opinions about what to do about it. I believe, I think, first and foremost that we really need to address this population of longterm stayers, of residents who've been here upwards of 12, 15, 20 years. Always to be sure that we need to understand not only our domestic policies but also our international policies, what is our involvement in Central America, for example, and what might that be encouraging, and how can we help to strengthen local economies so that residents are not prone to migrate?

There are opportunities, I think, for us to play in terms of policy, in helping to rectify for young people and their families, "How do we provide access in really important and significant ways to kids and families so that they're able then to take advantage of new opportunities, new opportunities of access, and to really grow and to be their best selves?" I believe really strongly that there is talent across all communities, but there aren't necessarily opportunities among all communities. And so to provide opportunities, legalization, I think, would be the tide that lifts all boats, but in addition to that, I think that we really need to continue to do work within communities and institutions to make sure that immigrant children and their families are best prepared to take advantage.