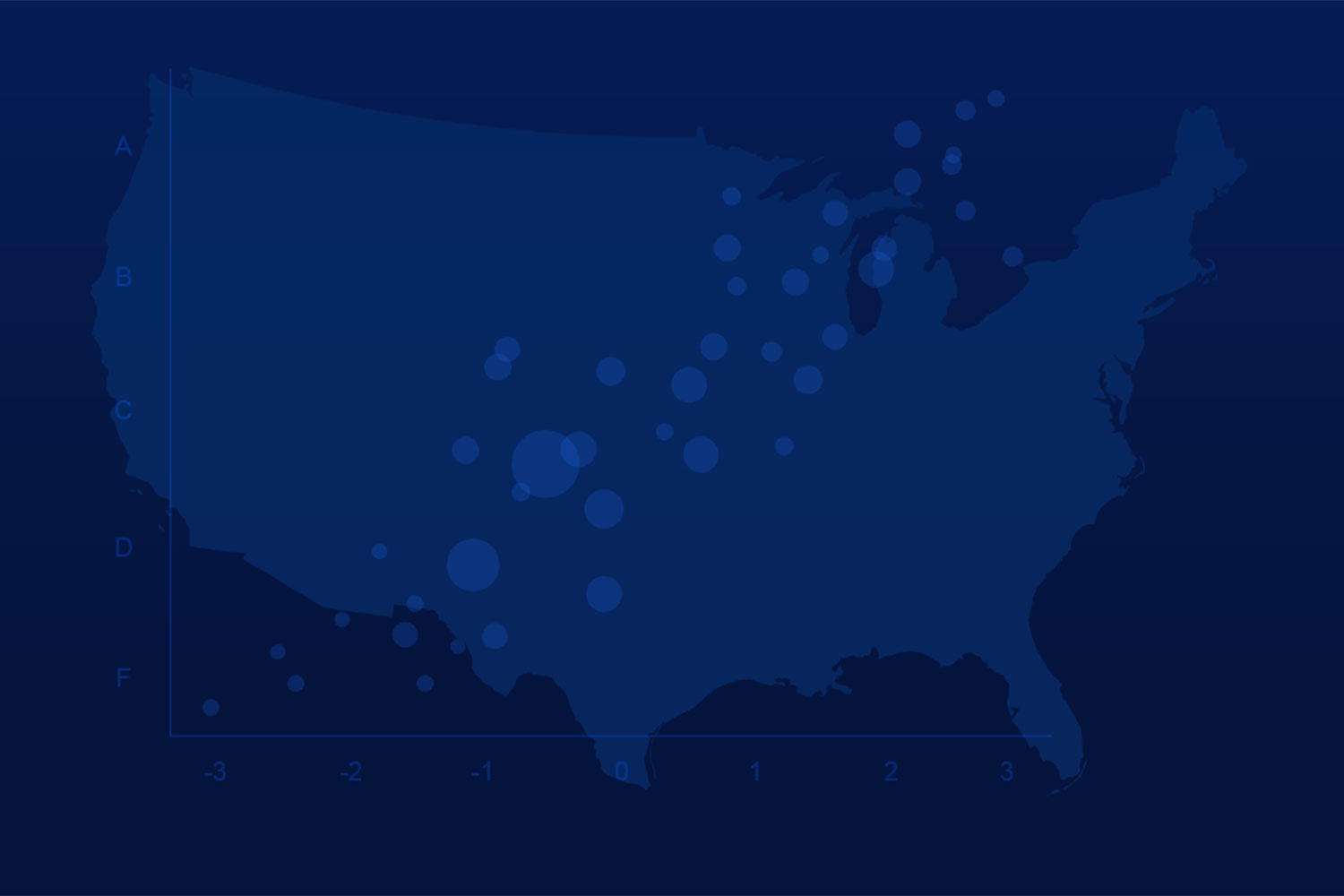 A new interactive data tool from the Educational Opportunity Project at Stanford University will provide extraordinary access to information about academic performance across schools and districts throughout the United States.

The project is directed by Stanford Professor Sean Reardon, Ed.M.’92, Ed.D.’97. The development team that created the new tool includes HGSE Professor Andrew Ho as a principal researcher, along with Erin Fahle of St. John’s University School of Education and Benjamin Shear of the University of Colorado Boulder.

Tests Scores as Measures of Opportunity

The database, first made available online in 2016 in a format designed mainly for researchers, is built from 350 million reading and math test scores from third to eighth grade students during 2008–2016 in every public school in the nation. It also includes district-level measures of racial and socioeconomic composition, segregation patterns, and other educational conditions.

Researchers have used the massive data set over the past few years to study variations in educational opportunity by race, gender, and socioeconomic conditions throughout the United States. The data have also shown that students’ early test scores do not predict academic growth over time, and that poverty (or childhood advantage) does not determine the effectiveness of a school.

Now, with the new interactive tool, members of the public can generate charts, maps and downloadable PDFs to illustrate and compare data from individual schools, districts, or counties.

"If you imagine state tests are separate pieces of cloth, we have found a way to stitch them together in a patchwork quilt,” said Ho. “The result is a national perspective on the geography of educational opportunity. It is an unprecedented view of how our kids are learning in public schools and districts."

“We can also break it down and look at how students are performing differentially by race, by ethnicity, by gender, by family income,” said Reardon. “That lets us understand not just how a community is providing opportunity for everyone, but whether it’s providing the same amount of opportunity for children from different backgrounds.”

A Better Gauge of School Quality

The information on learning rates is a key innovation of the site, Reardon said, because these trends provide a picture of educational opportunity that’s vastly different from what average test scores show.

By indicating how much students learn as they go through school, these rates are “a much better measure of school quality,” said Reardon. “If parents were to use the learning rate data to help inform their decisions about where to live, they might make very different choices in many cases.”

Ho echoed that point. “It was important to us to measure not only average test scores but learning and growth. We know test scores correlate strongly with socioeconomic factors like income and poverty. But our data show that average test scores tell us very little about how kids are learning in schools,” he said.

What’s more, data on learning rates are largely unavailable elsewhere. “Some states and websites provide some measure of learning rates for a community, but their data are typically based on one year of growth, and they aren’t comparable across states,” Reardon said. “Our learning rates are based on eight years of data, so they’re much more reliable.”

Identifying the Effects of School Segregation

In one example of the new tool at work, Reardon and colleagues at the Educational Opportunity Project released a paper today showing that although racial segregation predicts achievement gaps, it is school poverty — not racial composition — that limits educational opportunity.

Racial segregation remains a major source of educational inequality, but this is because racial segregation almost always concentrates black and Hispanic students in high-poverty schools, the researchers find.

With new, accessible evidence for the relationship between test score patterns and socioeconomic status, race, and gender, the Educational Opportunity Project lays the groundwork for more targeted policies to address disparities.

By pinpointing where disparities exist and the factors that correlate with local trends, the project aims to bring researchers and community members closer to understanding how to create more equitable learning opportunities — in and out of school.

Note: Sean Reardon will introduce the Educational Opportunity Project during a live presentation on Tuesday, September 24, at 11:00 a.m. PST. The event will be livestreamed here. The Education Recovery Scorecard, from researchers at Harvard and Stanford, equips state and local leaders with detailed information to re-calibrate recovery plans