Two Change-Makers on Why Education Matters

Congresswomen Ayanna Pressley and Jahana Hayes visit campus to talk about connections between healthy children and healthy communities — and how to build new leadership that's truly representative.
By Bari Walsh
May 29, 2019

As part of Commencement festivities this week, the Harvard Graduate School of Education hosted two members of the change-making 2018 Congressional class, Representatives Jahana Hayes (D-CT) and Ayanna Pressley (D-MA). Both dynamic lawmakers have a strong interest and track record of leadership in education — Pressley from a community-building, whole-child-sustaining point of view, and Hayes (a former National Teacher of the Year) from a classroom-informed, opportunity-and-equity point of view.

We spoke with them in the few moments they had before taking the stage to deliver keynote addresses at Harvard’s Black Graduation ceremony, held in Radcliffe Yard on Tuesday, May 28. The event was organized by the Harvard Black Graduate Student Alliance. 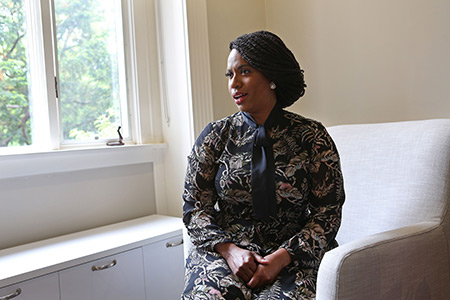 On the abiding importance of education and family:

“We all know that education is life’s great equalizer. But I also believe that family is life’s great stabilizer. You need both, working in symbiotic partnership with one another. That’s why I’ve championed parental engagement, because I know that I’m only here because I had a mother — a warrior and fierce advocate — who made great sacrifices to ensure that I would have that foundation.

“So for me, when we’re taking about scholarship and education, it begins with the health, the wholeness, and the readiness of that student. Or, don’t even use the word “student” — that person. They’re not just vessels of learning. They exist within whole communities, within family structures, in families that are very destabilized by growing poverty, food insecurity, income inequality, displacement, homelessness, fear of deportation, gun violence — I mean, you name it.”

On educating and raising the whole child:

“We can do the work of making sure [educational] facilities are modern and upgraded, and that teachers are treated as the nation-builders that they are … that they’re compensated accordingly, that we have rigor that is holistic and also includes social-emotional supports that set our young people on the pathway not only to scholarship and academic success but to being global citizens and good people. We can do all of that, but if a child doesn’t have a readiness to learn and to receive that, it’s all in vain.

“That view was formed for me based on my own lived experience, because I went to one of the best schools certainly in the city of Chicago, a school called Francis Parker, that my mother made great sacrifices and risked eviction on a month-to-month basis to send me to ….  The school's motto was that school should be 'a model home, a complete community, an embryonic democracy'. Imagine that. I read those faded yellow letters over the auditorium atrium from the time I was 4 until I was 18. That became such an ingrained part of my being.

“So I was at this extraordinary school, but while I was in that school, my family was destabilized by many variables, which — despite the fact that I had tested as a gifted child — I do believe were a barrier to my learning.

“So, based on that lived experience of being a frequent flier in the nurses’ office – and feeling like that was the only place of refuge — and then feeling different and being different in every way from the rest of my peers — all of that has shaped for me why it is so important that we support children in their health and wholeness. Simply because we care, but also in order for them to be their most productive and successful academic selves.”

On the importance of representation:

“Coming to a city like Boston [to attend Boston University], which has many similarities to Chicago — both cities with enclaves of working class immigrant people, affluent concentrations, mayors that never leave, sports teams that break your heart — it’s very similar. However, Chicago had made greater gains in leadership parity than Boston had. I was aware of it, but perhaps not acutely aware of it. I didn’t appreciate how improbable my journey should have been … how improbable that I would ultimately arrive where I am now.

“Representation matters. What is the saying? In order to be it, you must first see it. That certainly is true for me. My sheroes and heroes outside of my mother were people like Barbara Jordan and Shirley Chisholm. Maya Angelou — reading I Know Why the Caged Bird Sings was the first time I knew I wasn’t alone in the world, as a child experiencing abuse and trauma. Maya Angelou, Nikki Giovanni, Sonia Sanchez, Audre Lord, Barbara Jordan … I pored over their oratory, their command of language, their knowledge of history. Even though I never had the privilege of meeting them, I feel very mentored by their example.

“Being a ‘first’ anything is a tremendous blessing, but it also carries with it — I wouldn't say a burden, because that makes it sound negative. It’s a responsibility. Fortunately, whether it be from genetic DNA or ancestral lineage, I have broad shoulders and a strong back, and I can handle it. But the gravity of the responsibility is not lost on me.

“I didn’t have a full appreciation for that until I was elected to the Boston City Council [as the first black woman]. Of course I never ran for that seat to make history — that wasn’t my campaign slogan or mantra or the impetus for my run at all. I ran to save girls — that was literally my platform. It was only after I was elected and I [realized I] was sort of marginalizing what my victory meant. I was just very ‘head down, focused on the work,’ like I am now. And every place I went, I’d be introduced as the first black woman elected to the Boston City Council, and I would caution people and say, ‘Give me some time, I want to actually accomplish something first.’ And then an older black woman pulled me aside and said, ‘Don’t rob us of that achievement. You’re just on to the next thing, but don’t not create space and reverence for that which was accomplished, because that victory doesn’t just belong to you.’” 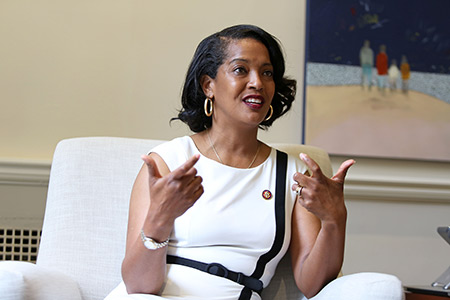 On shifting her lens — from classroom teacher to a member of Congress:

“The anticipation of how different it would be [to move from educator to legislator] is much greater than the challenge. Today I am reminded that not much has changed, from being a classroom teacher to being the National Teacher of the Year and an ambassador for public education, to now being a member of Congress on the House Committee on Education and Labor. My focus, my priorities, my questions remain the same: Is this the education you would want for your child?

“The only thing that has changed is the lens through which I now attempt to answer that question.

“For as much as I thought I didn’t know, I know everything I need to know — and that is that every child deserves access to an equitable, high-quality education, period. Whether they look like you, whether they live in your community, whether they share your experiences, we have a responsibility to educate our children. And I think now, having that idea resonate really makes my level of comfort in this position a lot higher. Because it’s not that different. When I am in a committee hearing, I’m thinking the same way as I did as a classroom teacher. When I’m speaking with constituents, I am attempting to educate them on an issue without injecting my biases or my position. So when people say, ‘You’ve never done this before,’ I feel like I’ve done this my whole life.”

“Kids are malleable, but they have to see it to believe it. I first appreciated [that] in the classroom, when I got my kids involved in service work in their communities and showed them that no matter who they were, they had the ability and the capacity to give and to help. And then to see young people step up and work on my campaign, and to see them follow it all the way through and to see the results of their actions — I know that they will be engaged for life. Young people have to feel needed, and it has to be purposeful and intentional. We can’t just say it. We can’t just talk about it.

“I hear every day from parents and grandparents, from little brown girls — it always amazes me when second- and third-graders know who I am. They’ve heard about Congress, they know it exists, but it never seemed real to them.

“I would always tell my students, in every election, what group do you always hear about? The elderly — you hear about social security or retirement. And I would say, why do you think that is? Because they are the most reliable voting bloc. If you want your voice to be heard, people have to see you, they have to know you are here, and you have to turn out and vote. So now I’m seeing this play out in real time. It reminds you that this work is so much bigger than you, that you are occupying a space in time for a specific purpose.”

The barriers to equity for all — and what it will take to overcome them:

“It’s going to look different in different communities. But I know that we have to provide access to opportunity. We talk about the achievement gap. But that measures test scores and graduation rates. It doesn’t measure anything about creativity, quality of experience, [or] mentorship, and we have to provide all of those to kids. We really have to make an investment in public education where kids get all of these services when they’re in school, all of these supports.

“I came from a family that did not see education as a pathway to success. So if the idea is [that] the only conversations about education and opportunity should happen at home, then we’re leaving out a generation of kids. It’s our responsibility to invest on the front end, because these children will hit our system at some point, whether it’s the education system, the juvenile justice system, the health care system — they will hit the system. So if we make the investment on the front end, and not just schools but whole communities as stakeholders — that’s the only way this is going to work.”