How parents and high schools can refocus of the college admissions process for students to bring ethics front and center.
By Jill Anderson
April 24, 2019 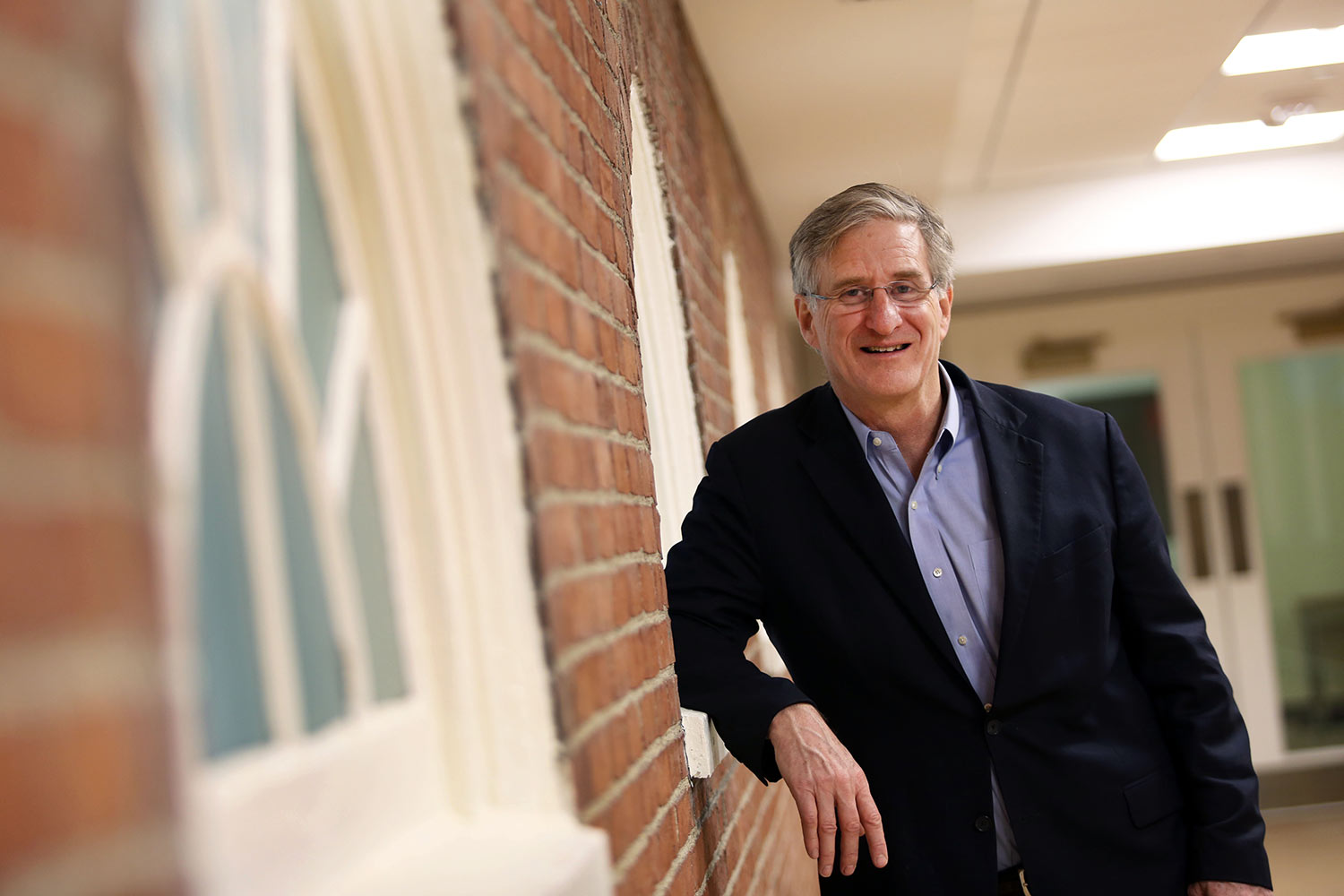 When news about the college admissions scandal broke in March, many parents may have struggled to see themselves in what Senior Lecturer Rick Weissbourd calls a continuum of negative and unethical behavior directed at getting their children into some of the supposed best colleges in the country.

Through his work at the Making Caring Common Project (MCC), Weissbourd is trying to better understand and guide parents, students, and colleges toward a more meaningful, and ethical college admissions process. MCC’s latest report, Turning the Tide II: How Parents and High Schools Can Cultivate Ethical Character and Reduce Distress in The College Admissions Process, calls on parents and high schools to place students' ethical character front and center in the college admissions process. To get there, he’s also calling on adults, especially parents, to be better ethical role models.

Weissbourd also stresses the importance of focusing on finding the best college fit for your child. “What matters in terms of career success and lifetime success is not what college you go to but whether you are meaningfully engaged,” he says.

Harvard psychologist, Rick Weissbourd has long called on parents, students, and institutions to be more ethical, especially when it comes time to applying to college. But with our narrow focus on academic achievement and athletics, it's easy to see how whether you're an upstanding student gets lost in the mix. In Rick's latest report, he's asking parents and high schools to play a greater role and the need to put students’ ethical character first in college admissions. He believes a lot of this work should start with adults modeling such good and ethical behavior.

Knowing this, I asked Rick what he thought when news broke recently about the college admissions scandal, where dozens of parents were accused of allegedly cheating and bribing their children's way into college?

Rick Weissbourd: And I guess I had this dual reaction. One reaction was, it's good, this is getting public attention. But the other reaction was that parents might not see themselves in it. It's fraud, it's breaking the law, some of it seemed really dumb to me. It is part of a continuum in some ways that the deck is stacked, it is an unfair system. There are a lot of people in legal ways who are rigging the system. Writing letters to admissions officers to sabotage the prospects of other students from your own kids school that are applying to that college or getting on your kids email and writing emails to a college admissions officers as if they're coming from your child.

And also, you're telling your kids not to share information about the colleges they're applying, like treating every other kid as competition for your child, rather than helping your community, helping the kids in your community get to college. But then there's the other things. There's people giving huge amounts of money to get their kids into college. There's athlete preference, there's legacy preference, I mean, that are a lot of people are participating in. There's getting SAT tutors in the 9th through 10th grade. There's getting college consultants in high school with no sense of equity or fairness.

Those kind of things are much more mainstream and far more common than this college admissions scandal, and that's really where I feel like our attention should be. There are some kids who don't do well in the SAT, they're poor test takers. There may be a message to get your kid an SAT tutor in a circumstance like that. There are reasons to support your kids in their essay writing for example. The problem is that this stuff has gotten so extreme that people are getting SAT tutors even when their kids are decent test takers. And they're getting SAT tutors in the eighth and ninth grade.

The problem is not just supporting your kid in writing and essay, but it is your voice intruding on your kid's college essay, or you're over editing your kid's college essay. There are certain categories of things here that I wouldn't describe as unethical, but there are other categories of things that I think have become so extreme and reflects so little consciousness about equity and fairness that I do think they're unethical.

Rick Weissbourd: So, when we talk about ethical character, we're mainly talking about kids who care about others, care about the common good, are contributing to their communities, have some sense of equity and fairness. And what we're saying is that colleges are sending powerful messages to kids. And the messages they're sending very loud and clear are that academic excellence is important to us, the number of academic accomplishments you have is important us, athletic ability is important to us. In that context, it seems irresponsible not to send the message as well that we care about other things. And whether you're a good athlete or whether you're good in school, we care if you're a good person or not in the sense of being somebody who is mindful of others, cares about others, contribute to their community.

Jill Anderson: Do you think one of the difficult aspects of that is it's a hard thing to measure. Like it's so easy to measure on a test or even in sports, but how do you measure something like ethical character? Maybe you don't.

Jill Anderson: How can parents be ethical role models for children, especially through this college admissions process?

Rick Weissbourd: We're suggesting a few ways that are important. One is not confusing your needs with your kids. You know, one way to be an ethical role model is to be other centered and empathic. And that includes in the college admissions process, to really listen to your kid, to find out what's the right college for them, to not let your status concerns drive this process or your desire for your kid to reproduce your own college experience. Also, to role model in the sense that you can't fudge about your community service. I'm not going to write your essay for you. We're not going to misrepresent in any way in the college application process.

And I think also to engage your child in this conversation about equity and fairness. I mean it depends where you are on the economic spectrum, but particularly for affluent families, I think it's really important to talk to your kids about the advantages they have on this process, the ways the deck is stacked. And we find in our interviews with kids, they're very aware of those inequities, they're very aware of the unfairness.

Jill Anderson: What about guides for high school? That was also part of the report that you just put out. We also have tips for high schools. And I hadn't really thought about them as contributing to the problem, even though it seems so obvious when I think about it.

Rick Weissbourd: There are a number of things that high schools can do. I think particularly in affluent communities, it is really important to get kids focused on a much wider range of colleges. I mean a lot of what is driving this crazy achievement pressure is that people think there are 30 or 40 great colleges in the country and they're trying to shoehorn their kids into those colleges. When the reality is, and the data really support this, is that there are hundreds if not thousands of great colleges in this country. So they really have to make the case strongly to parents and persuasively that there are a lot of colleges out there that are great for your kid.

Jill Anderson: So, few kids finish school, finish college and earn their bachelor's degree. I wonder if parents are even thinking about, we should be trying to find a school that is going to be a good fit.

Rick Weissbourd: I think what you're saying is exactly right. I mean, for the great majority of parents out there, the biggest issue is finding a course that's affordable because the debt issue is so enormous. And it's finding a course that's really committed to your kids completion. These are huge issues for parents out there. And the other thing I will say in terms of your point about fit, which is very important, is what the data show in a recent paper by Challenge Success at Stanford makes this case, is that what matters in terms of your career success and lifelong success is not what college you go to but whether you're meaningfully engaged in college.

Jill Anderson: You have gone through the college admissions process, as a parent, did you struggle with some of these cultural issues?

Rick Weissbourd: I did. I had a moment with my son that was very, I don't know, important and revealing to me. We were on a walk one night and I remember saying to him, I said, I just really want you know the status doesn't matter to me, I really want you to go to a place that's the right fit, a place that you're going to be really meaningfully engaged. He said basically, Dad, that's a crock of crap. You teach at Harvard, all the people in my community are applying to these high-status colleges. And he was sort of saying you can take the high road about this because you know there are all these forces that are doing the muscling for you.

And it was a sobering moment for me because I realized to a certain extent he was right. I hadn't really thought a lot about all these forces that are pushing him in one direction, and what I really had to do to be able to counteract those forces meaningfully. And after that, I've had more authentic conversations with my kids. And I've really tried to dig into myself some and to think about the ways status and power and things like that influence how I think about these things, and demand some of those feelings.

Jill Anderson: How do kids go about finding the right fit for them?

But I think a lot of people should be trying. This is really an area where technology can be very helpful in trying to get better information to kids about colleges. I also think that it's important in economically diverse communities that people with privilege have some responsibility to expose people who don't have privileges to a wide range of colleges and to share information. We have schools that are collaborating on an Institute, where wealthy schools are sharing information with schools in low-income communities called search resources. Guidance for counselors, connections to admissions officers, I mean important resources. But that's another thing high school can do is share information.

Jill Anderson: Rick Weissbourd is a senior lecturer at the Harvard Graduate School of Education, where he also leads the Making Caring Common project, a national effort to make moral and social development priorities in child raising. He is the author of many books, including The Parents We Mean to Be: How Well-Intentioned Adults Undermine Children's Moral and Emotional Development.

I'm Jill Anderson, and this is the Harvard Ed class produced by the Harvard Graduate School of Education.