The Power of Conversation

With her game, "52 Essential Conversations," Jenny Woo, Ed.M.'18, has created a tool for parents, caregivers, and teachers to support children's social-emotional development.
By Jill Anderson
September 10, 2018 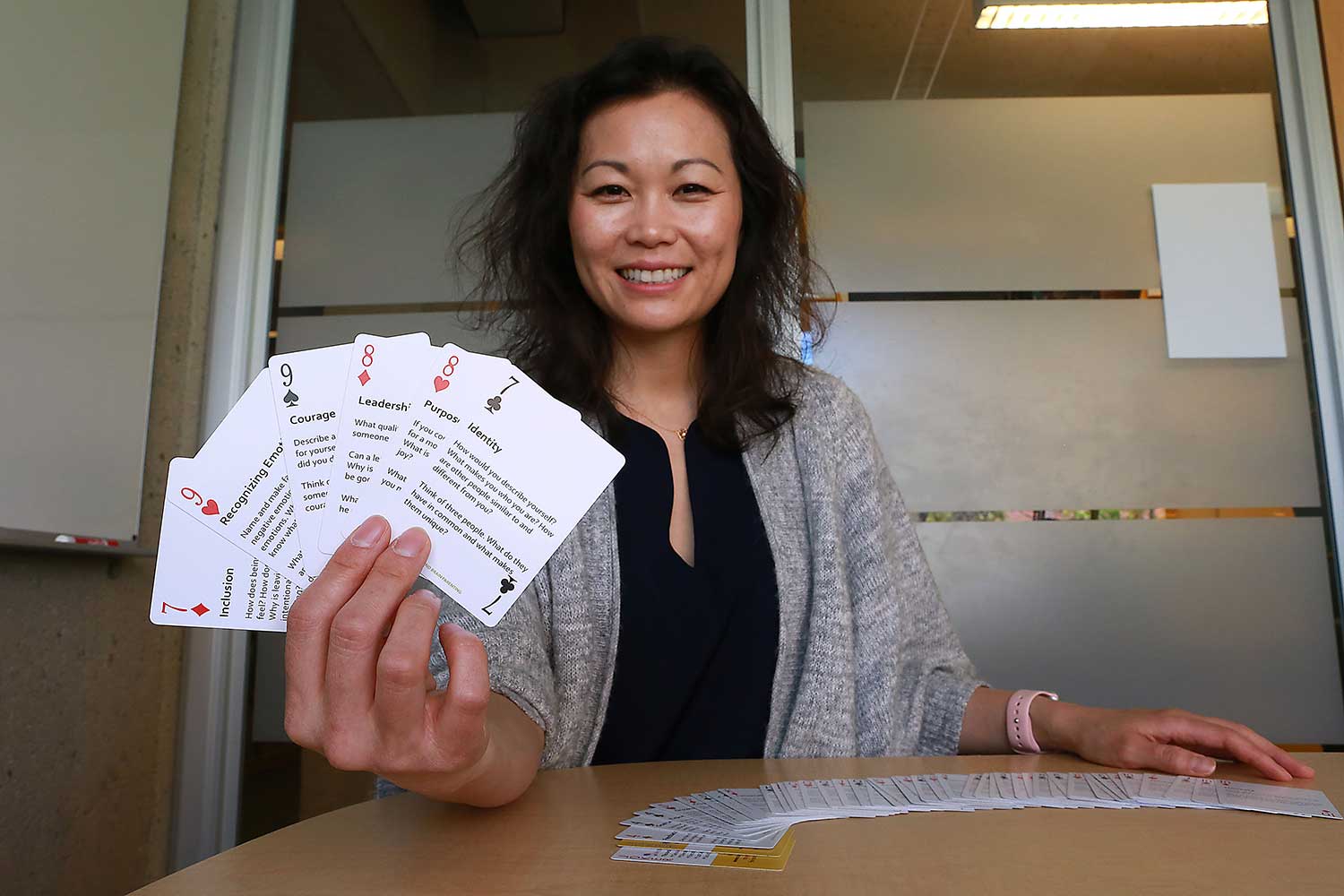 As a student in the Mind, Brain, and Education Program at HGSE, Jenny Woo often found herself wishing that other parents could hear what she was hearing in her classes. “It would ease the angst,” says Woo, Ed.M.’18. She knows that today’s busy parents can feel overwhelmed by an internet-driven world filled with information, opinions, and “expert” advice on how to raise children. The questioning and doubt that sometimes results can be paralyzing. “As a parent, you want to know what is right,” says Woo, a school administrator, cognitive neuroscience researcher, and a parent herself.

But raising children doesn’t have to be an anxiety-ridden experience, she says. Instead a lot of the noise can be made quieter through the simple act of talking with your child. That’s why she created “52 Essential Conversations,” a deck of social-emotional learning cards for parents/caregivers and their children.

“I want to empower parents and caregivers to have conversations in [their] day-to-day lives,” Woo says. “52 Essential Conversations” helps by guiding parents through potentially difficult or awkward conversations, and providing them with ideas about which questions they should be asking.

Designed for ages 5 to adult, the cards cover six categories (self-awareness; relationship skills; self-management; social awareness; responsible decision-making; and diversity, equity, and inclusion) and ask questions such as What is fairness? or What is luck? They can be used in a multitude of ways — as conversation prompts during dinner or daily errands, or in place of playing cards in a game of Go Fish. Aligned to the Collaborative for Academic, Social, and Emotional Learning, a nationally recognized social and emotional learning standard, the cards allow parents and children to learn about one another while developing children’s life skills and preparing them for the world.

“52 Essential Conversations” is a culmination of Woo’s diverse career, which has included research, coaching of business professionals, and administration for a network of Montessori schools. Throughout, she has pondered questions of cognitive development, how people change, and especially how parents/caregivers can foster children’s growth. The latter was on Woo’s mind when she enrolled in the Ed School, and through her classes, she began to see potential answers. In creating “52 Essential Conversations,” Woo sought to encapsulate her learning experience at HGSE in a usable and actionable way for parents.

Over a two-week period in April, while still a master’s student, Woo brainstormed and created the prototype for “52 Essential Conversations,” and by early May had launched a Kickstarter campaign, where interest in the cards soared. Since officially launching in June, the cards are being used in homes and classrooms in more than 40 states and 20 countries, and even in some psychologist and pediatrician offices. Though Woo intended for the cards to be a tool for parents, she realized early on that educators could also benefit from them, so she recruited former colleagues and peers to try them out. From circle time to writing prompts, “52 Essential Conversations” has proven to be a useful classroom tool. Recently, Woo has extended the brand with the launch of a podcast series in which in each episode she discusses one of the deck’s questions with an expert in the field.

There are no right answers to the questions posed on the cards, Woo stresses, whether you are a parent, a teacher, or an expert. Rather, it’s about exploring values and experience through role modeling.

“Be who you are. Share your personal story, and be on the learning journey together with your child,” Woo says. “Nobody has the right answer, but if you can be vulnerable, open yourself up, and learn together — that’s the true beauty of parenting. You don’t have to know it all.” With a new app — and an appearance at this weekend’s Alumni of Color Conference — alum Samantha Pratt brings urgency to conversations about mental health and trauma in schools. A new virtual reality project aims to help teachers develop and practice their skills before they enter the classroom.