In his Capstone, Sparks looked at multiple pathways for students to succeed, including early interventions.
By Andrew Bauld
May 29, 2018 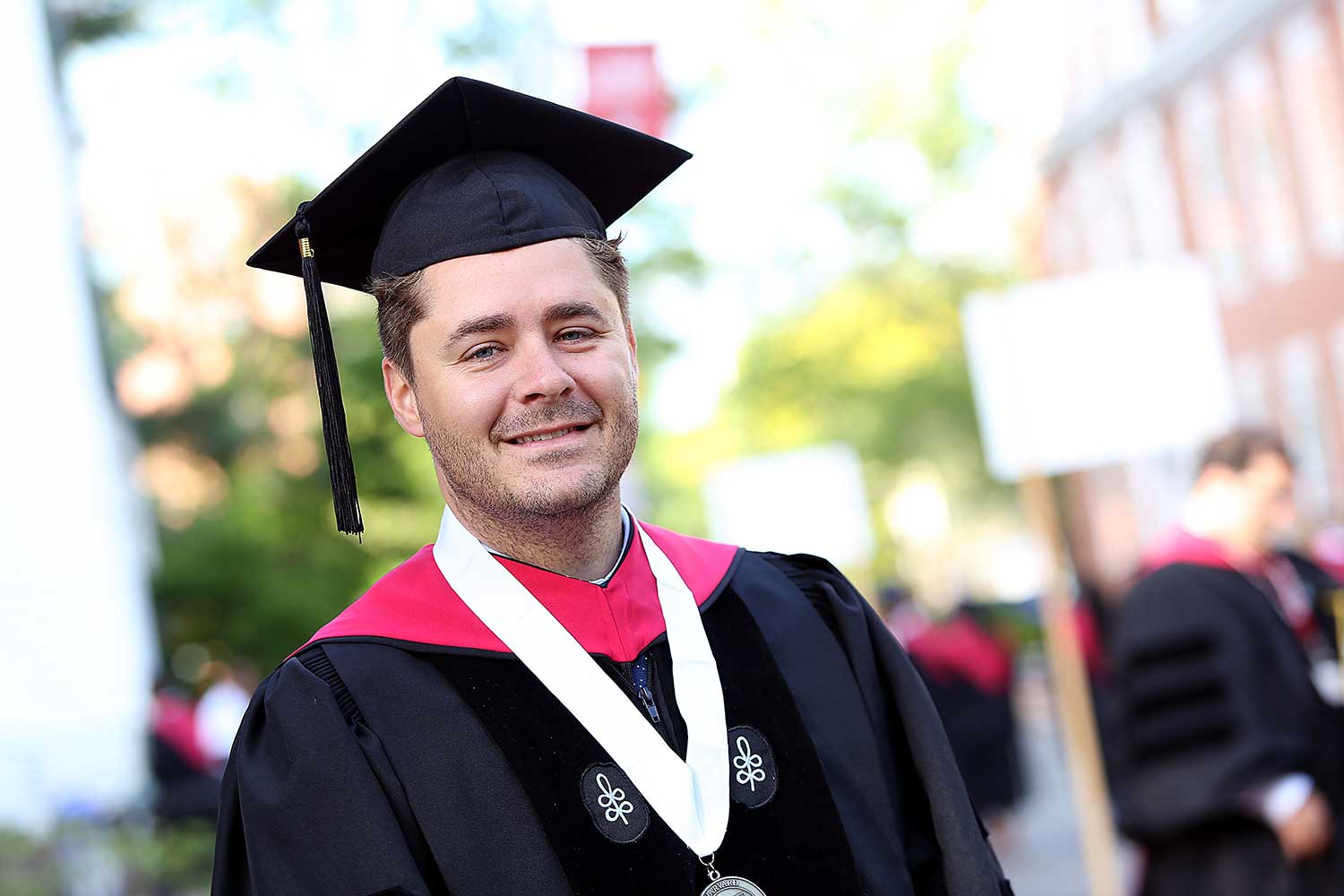 As with all the seniors, the counselors alone determined placement, and Sparks was not college bound.

“I asked to be transferred,” says Sparks, hoping to be one of the first in his family to go to college, but he was denied. “I was told people who came from my side of town don’t interact with the college counselor.”

That would set Sparks, Ed.L.D.’18, on his own path, inspired not only to make it to college but to teach and become an education leader intent on providing access and opportunity for all students. Now, he was chosen to lead his graduating cohort as commencement marshal.

Sparks came to HGSE following an early career as an elementary and middle school teacher and preK–8 principal in Charlotte, North Carolina. Sparks understood the classroom, but he wanted to learn to be a systems wide leader.

“I taught for a long time, but there were things I didn’t understand around the politics of running a school district, the business side of leading change,” Sparks says.

For the past three years, Sparks has been inspired by his HGSE cohort and faculty, forming a “coalition” to work on new ideas. And while Sparks says he expected to learn to become a leader to inspire others, he wasn’t expecting to learn so much about himself.

“I think one of the coolest things about the Ed.L.D. Program is you do a lot of introspective work,” Sparks says. “It’s a lot less about how do you lead change and get people to do the thing you want; it’s ‘Why the heck do you even care about the things you care about?’”

With his elementary and middle school background, Sparks realized after talking with high school students at his school site that the district wasn’t doing enough to intervene in the early years, and so Sparks designed a framework to establish new ways of supporting students with increasingly diverse needs that might otherwise prevent them from reaching graduation.

“How do students remain on track through early interventions? How do they recuperate when they fall off track? And how do they recover when they disconnect, drop out, or aren’t showing up to school,” Sparks says. “I use that framework to build an approach to help us be more intentional during a student’s entire academic career and not just at the tail end.”

Working at the Oceanside district level and seeing a variety of schools, Sparks says he has come away from this year with even greater appreciation for alternative and flexible school models.

“Coming out of this residency, I am much more of an advocate for flexible learning and alternative schools,” Sparks says, citing work on an independent study program which allowed students to work online as well as one-on-one with teachers, in some cases allowing them to work a full time job to care for families of their own.

Sparks also saw what a relief the classroom could be for many of his students.

“In Oceanside, there is a lot of gang activity, and a lot of students won’t cross certain lines depending on what neighborhood they are from,” Sparks says. “My school was at a neutral site and it’s a unique spot where students can come and check things at the door and just be students.”

While he’s learned a great deal of the politics and business side of education leadership, Sparks says above all is the message of his Capstone adviser and mentor, Marshal Ganz: “Leadership is about accepting responsibility to create conditions for individuals to achieve shared purpose under uncertain conditions.”

“What I was learning to do was create conditions to find shared purpose under all the uncertainty,” Sparks says. He’ll put that lesson to good use when he moves into a full-time interim director position with Oceanside following graduation.

And he’ll continue to help students find new pathways to success, toward college and beyond.

“Working with students in the alternative school, I thought, ‘Why were students assigned there, and did the district offer opportunities or have barriers up?’” Sparks said. “As a systems level leader, people’s access and their opportunity is the intersection of where I will do my work.”