Al-Adeimi’s dissertation takes a closer look at 42 classrooms and how the quality of class discussion can greatly impact students’ writing of persuasive essays.
By Jill Anderson
May 30, 2018 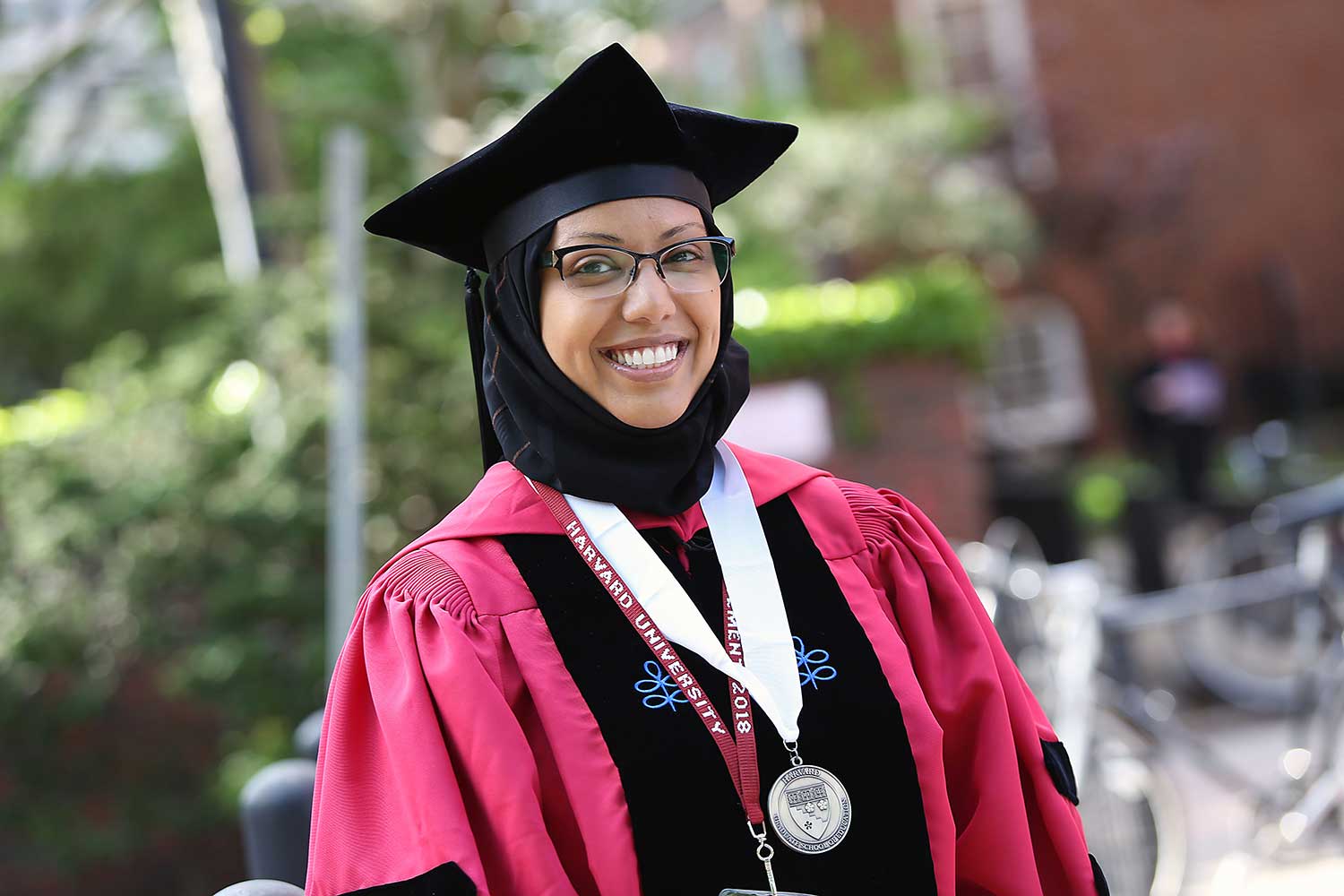 It’s hard to believe that there was a time when Shireen Al-Adeimi, Ed.D.’18, wasn’t sure about education research as a career. In fact, she hadn’t even intended to apply to HGSE, but thanks to a push from her adviser at the University of Michigan who urged her to submit the application, Al-Ademi is not only leaving HGSE with a dissertation and diploma, she has also found her calling.

“HGSE has really given me the opportunity to do things beyond my comfort zone,” she says, admitting that she never imagined becoming a quantitative researcher, though everything she learned about statistics and conducting research has reframed how she approaches even the types of questions you can ask.

Yemen-born Al-Adeimi had not considered a career in education because of her personal experience in the system as a child, when she moved often with her academic parents — first to India, then back to Yemen, before ultimately settling in Canada as a seventh-grader. The issue of language proficiency followed Al-Adeimi from one country to another. Although she was able to speak Arabic, the Yemeni teachers did not know what to do because she wasn’t able to write it, and later in Canada, she was placed in an ESL (English as a second language) program, even though she could speak English fluently and had passed placement exams. Within months, she was allowed to take non-ESL English courses upon proving how well she did. But still the question of language and writing would follow her post-college, when after earning a degree in psychology, she volunteered to teach Arabic for fourth- and fifth-graders.

“Seeing how excited the children were to learn something new connected with me,” she says, noting that she fell in love with teaching in the classroom.

Al-Adeimi followed up by earning her teaching credentials in Canada, but when she eventually moved to the United States and took a job teaching sixth-grade English in Albuquerque, New Mexico, to predominantly low-income, linguistically and culturally diverse students, questions began to arise. “I felt I didn’t know how to do my job in that context,” she says, adding that even with all her education in teaching she struggled, though she truly loved working with the kids.

Eager to understand more about education in a U.S. context led her to graduate studies at the University of Michigan where she learned about academic language — a topic that became a driver in her research and work — and about HGSE, particularly the work of Professor Catherine Snow. She came to HGSE hoping for the chance to work with Snow, which became a reality shortly after coming to Appian Way when she got a position in Snow’s lab.

During her time at HGSE, Al-Adeimi became deeply entrenched in studying dialogic discussion in the classroom after working with Boston University Professor Catherine O’Connor (also current dean of the School of Education) on the creation of an instrument, the Low-inference Discourse Observation tool (LIDO), that captures research-based indicators of class discussion by students and teachers. Over the course of three years, Al-Adeimi coded 500 audio tapes based on student and teacher conversation in an attempt to better understand the connection between discussion and writing.

Al-Adeimi’s dissertation takes a closer look at 42 classrooms and how the quality of class discussion can greatly impact students’ writing of persuasive essays. First, she explored how teachers ask questions and frame discussions in classrooms. Not surprisingly, a highly-dialogic teacher-led discussion resulted in higher essay scores, whereas a low dialogic discussion, produced by teachers and students, was associated with lower essay scores. Then, she examined what students were saying in the discussions and how that impacted essay scores. “What I thought would really help with writing had the opposite effect,” she says, explaining that the higher dialogic discussions among peers seemed to negatively predict writing.

“It tells us that just having student talk is not enough and that we need to look closer at the quality of the talk,” she says, noting that this includes many variables such as the differences between teachers, the discussion format, and considering how students relate this in their writing.

“We learned what we thought we would about teachers,” she says. “But the students completely threw us off.” She concludes that what may look like dialogic student in form does not necessarily indicate dialogic talk that improves learning and thinking.

As Al-Adeimi moves on from HGSE and settles into her new position as a faculty member at Michigan State University, she plans to continue conducting research on this topic by taking a closer look at how the quality of classroom discussion influences writing. In his Capstone, Sparks looked at multiple pathways for students to succeed, including early interventions.