Having Faith in Education

Senior Lecturer Irvin Scott sees possibilities in the interconnections of faith and ed.
By Jill Anderson
May 15, 2018

When Senior Lecturer Irvin Scott, Ed.M.’07, Ed.D.’11, took the stage at the HGSE 2017–18 student orientation he did what no one else had done that day. He sang. Out loud. In front of 800 new students, some faculty, and staff. But, perhaps even more surprising, were the words he sang: 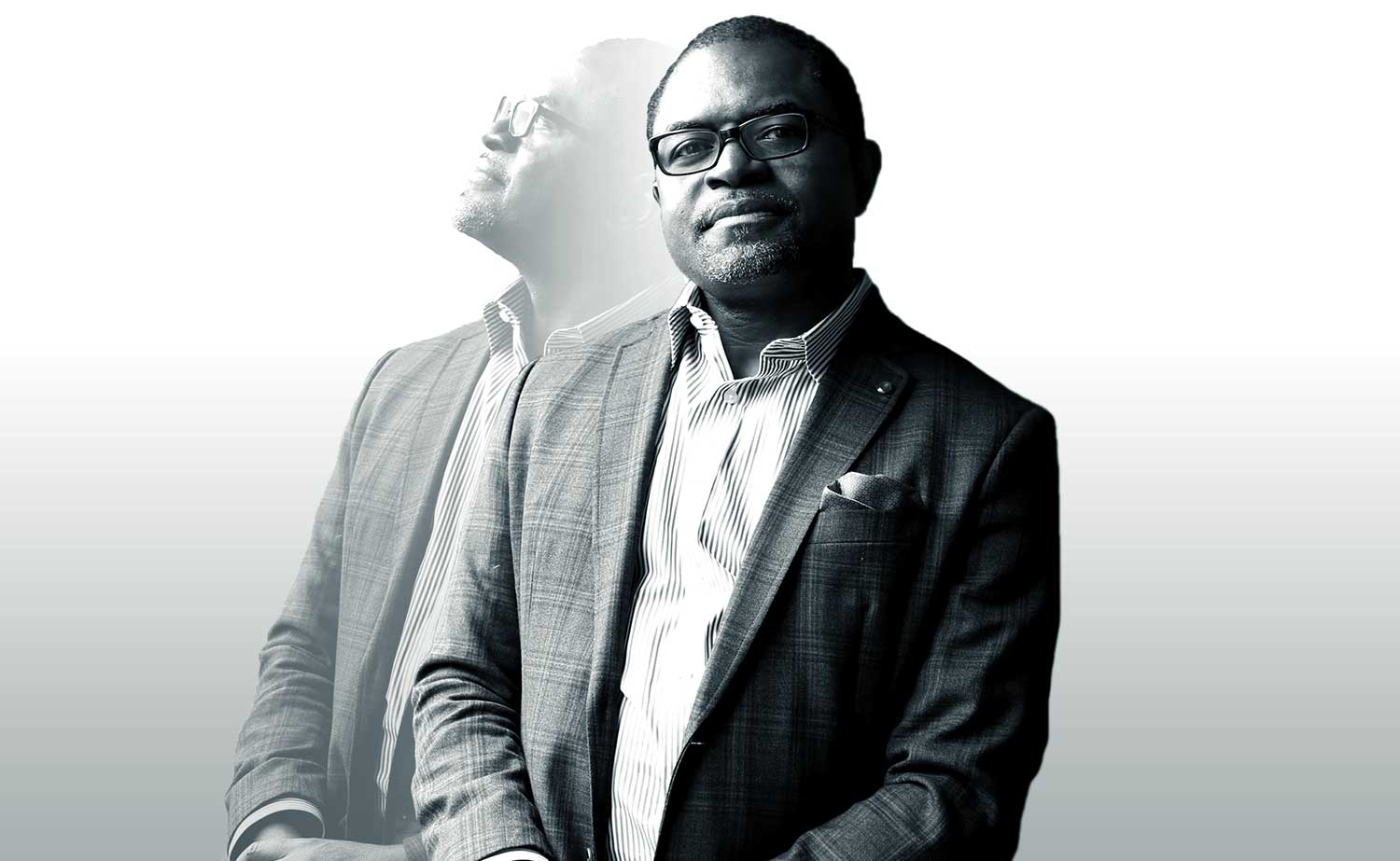 Scott sang the gospel song to close out an eight-minute introduction to his work exploring the interconnections of faith and education.

“Do you know what happens when people sing together…,” he asks pausing a few seconds before answering, “Their hearts begin to beat together. Whenever you sing together, you have to breathe at the same time.” In his office on the fourth floor of Gutman, Scott breaks again into singing, this time scales in different keys: “La, la, la la la…"

"You can’t do that without your heart getting into the same rhythm,” he smiles.

Scott’s penchant for song is equally matched by his passion for faith and education. With 300,000 multi-faith congregations in America and nearly 48,900 high poverty schools, Scott thinks it’s important to leverage faith in education, otherwise it’s a “missed opportunity” for educators.

Scott knows firsthand how a strong religious foundation can influence a student’s life. It’s something he recognized while growing up in Chambersburg, Pennsylvania, where his pastor father and mother raised him and his five siblings to have a love for God, faith, each other, and learning. But as he grew older, Scott sensed a disconnect between what happened at home and church compared to what happened when he went to school. Faith was not a part of his schooling — rather it was a part of his identity that got left out in schooling.

Of course, as an adult, Scott now understands the subjects of spirituality and faith can be touchy, especially for educators. "People are afraid to go there," he says. Though Scott has no interest in indoctrination, and fully supports laws separating church and state, he also doesn’t see it as a black and white issue. "Just because there's a separation between church and state doesn't mean kids aren't going to come to school with deep beliefs and a human desire to have a part of their existence touched, which doesn't necessarily happen just through academics," he says. "I think spirituality and faith is a critical part of most human existence. I have learned over time how to embrace those things and still do what I do in public education.”

Navigating what Scott calls his "dual existence" of being a strong person of faith and teaching and leading in public schools while respecting individuality was a unique part of his position as an ordained elder and educator. Scott didn’t know growing up or even after enrolling in Millersville University — a school known for training teachers — that he’d one day find himself teaching. “I didn’t go there with a goal of becoming a teacher,” Scott says. “I went there because they accepted me.”

He admittedly wasn’t the best student in high school. He was more interested in sports — football, to be exact. But while at Millersville, he was encouraged to work on writing, and became passionate about literature. After graduating, he started teaching English (and choir) in a high school classroom — where he would spend the first 15 years of his education career. Scott loved having the opportunity to share his passion for literature with students, which drove his love of teaching. He even fell in love with a math teacher — Kisha — to whom he’s been married for 27 years, and with whom he has three sons.

He keeps reminders of teaching in his office today; not far from reach are a collection of books that he used as an English teacher. Scott pulls out a copy of The Complete Works of Shakespeare from 1987. "It's academic sentimental stuff but it’s kept me in touch with where this all began for me, which was the classroom," he says. "I loved, loved the classroom. To me, that's where all roads lead back — teaching and learning."

Even after he left classroom teaching, taking a position as a principal, he found himself eager to learn more and make a larger impact on the education field, so he enrolled in HGSE’s Urban Superintendent’s Program under the direction of Professor Bob Peterkin, and took on positions as assistant superintendent, and eventually, chief academic officer in Boston Public Schools.

Explaining his career path now, Scott takes out a black marker and approaches the white board adjacent to his desk. There he draws three interlacing circles — parts of the education ecosystem — signifying the local, the state, and the national levels. Then, on the outside of those circles, he draws asterisks or what he calls “North Stars” or drivers of his work to reach all students.

From afar, his decision to join the Gates Foundation as the deputy director of K–12 education in 2011 might seem like a divergence from the classroom — but, for Scott, it was an opportunity to impact a greater number of children throughout the country. After all, traveling the country for the Gates Foundation is how he began to get an even bigger glimpse at the issues that all school systems and teachers face throughout the country. As part of his five years at Gates, Scott led an investment of $300 million in initiatives focused on transforming how teachers are recruited, developed, and rewarded.

Then, in 2015, Scott was invited to come back to HGSE as a faculty member. Scott knew some people would view his foray into higher education as a sign that he was nearing the end of his work, but he saw the opposite — opportunity. “I wanted to test another innovative idea out,” he says, noting that he could now explore the intersection of faith and education, and also teach again — this time about school and system leadership.

Since joining HGSE as a faculty member, he has taught a course — favored by students in the School Leadership (SLP) master’s program and the Doctor of Education Leadership (Ed.L.D.) Program — about ways to change the sector, and organizational development and leadership where he’s quickly become known for being a compassionate, genuine person and good listener.

“Irvin is one of the most approachable professors I know. When you walk into his office the first question he asks is ’How are you?’ He waits for an answer because he genuinely wants to know,” says Angela Jackson, an Ed.L.D. candidate and a teaching fellow for Seminar and Practicum for School Developers in SLP's Instructional Leadership strand. “Irvin has an instant rapport with everyone he meets. He is vulnerable and transparent. I see how these traits bring students closer to him while increasing the learning outcomes in our classroom environment.”

Randy Testa, associate director of preK–16 programs for HGSE’s Professional Education program, echoes similar sentiments, calling Scott the “real deal.” Testa met Scott years ago at the Gates Foundation and later reconnected at HGSE, where they shared conversations about the significance of faith and education. “We started talking about whether there could be some program in professional education that brought faith and education leaders together,” Testa says.

Hence the development of the Leaders Institute for Faith and Education (LIFE), with the support of the Gates Foundation, where Scott and his team will bring leaders of faith and education together. There, Scott hopes to address questions like: What role is there for faith communities to become more engaged partners in the work of improving student outcomes? What tools and resources might they need to increase their capacity to be engaged? Are there opportunities for educators to learn from faith communities regarding how to serve America’s most vulnerable children and communities?

By the end of 2018, Scott hopes to have more insight into these partnerships, and how to effectively reach the overarching goal of increasing education outcomes for all students with the help of faith-based organizations.

“Faith is critically important for community. I come with deep experience around teaching, learning, and leadership. It’s still my heart, my passion. I still think you have to do great work in those spaces if I’m going to get to that North Star,” he says, pointing back at the white board. “You can’t get there just by saying, ‘Let’s have better partnerships with community organizations and faith-based organizations.’ You can’t get there just by saying, ‘Let’s have kids sing more.’ … You only move things here if you have a great curriculum, great teaching, great assessments, great professional development. I'm passionate in those places and spaces and that has been a lot of my life, professionally, which was kicked off as a result of my deep experience in the classroom.”

But, in the meantime, as Scott wrestles with the idea of being a person of faith in education and what that can look like in communities, he insists that starting with a little bit more singing still wouldn’t hurt. How educators can push back against hidden curriculum and the inequalities they may reinforce in the classroom.