Associate Professor Sarah Dryden-Peterson received the Palmer O. Johnson Memorial Award for an article on pathways to educational success among refugees that was published in the American Educational Research Journal.
By Casey Bayer
April 25, 2018 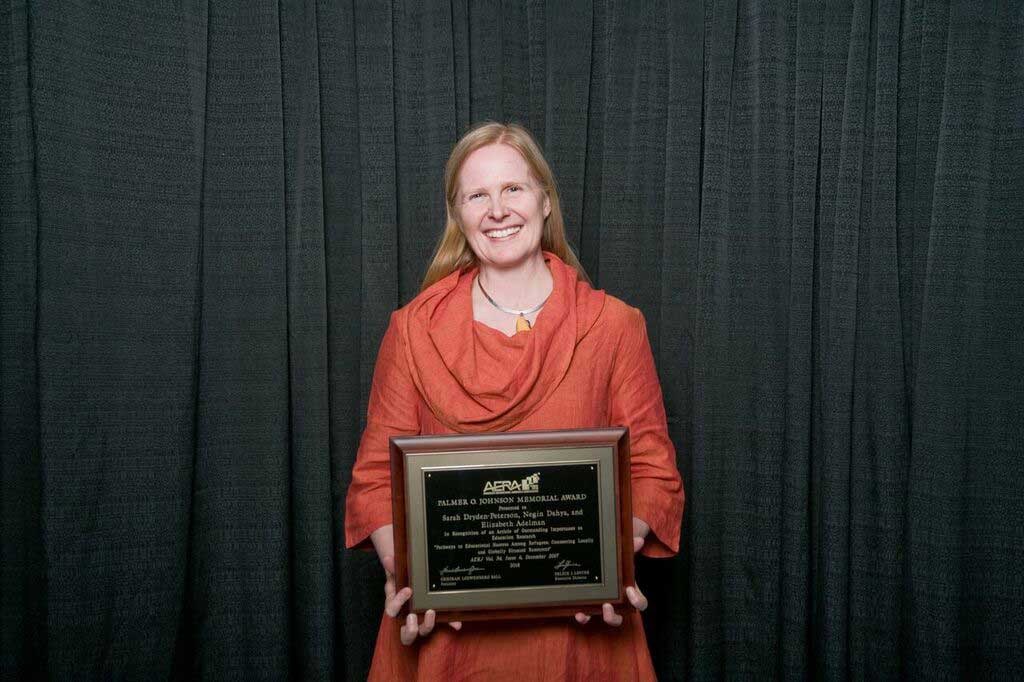 Their paper, “Pathways to Educational Success Among Refugees: Connecting Locally and Globally Situated Resources,” found that while international aid is fundamental to the trajectories and journeys of refugees, it is insufficient. Refugees’ relationships with family, friends, and teachers provide critical motivation and mentorship needed for their academic success.

"We have written a theory of locally and globally situated educational supports for refugee students. We are inspired by refugee young people, who are the ones who have created this theory by living it,” said Dryden-Peterson in her acceptance speech. “The recognition of this award is most meaningful to us in signifying attention to marginalization that crosses national borders and a wider audience committed to thinking about the role of education in inclusive global communities.”

In their study, covered by Usable Knowledge, Dryden-Peterson and her fellow researchers analyzed 248 surveys of Somali refugees who had completed secondary school – half of whom had done so in a refugee camp – and conducted 21 in-depth interviews with Somali secondary school graduates in Dadaab camps. The team’s work is mixed-methods research, was designed to address what, how, and why questions that researchers and practitioners have about refugee education with goals of creating educational opportunities for all.

“The number of refugees globally is at historically high levels, but the experience of forced migration and exile are not new,” said Dryden-Peterson. “While North Americans have recently become more aware of refugee experiences, given media coverage of the conflict in Syria, our article focuses on long-standing conflict in Somalia, a refugee camp in Kenya that was built in 1991 but continues to exist, and refugee young people whose experiences of education in long-term exile can help us think more proactively about the kinds of education that can best prepare refugee young people for their futures.”

This work forms part of Dryden-Peterson’s, and the team’s, larger research program on refugee education, conflict transformation, and inclusive communities. Dryden-Peterson and Dahya have ongoing research in Kenya, which builds on findings from this paper to look at ways in which teachers connect virtually in discussions of classroom practice, pedagogy, and decision-making. In addition, Dryden-Peterson and Adelman are collaborating on ongoing research in Lebanon that continues to investigate the kinds of supports that refugee young people draw on to be successful in school, focused particularly on the role of national and refugee teachers in both public and non-formal schooling. Harvard EdCast: How We Can Better Support Refugees in Education

Associate Professor Sarah Dryden-Peterson talks about the ways we can better support refugee children and teachers in education around the world. Sarah Dryden-Peterson on how governments and education systems around the world can create safe, welcoming spaces for displaced students.