MIT Professor Mitchel Resnick reflects on why nurturing creative thinking is so important — in kindergarten and beyond.
By Iman Rastegari
December 14, 2017 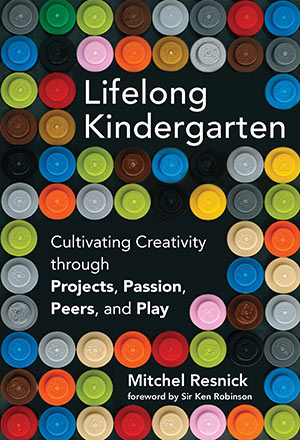 The concept of kindergarten — as a place for young children to learn by interacting with materials and people around them — has existed for over 200 years, but never has the approach been so suited to the way the world works as it is today, says Mitchel Resnick, the LEGO Papert Professor of Learning Research at the MIT Media Lab.

“That approach to kindergarten is really aligned with the needs of today’s society," says Resnick, citing the need to adapt to the speed at which things change in the world. "As kids in the traditional kindergarten were playfully designing and creating things, they were developing as creative thinkers…. That’s exactly what we need.”

Being given the room to explore, experiment, and express oneself is vital to becoming a creative thinker — and to the learning process as a whole — says Resnick, author of Lifelong Kindergarten: Cultivating Creativity through Projects, Passion, Peers, and Play. If people aren't encouraged in their creativity at an early age, and if this isn't nutured throughout their schooling, then they aren't as prepared to deal with the unexpected when it arises.

“We’re trying to spread that approach to learners of all ages," says Resnick, who also leads the Lifelong Kindergarten research group at MIT. "We want to take what’s worked best in kindergarten and here at the Media Lab and provide opportunities for all kids of all ages to be able to explore and experiment and express themselves in that same spirit.”

In this edition of the Harvard EdCast, Resnick talks about the importance of nurturing creativity in learning and explains why kindergarten is the greatest invention of the last millennium. A conversation about the impact of COVID on school nurses and why every school needs a nurse. A look at the role of school boards and the current debates playing out at school board meetings.