A leader in the field and at HGSE, Jewell-Sherman is recognized for her contributions to urban education and to the development of future education leaders.
By Casey Bayer
September 21, 2017 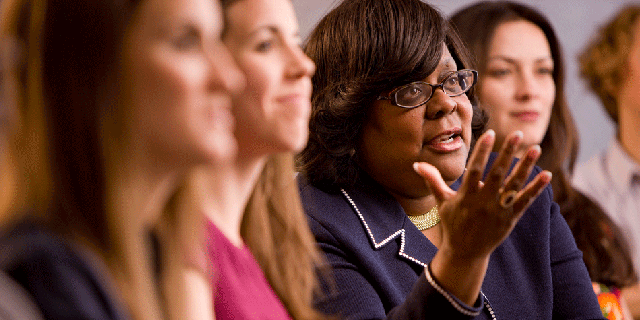 Professor Deborah Jewell-Sherman, Ed.M.’92, Ed.D.’95, has been named the Gregory R. Anrig Professor of Practice in Educational Leadership at the Harvard Graduate School of Education.

“From her transformative service as superintendent of Richmond Public Schools to her award-winning teaching and mentorship of students in our Ed.L.D. Program, Deborah is a powerful force for good in education,” said Dean James Ryan. “I can think of no one whose head, hands, and heart are more deserving of the honor of the Gregory R. Anrig Chair in Educational Leadership.”

The chair was held since its inception in 1999 by Professor Richard Elmore until his retirement in 2014. For Jewell-Sherman, the designation is “an honor beyond words,” as Elmore was one of her mentors during her time at HGSE as a student in the former Urban Superintendents Program, and also part of her dissertation committee.

“Through Richard Elmore’s Politics in Education course, I gained a deeper understanding of the political complexity of systemic change, how to think about addressing structural impediments to change, and how to be politically strategic, in addition to instructionally focused, to better achieve excellence through equity for all learners,” said Jewell-Sherman. “If I can impact my students' long-range trajectory and success the way Richard affected mine, I know that my work will have meaning long after I've left HGSE.”

Additionally, Jewell-Sherman feels a kinship to the chair’s namesake, Gregory R. Anrig, a former Massachusetts Education Commissioner during the court-mandated integration of Boston and other state public school districts, and described by Jewell-Sherman as an "equity warrior," who led with wisdom, compassion, and courage. “These are tenets of my commitment as an educational leader, and I believe this chair comes with the obligation to work even more knowledgeably, collaboratively, and courageously to impart to my students what HGSE has imparted to me – a quest to impact the world through education,” she said.

“DJS,” as her students often affectionately call her, has been a member of HGSE’s faculty since 2008 and, as the recipient of the Morningstar Family Teaching Award in 2015, was praised for her leadership, mentorship in and out of the classroom, and pedagogy. In bestowing the award, Ryan noted that students described Jewell-Sherman as “a north star for the Ed.L.D. Program” and “generous with [her] time, wisdom, and heart.

A former public school leader and educator with 32 years of experience, Jewell-Sherman became the first woman to hold the title of professor of practice at the Ed School. Prior to returning to her alma mater, Jewell-Sherman served as superintendent of Richmond Public Schools and was named Virginia Superintendent of the Year 2009 by the Virginia Association of School Superintendents. During her appointment, she set a high bar, and had a powerful track record: 95 percent of Richmond's lowest performing schools achieved full accreditation under Virginia's Standards of Learning reform legislation, and the district improved from 18 percent to 91.7 percent of all schools meeting this standard as measured by the State Department of Education.

“My most meaningful work is to teach, support, and learn with and from my students. They are part of my professional legacy and I'm incredibly proud of the knowledge, commitment, and passion they bring to their learning while at HGSE and to the preK–12 sector when they graduate,” said Jewell-Sherman. “They understand that to whom much is given, much is required and they are making — individually and collectively — a deep and enduring difference in the lives of students, teachers, administrators, and organizations through their educational leadership. As their teacher, I couldn't ask for more.” “Your Values Must Be Crystal Clear”

A system leader’s views on ending bullying and harassment.