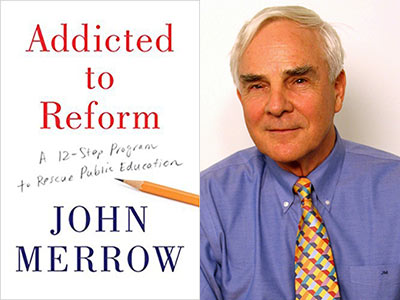 Throughout his long career as an education journalist for PBS Newshour and NPR, John Merrow, Ed.D.'73, spoke to many people in education — from policymakers to district leaders to classroom teachers — and he was impressed by the dedication most had to improving the field.

"The best people in the world work in education," says Merrow, author of numerous books on education including The Influence of Teachers: Reflections on Teaching and Leadership. "There’s no question about that.”

But there was a problem, in his estimation. Despite all the well-meaning people devoting their time and energy to making reforms, things were just not changing. When Merrow retired from journalism and began blogging, he was forced to take a close look at how he really felt about the state of education reform.

“I realized that we have been spinning our wheels by basically attacking the symptoms of a problem and not addressing the real problem," says Merrow. "We became addicted to this process.”

In this edition of the Harvard EdCast, Merrow discusses his new book, Addicted to Reform: A 12-Step Program to Rescue Public Education, and suggests ways in which education reformers can stop the cycle and head toward making real change.