A Movement Toward Integrated Schools

With two HGSE courses, Lecturer Lee Teitel and his RIDES initiative is leading a movement toward school integration. 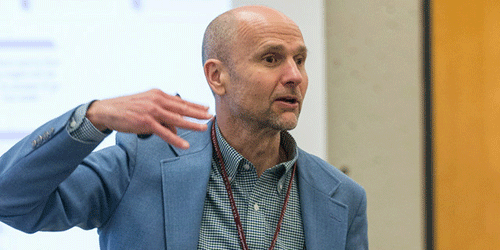 “Building high-quality diverse and equitable schools is something we can do,” Teitel insists. But getting America to a place where schools are truly integrated is a work-in-progress.

Since launching Reimagining Integration: The Diverse and Equitable Schools Project (RIDES), an initiative that investigates and identifies a common vision for growing equitable, diverse, and truly integrated schools, in 2015, Teitel has relied on students and educators working together to help capture what integration actually looks like in schools. Through two courses designed and taught by Teitel — Leading for Equity and Diversity in Integrated Schools and the newer Coaching for Equity and Diversity in Schools and Systems — HGSE students partner with K–12 schools and districts to tackle the intense and complex work of school integration.

“It is very real experience,” Teitel says. “It is not a lab experiment but real life and real schools facing tough issues.”

And, so far, dozens of students and partner schools have eagerly signed on.

Before Daisy Han, Ed.M.’17, even arrived at HGSE last fall, Teitel’s courses caught her attention. The former teacher and inner-city diversity trainer was no stranger to the complex work of integration. “The work is very, very messy,” Han says. She reached out over the summer to let Teitel know that she had to take one of the courses.

Each course, taught by Teitel with Darnisa Amante, Ed.L.D.’16, and Jennifer Kilson-Page, Ed.M.’99, covers the complex history of school integration and of politics and race in America. Teitel purposely included a fieldwork component which places teams of students in partnering schools or districts to experience what’s happening in the classroom today as a school consciously makes efforts to integrate across race, ethnicity, and social class. Where the courses diverge, though, is in the experience level of the students: Leading for Equity acts as almost a primer for students who have little to no experience with school or district improvement work, whereas Coaching for Equity is designed for students who, like Han, have experience and who can act as guides or coaches for schools beginning to navigate such work.

The partner sites play a huge role in the courses. Students dedicate several hours a week to observation, meetings, feedback, and recommendations and work closely with key members of the schools to help with a specific problem or goal. Though talking about race and integration can be emotional and sensitive at times, Teitel has had little trouble finding schools willing to partner. During the initial year, Teitel reached out to school leaders where he had already built relationships through his work, but as the courses and RIDES have flourished, he now receives requests from schools interested in participating. This year there were 12 schools and four districts that signed on to bringing teams of student interns inside their school walls, including  partner sites in both urban and suburban areas in Massachusetts, Illinois, and New York. In fact, there were many more districts interested than the course could accommodate, Teitel says.

For many of the school partners, it was an easy decision to participate. Manuel Fernandez, principal of Cambridge Street Upper School in Cambridge, Massachusetts, who has passionately focused on integration in schools for decades, jumped at the opportunity to participate in the course and RIDES, even if it meant taking a critical lens to the work behind done at his school.

“Bringing interns into the school keeps our work open and transparent,” Fernandez says, noting that social justice work can be isolating and draining. “You are always learning. It’s like you can’t keep going to an ATM and withdrawing because sooner or later, you got to make a deposit. RIDES is like the deposit.”

Like its partner schools, the courses have attracted a diverse group of students, like Ph.D. candidate Julia Jeffries, who enrolled in Leading for Equity, partly due to her own experience as a biracial student, but also her interest in the potential for schools to initiate and host experiences grounded in race. Despite the time commitment, she found the fieldwork component particularly compelling.

By coming together as a larger group throughout the year, like at a culminating conference in April, students and partner schools in both courses share what the journey looks like and what they’ve learned, and also discuss other topics of interest. The work is broad ranging from a school beginning this work through a campaign aimed at sharing stories of self to another school designing curriculum that fosters language around race to elementary-aged students to another school struggling with how to engage parents of color.

As the educators and students shared setbacks and progress, it was clear that despite how integration can look different, there was an underlying movement toward a common goal. In fact, part of the overarching goal of RIDES and the courses is to provide insight into the journey educators face to achieve equity, and how it can be done in a variety of ways. “There is not one right answer,” Teitel says. “But we are all trying to head in that general direction…. The goal is to learn from what is already being done. You don’t sit inside Harvard to figure it out.”

“Institutionalized racism is like standing on an escalator,” says Mary Anton-Oldenburg, principal of Bowman Elementary, a partnering school in Lexington, Massachusetts, “… unless you are walking against it, you are still not doing what you’ve got to do.”

Jeffries agrees, noting that the course really made her think a lot about how she’d like to participate in this work, and that ultimately, the work to address antiracism is a commitment of a school.

For Han, the course impacted her on a personal level. “It has given me a community,” she says. “This work can’t be done alone and having the class community is so valuable to be able to talk through the work.”

Learn more about the Reimagining Integration: The Diverse and Equitable Schools Project (RIDES).