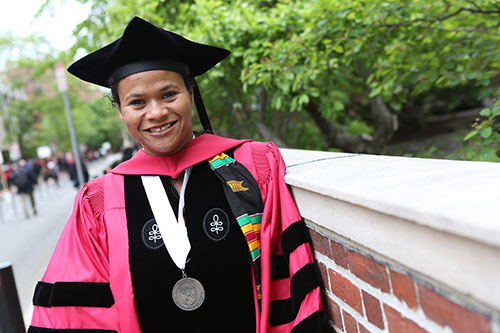 Janine de Novais wanted to be a professor for as long as she can remember. Now, armed with a doctorate from HGSE, she is ready to fulfill her dream.

When she immigrated from Cape Verde to Massachusetts as a teenager, she did well at Brockton High School, and headed on the path of college. After graduating from Columbia University with a bachelor’s degree in sociology, de Novais had her eye on graduate school, but she postponed indefinitely when she had her son.

“I thought I need a steady paycheck and benefits," she says. "I didn’t think single moms could afford to go to grad school.” So, she took a job working in higher education administration at her alma mater, quickly settling in at the university.

“I wasn’t living the dream but I was close to the dream,” she says.

She spent about a decade working at Columbia’s Center for Core Curriculum — the office that oversees the school’s undergraduate liberal arts program. Although she had taken courses on and off over the years, it was not enough and she longed for her dream. It was time to attend graduate school full time, she thought, so she applied to the Ed School.

The chances of attending Harvard after so many years away from her studies, though, seemed slim to de Novais. She told herself that she probably would not get in and she’d continue working at Columbia and happily retire there. “I figured, I’m not telling anyone that I applied to Harvard, because it’s such a long shot,” de Novais says.

Recalling the night Professor Julie Reuben called and left a voice mail asking her to call back, de Novais laughs at the thought that crossed her mind: “Now, I have to really show up!” But, showing up was never a problem for de Novais, who was elected marshal by the Ed.D. class and led the way at Commencement.

“It’s very humbling to have the opportunity to represent my colleagues and our institution,” she says.

When de Novais first came to HGSE, she planned to study how to transform a core curriculum like Columbia’s into its more culturally diverse, 21st-century iteration. In the end, de Novais ended up focusing more broadly and exploring the dynamics and possibilities of learning about race in academic spaces. The latter is the subject of her dissertation, where she looked at whether college classrooms can be optimal spaces for meaningful learning — and teaching — about race. Her study compared two academic courses at a liberal arts college: a seminar on slavery and a lecture on black political thought. She found that drawing from the academic grounding in the classroom, students became more intellectually brave, and displayed greater interpersonal empathy. She calls this process that links classroom dynamics to learning about race, “brave community.” The key to brave community, she says, is “academic grounding.”

"Academic content plays a huge role,” de Novais says, but how an educator sets up the class culture and models academic behavior is essential for meaningful learning about race to occur. More often than not, she says, students felt willing and eager to respond and reflect due to how their professor set the tone of the class.

De Novais admits that her dissertation has left her with more compelling questions, including questions about the implications of her work for K–12 classrooms and for professional settings. Knowing that talking — and, more critically, learning — about race is often fraught with challenges, de Novais hopes that her research can provide us with tools to productively face those challenges.

“We all know  that we need to be more empathetic and brave when it comes to race,” she says. “What I’m trying to bring are new ideas about how we do that. Folks need something to draw on, and that’s what academic grounding can be.”

De Novais feels very lucky: “I’m aware of the great privilege that it is to get a chance to make my living doing something that I love.” And she is thankful for HGSE: “I’m taking away from HGSE not only a great deal of intellectual training but also a lot of personal development,” she says. “I learned how to be a qualitative researcher, how to be a professor. But I also created lifelong relationships, I learned to believe in myself and I strengthened this lifelong love of higher learning.“