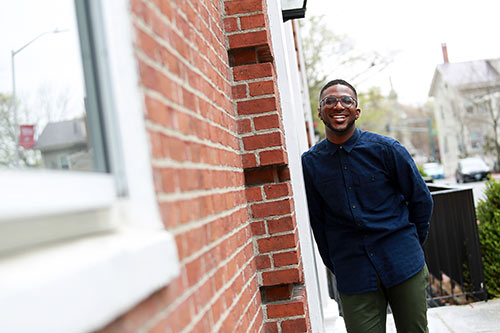 Pushing creative boundaries has always been a priority for Nnaemeka Ekwelum. So, he sought out the Arts in Education (AIE) Program for his graduate studies, in which he could not only develop his academic research and writing, but also explore how art can help build identity.

“I wanted to explore how artistic practices can be applied toward the identity development of Black and Brown youth,” he says. “Because anti-Black racism is so pervasive and so pernicious, I believe that art-making can empower marginalized people to trust that their hearts, minds, and hands can imagine and create new worlds of possibility.”

Facilitating conversations around art and identity became a vital aspect of Ekwelum’s time at HGSE. In the fall, he and two AIE classmates, Amy Johnson and Michelle Favin, began collaborating on what would become the three-part event series, Love in the Time of…, an on-campus exhibition that explored the many dimensions of love and what those dimensions look like in the socio-political context of our current times.

“While it has been a labor-intensive experience, it has been one of my main sources of inspiration throughout this year. And it has been beautiful to witness how our original idea has blossomed into the project that it is today,” says Ekwelum, noting that the collaborators did not get course credit for the project, so it truly was a labor of love.

“Emeka Ekwelum's contributions within the Arts in Education Program and across all of HGSE this year were characterized by his keen and uncompromising intellect, for sure, but it was the particular qualities of his intellect that were so striking to me — most notably his profound honesty, humility, and generosity, all of which encouraged me to animate those qualities in myself,” says Senior Lecturer Steve Seidel, faculty director of AIE. “Indeed, I think all of us in AIE and many more across HGSE were similarly influenced and inspired by Emeka's beautiful and passionate presence here this year.”

Ekwelum will receive the Intellectual Contribution Award for AIE at Convocation on May 24. Here, he reflects on his time at HGSE and his life in education.

What will you change in education and why? Through advanced study and practice, I hope to contribute to ongoing research that unearths and dismantles technologies of power that systemically impact the physical, emotional, mental, and intellectual development of Black and Brown youth.

What is something that you learned at HGSE that you will take with you throughout your career in education? (1) Making art is just a manipulation of materials.

(2) Passion projects are absolutely worth laboring over — invest in your ideas! #loveinthetimeof

(3) Nancy Sommers’ Writing Workshop reinforced the importance of revision, instilling in me that great writers are merely great revisionists, people who are willing to labor over an idea until it reflects the essence of what they hope to communicate to the larger world.

(4) One of the mottos of the Arts in Education Program is “expect to reflect,” and this philosophy has been integral to my entire academic experience at HGSE. I have always identified as a reflective person, but this year has shown me that reflection is what elevates an engaging learning experience to a transformative one.

Is there any professor or class that significantly shaped your experience at the Ed School? The Art and Science of Portraiture with Professor Sara Lawrence-Lightfoot has been one of the most instructive learning experiences of my academic career thus far. Not only was it an honor and privilege to be able to learn from Professor Lawrence-Lightfoot’s ever-insightful commentaries on life phenomena, but the members of our seminar formed a learning community that was both rigorous and familial. As someone who aspires to pursue a Ph.D., I have sometimes felt disempowered by the rigidity of social scientific research. Therefore, it was quite refreshing to experience how Professor Lawrence-Lightfoot has created space for herself and her research within “the academy.” As she once said to me, social scientific portraiture was the way that she learned how to do the work of a sociologist, and her commitment to asserting the artful rigor of this research methodology has forever changed my expectations of social scientific research.

Despite your busy schedule, you always make time for … feeding my creativity!

The number one, biggest surprise of the last year was … how accessible all of my professors have been throughout the year. In spite of their busy schedules, they have always made time to meet and connect with me when needed, and I have truly benefited from that kind of investment.

Read about the other recipients of this year's Intellectual Contribution Award.