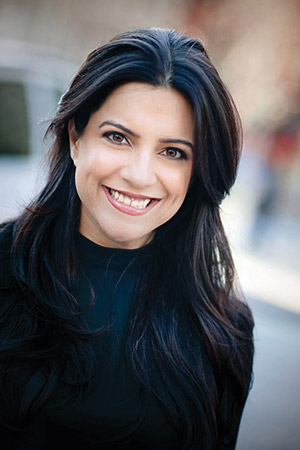 Dean James Ryan is pleased to announce that Reshma Saujani, CEO and founder of Girls Who Code, will address the graduating class and their families at Harvard Graduate School of Education’s Convocation on May 24, 2017.

Saujani launched Girls Who Code, a national nonprofit working to close the gender gap in technology, in 2012. Its efforts have now reached over 40,000 girls in all 50 states through 78 summer immersion programs and 1,500 afterschool clubs focused on teaching girls coding and exposing them to jobs in technology.

“Reshma Saujani recognized a persistent problem in the lack of women in computer science and technology fields, and, in building Girls Who Code, came up with an ingenious plan to address the issue through innovative educational programs and networks. Her organization, in just a few years’ time, has made promising strides toward closing the gender gap in technology,” said Ryan. “Saujani exemplifies the type of entrepreneurial and ambitious spirit that I know will inspire students and graduates at HGSE who hope to make their own impact on the world through education.”

A graduate of the University of Illinois, Harvard Kennedy School of Government, and Yale Law School, Saujani began her career as an activist and an attorney, serving as deputy public advocate for New York City. With her 2010 campaign in New York, she became the first Indian American woman to run for Congress.

“I feel a strong connection to the missions at HGSE — to prepare transformative leaders in education, to learn to change the world, and to explore the most important questions in the field,” said Saujani. “It is an honor to be asked to deliver the convocation address this year, and to share with the graduates my experiences in taking the next leap, pursuing an innovative idea, and in embracing failure along the path to something great. It has been amazing to see the impact that Girls Who Code has had on young women across our country. We’re going to need many more leaders who take initiative to solve problems if we’re going to strengthen our educational system and address its broader issues – leaders like those in the HGSE Class of 2017.”

Author of Women Who Don’t Wait In Line, Saujani has been honored by many publications and organizations — including by Fortune on both its World’s Greatest Leaders and 40 under 40 lists; WSJ Magazine, as an Innovator of the Year; and the New York Daily News, as one of the 50 Most Powerful Women in New York.

Note: Due to capacity constraints, the event is restricted to HGSE faculty, students, staff, alumni, and guests of our 2017 graduates. On Thursday, May 26, Dean Long addressed the graduates and diplomas and certificates were presented.