Master's candidate Valerie Piro is an advocate for reframing and reshaping the experience of people with disabilities.
By Bobby Dorigo Jones
April 13, 2017 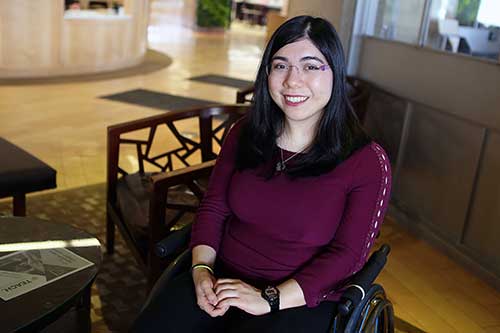 For a person whose passion is medieval history, a school of education might not seem a natural fit, but for Valerie Piro pursuing a master’s in higher education at HGSE — while seemingly unusual — makes perfect sense in her path toward a Ph.D. in medieval studies.

“One of the great things about being here at HGSE is that you get to study marginalized groups in a modern sense, but the methodology and theory behind it can be applied very broadly,” says Piro, whose research centers on studying disability in Europe’s early medieval period. “In a way, I’m creating the foundation for future research, even if the research is looking at 1000 years prior to now.”

As a budding medieval history scholar at Harvard College, Piro became a fierce advocate for reframing and reshaping the experience of people with disabilities.

“In high school, I visited a couple of really unaccommodating colleges,” says Piro, who suffered a spinal cord injury in high school that left her reliant on a wheel chair. “I wanted to make sure Harvard is a better environment.” In between late-night Latin translation marathons, Piro helped organize Harvard’s first ever Disability Pride Week, a series of conversations and events aimed at dismantling ableism.

“Val is a real advocate, but basically she is an educator,” says Eileen Berger, assistant director of HGSE’s Office of Accessibility and Disability Services where Piro works as an intern, assisting peers with tasks like schedule planning and notetaking. “I am impressed with how disciplined she is, how focused she is, how she works to teach others about these topics and make our school a more inclusive place.”

A year ago, Piro began writing extensively about her life, hoping to show readers to better understand the reality of living with a disability. Her insightful, focused prose has been published in the Harvard Law Record, the New York Times, and Inside Higher Ed. She also told her story at the Ed School during last semester’s DoubleTake event.

Working toward her future career — she was accepted into Princeton's Ph.D. program — Piro has adopted theory from Senior Lecturer James Antony’s course Diversity and Equity in American Higher Education that she hopes will inform her future research. But, in the meantime, she will continue to advocate for all students with disabilities, on college campuses and beyond.

“Whenever we bring up subjects like diversity and equity, disability is barely mentioned at all,” she says. “I’m hoping I can contribute at some point to it becoming a bigger part of the diversity conversation.”