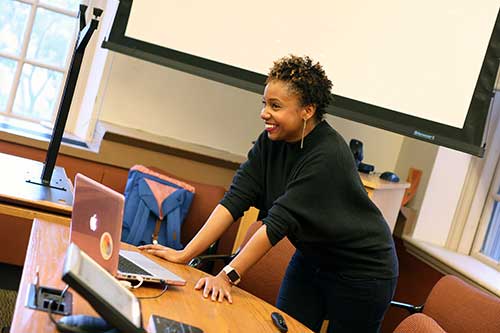 As Commencement approaches, we look back the impact our students made over the course of their year at the Ed School.

On a cold February afternoon, the view into a Longfellow Hall classroom might raise some eyebrows. There, a group of HGSE students — members of this year’s Urban Scholars Fellowship program — stand staring into each other’s eyes, mimicking each other’s movements without speaking, though the occasional giggle does erupt.

Over the course of an hour, the students dance, listen to music, share life’s disappointments, and perform monologues. More than an effort to break the ice among colleagues who don’t know each other well, these series of theatrical exercises are also lessons on building empathy.

“Theater has this ability I've been fascinated by since I was a child,” says Ed.M.  candidate Alysha English, the Urban Scholar fellow leading the workshop. “It has this innate ability to bring people from wildly diverse backgrounds together into a shared space [to] ‘play’ together. There is power in playing, creating, making, and sharing together.”

English, who before enrolling in the Arts in Education (AIE) Program worked as a theater teacher and in nonprofit arts organizations, theorized that exercises utilized in the theater — often constructed around listening, connecting, and sharing — could transcend the stage and be used by people from different backgrounds to interact in powerful ways.

Though she had been teaching theater exercises for many years, it was Associate Professor Karen Brennan’s course, Designing for Learning by Creating, that pushed English to finally design the workshop for her peers. English says that the current political climate in America, where there seems to be growing divide and dissention fueled by the recent presidential election, further propelled her to focus on the importance of empathy.

“These particular exercises force us to actually see each other, exchange stories, and step into the shoes of another person,” says English. “I chose exercises that I thought built a foundation of connection and then expanded into a realm of sharing experiences. From there, I hoped that these exercises would force people to not only consider, but internalize the perspectives of other individuals.”

In one of the workshop’s exercises English asks participants to partner off and share experiences of disappointment. Later, participants perform monologues of their partners’ experiences for the group. “I love this for many reasons, mostly because it challenges the audience to not just be spectators but become active participants in the theater making process,” she says, noting that it doesn’t take long — less than an hour — before the group begins to connect at a deeper level.

Urban Scholar Fellow Dara Carroll, a master’s candidate in the International Education Policy Program, says she appreciated the workshop exactly for the reasons English describes. “We'd met as a group several times before that, but I think that more connection happened in that one hour than in all of our others interactions combined,” she says. “I felt much closer to the rest of the group after that day.”

English hopes the Urban Scholar fellows, as well as any other educators who take the workshop in the future, will pass on what they learn to others. She is currently collaborating with fellow AIE master’s candidate Mia Branco and Making Caring Common on InterAct, an expansion of her workshops. The group, recently named one of 10 finalists Dean’s Challenge at HGSE, are working toward developing either a toolkit or curriculum for teachers that will incorporate theater exercises that build community and empathy in schools.

“Our goal is to make these exercises that might feel intimidating to teachers feel very accessible and easy to implement or integrate into their classes,” English says. “I think learning environments should be fun and promote human connection. It sounds so fundamental, but sometimes we forget that.”

English and Branco will present their work, along with the nine other Dean’s Challenge finalists, on April 13.