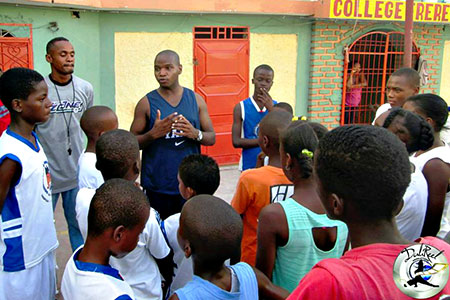 Growing up in Martissant, a tough neighborhood in Haiti’s capital Port-au-Prince, Fils-Aimé discovered the sport as a young boy when his mom brought home a hoop. His love for the game would lead to a job with the men’s team as an undergraduate at Yale and, eventually, to the creation of Basketball to Uplift the Youth (BUY) of Haiti, a communtiy youth program with the mission “to use basketball as a platform to impart life skills to the youth and provide them with talent-building opportunities.” Fils-Aimé created BUY just three years ago in an effort to help and give back to the students of Martissant.

“Being there every day, leaving for work early in the morning and seeing that there isn’t much available to the people in that neighborhood, really made me want to do something to contribute,” says Fils-Aimé, who returned to Haiti after spending part of his adolescence in Miami and attending college at Yale.

The spirit of BUY’s work is rooted in the service of teachers from his youth — ESL teacher Ms. Pierre-Canel and middle school teacher Ms. Gonzales, both of whom helped Fils-Aimé adapt and, then, excel when his family moved to Miami. Like those educators, Fils-Aimé wants to be a mentor to students who may need some extra support.

At BUY, students from different Port-au-Prince schools file in three times a week at 3 p.m. where they are met by an inspirational quote scribbled on the blackboard in multiple languages. They are asked to reflect on the words before the activities start. Sometimes they go on a field trip to museums and parks. Then comes the basketball, taught by Fils-Aimé and other coaches. Through teaching the fundamentals of the game, Fils-Aimé and his team hope to encourage teamwork, responsibility, a healthy lifestyle, leadership, personal support, and self-esteem.

“Our objective through everything we do is to expand their horizons, to expose them to things that they normally wouldn’t be exposed to,” Fils-Aimé says. “The way the education system in Haiti is, especially early on, it’s really centered on Haiti and rote learning, so it’s a way for us to expand their knowledge too.” 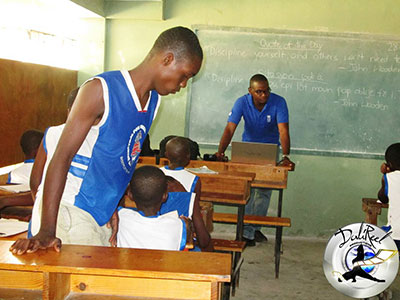 The first year of BUY was difficult; Fils-Aimé paid for nearly everything himself, from equipment and supplies for his 30 students to the paint for the basketball court. Two years in, Fils-Aimé was looking for opportunities to strengthen his work at BUY. Spurred by his interest in human development and psychology, he became interested in HGSE after being introduced to the school by another Haitian HGSE alumni, Nedgine Paul, Ed.M.’12.

“I wanted to know more about how as humans we learn and develop from being children to becoming adults and using that knowledge to better the work that I’m doing with the kids,” says Fils-Aimé, who enrolled in the Human Development and Psychology Program, all the while still running BUY.

The Ed School courses he chose gave him a greater understanding of how young minds grow, giving him new direction for BUY. “Through those courses I was able to develop a theory of change for BUY,” says Fils-Aimé, noting that classes with Assistant Professor Dana McCoy and Professor Paul Harris were particularly resonant.

Fils-Aimé believes that his time at the Ed School is beginning to pay off for his organization. In its third year, BUY has worked with more than 100 students, and 60 more are enrolled currently, twice as high as when he started. Fils-Aimé has launched a scholarship fund for students with at least an 8.0 grade point average (Haiti’s scale is 1–10). And now, in the wake of Hurricane Matthew, Fils-Aimé — recently named a Political & Economic Affairs Consultant at the Embassy of Haiti — is considering BUY’s next move. The main goal is scaling up — finding the right people and the right resources to grow his program so more youth across Martissant can enjoy the benefits of caring mentors and peers, while learning and playing a great game.

“I always felt so privileged to have had the opportunities I had,” says Fils-Aimé. “Being from one of the poorer neighborhoods of Port-au-Prince, I felt that it was my duty to give back and to reach out to kids in Haiti and tell them, ‘Hey, if you have a dream, you work hard towards it, you have supportive people around you, you’re gonna do it.’”

Photos by DaliReel Productions: Fils-Aimé works with his students on the basketball court (top) and in the classroom (bottom).