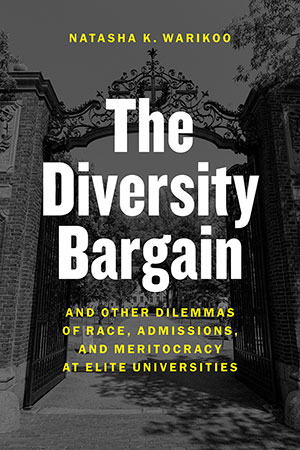 Ensuring a diverse student body is of the highest priority for admissions offices at colleges and universities. In fact, the promise of a diverse campus — and the differing perspectives found on one — is often part of what attracts top students to the schools they choose to attend. But, how do they feel about diversity and affirmative action once they actually get to campus?

For her new book, The Diversity Bargain and Other Dilemmas of Race, Admissions, and Meritocracy at Elite Universities, Associate Professor Natasha Warikoo interviewed students at Brown, Harvard, and Oxford. What she found was a disconnect between students' ideas of what a diverse campus would be and the reality. Often, says Warikoo, white students who were in favor of affirmative action during the admissions process were so because they saw a diverse campus as a benefit to their own growth and learning; they didn't consider what the experience would be for those of different backgrounds.

"The problem is that when that is the only way students make sense of affirmative action and diversity," says Warikoo, "it leads to some perverse outcomes," including the perception of reverse racial discrimination and anxiety about how others are affecting their success.

In this edition of the Harvard EdCast, Warikoo discusses the study that led to her new book, and reflects on the notions of race, merit, and privilege at elite universities.