Each of the 12 quilts on display at the Gutman Library this month tackle an issue of our time. Whether the quilt focuses on immigration, gentrification, slut-shaming, or police brutality, its creation is more than just sewing, says Prevention Science and Practice master’s candidate Sara Trail. Each is an exploration of a young person’s identity and empowerment as guided by Trail’s Social Justice Sewing Academy (SJSA), an endeavor that allows students to find their voices about issues that matter most to them through sewing.

The idea for the SJSA came to Trail following a visit last year to HGSE’s Alumni of Color Conference (AOCC), the theme of which explored social justice work with young people. Trail, who has been sewing as long as she can remember, left inspired to use sewing in this capacity. A senior at University of California–Berkeley at the time of her AOCC visit, Trail applied for the Judith Lee Stronach Baccalaureate Prize at Berkeley, which "supports intellectual and creative pursuits that heighten awareness of issues of social consciousness and contribute to the public good." The prize provided funding and time this summer for Trail to focus on SJSA.

Trail developed a curriculum that focuses on reading, research, poetry, design, and drawing. “It is really activist art-making,” she says, noting how art can impact social justice facing people and their communities. “I’m enabling kids to create. It’s not just about me. I can teach anyone to sew but I want to empower kids.” 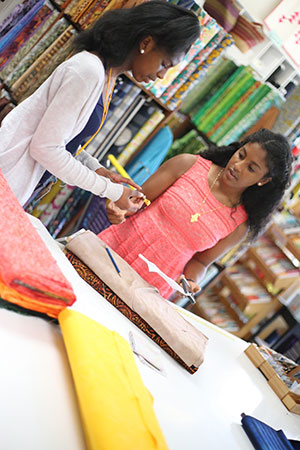 This summer alone, Trail’s Social Justice Academy brought the art of sewing quilts to hundreds of young people throughout the San Francisco Bay area and Chicago. “There is a lot of hesitancy at first,” Trail says, noting that sewing might not be considered cool by today’s kids who are armed with iPads and cell phones.

“Students would say, ‘Sewing is whack,’” Trail says. But upon seeing all the different things one can sew, and as they continued working through the social justice curriculum Trail developed, students would become enraptured with the project, ultimately producing beautiful work, including the quilts on display at Gutman.

Trail’s passion for sewing came early. At just four-years-old, she learned to sew from her grandmother. From that point on, her talent grew and by 13, she landed a successful book deal for the popular Sew with Sara, and later a line of sewing patterns and fabrics.

While traveling the country and offering sewing classes to young people, she took note that her students were predominantly white. This inspired her to create free sewing classes for children of color at her local church. “Often kids of color don't have access or the capital to afford the classes, [or] the sewing machine, tools, fabrics, necessary to attend the classes,” she says. “So in creating the sewing program at church, it being free was really key.”

Though sewing has remained a passion of Trail, she came to the Ed School this fall interested in learning more about intervention and community psychology. Eventually, she hopes to focus on incarcerated youth and alternative schooling, but in the meantime, Trail plans to keep sewing and teaching social justice art.

The next stop for the Social Justice Sewing Academy is the Community Charter School of Cambridge, where Trail will work with principal Ali Nomani, Ed.M.’15, and high school students during the spring semester creating activist art.

“Teaching to make pajamas is one thing but to see a kid excited about activism, social justice, and art is another thing entirely,” she says.

The Social Justice Sewing Academy quilt exhibition is on view at the Gutman Library until October 29.