The Impact of Executive Ed 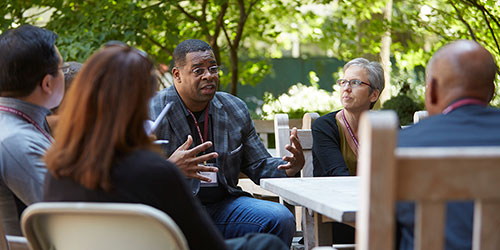 While HGSE master’s and doctoral students were busy wrapping up final projects and making plans for commencement this past May, many in the HGSE faculty were preparing for a whole new set of students to take over the classrooms of Appian Way through their engagement with Professional Education at HGSE.

“Our summer executive education programs represent some of the highest impact work done by HGSE faculty in both K–12 and higher education,” says Senior Lecturer James Honan, educational co-chair for the Institute for Educational Management. “During the summer months we work with hundreds of educational leaders from a wide range of institutions in the United States and abroad.”

While dozens of programs are offered over the summer, led by faculty in a range of subject areas, other offerings are delivered both on campus and online throughout the year.

“As our summer programs come to a close in August, HGSE faculty are readying not only their upcoming fall degree program courses but an additional set of executive education programs that run throughout the academic year,” says Honan. “There are so many storylines.”

Among the thousands of participants who engaged in professional education at HGSE this past summer, new college presidents worked together to prepare for their roles as leaders of higher education institutions; scores of academic librarians met to discuss the challenges facing their ever-changing field; and over 100 early career principals developed leadership skills to better support teacher development and student achievement.

What follows is a closer look at three programs and the faculty chairs who lead them.

Senior Lecturer Judith McLaughlin chairs the Harvard Seminar for New Presidents, which began in 1990. McLaughlin, who had been researching higher education leadership transition at the time, recognized that each time she interviewed college presidents, especially those new to the role, they were all desperate to talk.

“Presidents are the only ones in that position,” says McLaughlin. “When you become a dean, there are other deans. But when you become president, you are in this odd position where you are the intermediary — the translator — for multiple groups, from the board to vice presidents to faculty, and it’s a very unusual role.”

McLaughlin and a group of HGSE faculty realized this was a missing component of professional education being offered. Now, the Harvard Seminar for New Presidents has become a well-established and internationally-recognized program that enables new presidents a chance to meet with colleagues who share similar challenges in their professional careers.

This summer, HGSE hosted 58 new college and university presidents, representing institutions of all types throughout the country, from public and private to community colleges and art institutes. Among this record number of participants were international presidents, including two presidents from the American Universities in Afghanistan and Cairo.

While all the presidents were new to the job, each brought unique challenges from their institutions, and varied paths to how they attained their leadership positions. But regardless of background, the time for self-reflection was an invaluable one for all seminar participants.

“Business as usual comes into the office all the time, some days are routine, and others days are more akin to a crisis, and no institution can afford to slow down,” says McLaughlin. “What we are giving them is an opportunity to step out of their institution and be with people who share their same role and think about different dimensions of their jobs.”

One of the major challenges facing new presidents this summer was the state of activism on their campuses after a turbulent spring, and expectations of what would greet them in the fall. The presidents had many questions dealing with these issues, according to McLaughlin.

“How do they navigate competing political and moral agendas? How do they think about the role of the president as chief communicator? What about the tug of war over priorities, competing moralities?” McLaughlin says. “They looked at what had been happening, and wanted to think about their particular positions in regards to this.”

While the new presidents spent an intense week grappling with issues facing institutions of higher education, the network of support they built at HGSE over that time continues long after they leave campus.

“The President of the American University of Afghanistan had barely arrived back on [his] campus when two faculty members were kidnapped and a major terrorist attack [occurred],” McLaughlin says. “The concern and reach out for him was incredible. I know how much it helped him during this crisis to reach out and talk to cohort members.”

And that support, for issues big and small, is one of the lasting impacts of the program. “They have developed a camaraderie that lasts during their presidencies and beyond, which is quite remarkable for people who arrived as strangers,” says McLaughlin.

Over 80 librarian leaders gathered at HGSE in late July to attend the Leadership Institute for Academic Librarians. Participants gathered to discuss the challenges and changes occurring in their field. Arriving from 35 different states and 10 foreign countries, they represented an array of higher education institutions, from large research universities to small liberal arts colleges.

The program is a mix of formal sessions led by faculty and smaller discussion groups that occur daily where library leaders can dive into issues they are facing at their home institutions, while learning from the unique perspectives of other librarian leaders with similar challenges.

“There are two overarching objectives for the institute,” says Lecturer Joe Zolner, senior director of higher education programs for Professional Education, and chair of the library program. “One is to think more broadly about leadership beyond the confines of the library; how the functioning of the library fits into the larger institution. The second goal is for these leaders to do a self-inventory of their own leadership strengths and weaknesses, to figure out what is working and where they might be leaving leadership potential on the table.”

One of the biggest challenges facing academic libraries and their leaders is the rapid digitization of information services. With the ubiquitous and easy access of information anywhere, anytime, it raises fundamental questions about the goals and purposes of the library and library leadership.

“In an earlier era, the library was a place you visited to take out books or study, but that ‘place’ is everywhere now,” says Zolner. “A library is no longer just a physical place, but a place to go virtually and intellectually.”

For library leaders, this paradigm shift has transformed their work into  more of an instructional assistant, Zolner says, which, in turn, requires closer collaboration with faculty to better connect learning objectives with informational resources.

“The new digital environment is redefining the role of the library,” Zolner says. “How do librarians get outside of the library? Library leaders need to be at the larger institutional table discussing changes and the goings-on of the higher education institution. The current picture requires different leadership skills than those provided in traditional graduate programs in library science.”

While thinking about their evolving role as library leaders, participants also have the chance to assess the strengths and weaknesses of their own leadership, and many come away from the institute surprised by how much they learn about themselves.

“A portion of what institute participants gain is more individual and personal in nature,” says Zolner. “When arriving at Harvard, many participants don’t expect to come away assessing how they think about authority, or their openness to delegating responsibility, or new ways  they may need to adjust their personal leadership.”

The Leadership Institute, which is run in partnership with the Association for College and Research Libraries (ACRL), part of the American Library Association, completed its 17th offering in summer 2016. When the program launched in 1999, the thinking was that the institute might run for a few years before exhausting the audience of library leaders. But the demand is showing no signs of slowing down.

“People in the library field are saying this institute is one of the premier professional development opportunities for college and university library leaders to hone their skills,” Zolner says. “It’s running much longer than any of the original architects of this program envisioned.”

Improving Schools: The Art of Leadership

In this era of high accountability, the role of a school principal has become even more complex.

“With No Child Left Behind and the Every Student Succeeds Act, the buck really does stop at the principal’s office,” says Senior Lecturer Pamela Mason, director of the Language and Literacy master’s program and chair of Improving Schools: The Art of Leadership.

Principals this summer focused on what Mason calls the three main legs of the curriculum: school improvement, school culture, and student outcomes. But that’s only half of the program. For all the leaders, they need to be able to balance their own expectations and experiences with those of students, parents, and faculty, and those skills can’t just be boiled down to a few boxes to check off.

These were the some of the topics over 150 K–12 leaders from across the United States and the world came to tackle this summer at HGSE. Principals from 22 states, the District of Columbia, and countries including Australia, India, and China, representing public, private, and religious schools, gathered together to discuss what it means to be a leader. But before they could settle into their new Harvard classroom, they were in for a surprise.

“One of the hallmarks of the program is that we have them engage in experiential learning, and one of the biggest surprises is, we’re going to camp? We’re going to climb trees?” Mason says, referring the program’s participation in Project Adventure, a nonprofit in Beverly, Massachusetts, which leads outdoor activities to build leadership and teamwork.

When the group returns to HGSE, the faculty uses those examples of small-group problem solving in the context of dealing with education issues when the principals return to their home schools.

“Giving them practical problems, and seeing whose voice is listened to, whose suggestions are ignored, they are having the experience of not necessarily being the leader, and they can think about how they would handle leadership styles with their own faculty,” Mason says.

While many of the principals arrive at HGSE having just finished up busy school years, some having only closed their doors a few days before, everyone is enthusiastic to be there, says Mason, and their enthusiasm continues once the program ends. Most of the small groups that develop during the week stay in contact, proving each other peer support and a professional network that extends their experience for many years after the program ends.

“It’s the art of school leadership, because there is no manual, no 10 steps that anyone can do to succeed,” Mason says. “It is an art. You have to be able to push and pull. There are times when you need to speak and times when you need to listen. We try to help leaders think of the nuances in their role as leaders and as role models.”