The Arts and Social Integration 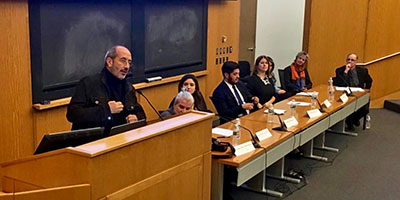 How can the arts best be used to create educational programs and multidisciplinary partnerships? That was the focus of the symposium held earlier this month as part of the Social Integration Through the Arts (SITA) initiative, a collaboration between HGSE’s Arts in Education (AIE) Program and the David Rockefeller Center for Latin American Studies. The two-day event, entitled “Snapshots of Practice,” brought cultural leaders from Argentina, Brazil, Chile, Colombia, and Mexico, together with faculty and students at Harvard to discuss strategies.

“The goal [of the initiative] is to create a space of dialogue and exchange, both across Latin America, but also with Harvard faculty and students, and with Boston-based arts educators with a social change commitment,” says Senior Lecturer Steve Seidel, director of AIE, who with Senior Lecturer James Honan has led three symposiums for SITA.

Programming included looking at the role of the artist in the community, financial sustainability in nonprofit organizations, and promoting community engagement, all part of a broad encapsulation of “social integration,” which holds varying meaning in Latin America and in the United States.

“[The term] captures a range of activities that we might call ‘social change’ or ‘social justice’ here,” Seidel says. “It includes, for example, youth development programs that might have a vocational dimension, education programs, community development work.  It captures a whole range of work that creates venues and opportunities for people from every community and social class to engage with [art]” beyond just museums and concert halls.

The symposium featured a number of leaders from the arts, including AIE alum Enrique Márquez, Ed.M.’11, the founding executive and artistic director of Orquesta Filarmónica de Boca del Río, a youth orchestra in Mexico. The event culminated in a master class with Alvaro Restrepo, cofounder of El Colegio del Cuerpo (The School of the Body) and one of Colombia’s contemporary dance pioneers whose work has dealt with honoring and healing from the pain of his country’s 50-year civil war.

“There were about 40 people on the floor,” Seidel says. “Alvaro did an introduction of his work, and then began the class just as he would do with 8–12 year-olds in Colombia. He introduced our students to the exercises he does with young people, and it was spectacular.”

While the day offered a chance to share and document the important work being done in and through the arts, it also helped to foster dialogue between practitioners who had not before been in conversation with each other, creating new partnerships in Latin America.

“[One of the] things we hope to do is to mix of established leaders, like Alvaro, and younger folks, like Enrique, who are in their first decade of active work in this realm,” Seidel says. “It’s an opportunity for learning and teaching from each other, but also for mentoring.”

Since the first symposium at Harvard in May 2015, the design for the initiative has been to have two meetings a year, one in Cambridge and one in a different country in Latin America. Seidel and Honan led a public talk in Cartagena, Colombia, last January and are looking toward a fourth meeting in January 2017 in Chile.

“As we look forward to the next phase, there have been the beginnings of dialogue amongst the participants around engaging more deeply with each other, and even some co-productions,” Seidel says. “Alvaro has proposed the possibility of actual performance and educational collaborations and exchanges in different sites across Latin America, in addition to the next phases of dialogue as part of SITA’s work. I think that’s a terrific idea.”

Photo: Alvaro Restrepo speaks at the SITA symposium in October. Every Child Has a Voice Despite COVID, two alums knew the play was the thing.