Up Next: The Good Athlete Project 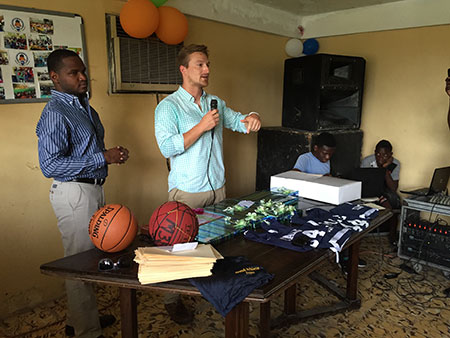 Jim Davis, Ed.M.’16, will tell you that athletics can be a lot more than fun and games.

Through his nonprofit, the Good Athlete Project, Davis is shining a light on how athletics, particularly coaches, can have a positive impact on students by helping to develop character and social emotional learning. But these opportunities for students can only be realized if coaches recognize the pivotal role they can have on the psychology of their players and first create those opportunities.

“We believe that coaches have the potential to be some of the most powerful models in a student's life,” Davis says. “In some cases, coaches don’t realize the impact they can have in other ways [on students]. If you are a basketball coach, you better be way more than that. If it ends simply at how to run a certain offense then you missed a real opportunity.”

Davis’ Good Athlete Project is helping coaches and sports nonprofits around the world recognize those opportunities by consulting with them to enhance their methods, streamline business models, and aid in building for the future.

While at HGSE this past year, Davis began identifying the project’s framework, though you could argue he has been slowly brainstorming the nonprofit throughout his life. During his profession football career, Davis — who played for two arena teams and an international league — found himself coaching in the off-season. While coaching football at New Trier High School, located just north of Chicago, Davis was asked to build an athletic program for strength and conditioning on campus. What started as a simple program soon grew from 80 to more than 1,000 students, and he began to recognize the power athletics could have on shaping students’ character. The seeds of the Good Athlete Project were planted.

“Our program was growing quickly, and the kids we were working with were wild about what we were doing. We ran out of space in our gym. I immediately realized that with this amount of buy-in, we had to offer more than just workouts,” Davis says. And the impact that the program had on its students was clear.

“We recently had a girl in our program with a significant eating disorder. We were able to provide a safe atmosphere to talk about nutrition — the way an athlete should eat to perform at her best — and for the first time in a long time, she was able to reframe her relationship to food,” Davis shares. “That same year we had a male athlete who couldn’t control his emotions and was getting in a lot of trouble for it. He’d been pigeon-holed as a bad kid, messed up too many times, and was on the brink of being expelled. We were able to create ‘wins’ for this student in the weight room, cultivate his work ethic and dedication to his teammates, and provide an atmosphere where he could be disciplined without feeling like he was being called out by another teacher who didn’t understand him — this all lead to the embodiment of a more positive sense of self-worth, resulting in improved behavior and academic performance. That student went from nearly being expelled, to being enrolled in a top college. Athletics provide a unique third space for this sort of education.”

It wasn’t until Davis arrived at HGSE this past year that he began to further identify how athletics can become a powerful framework for students with the guidance of Senior Lecturer Richard Weissbourd under the Human Development and Psychology Program.

“It’s not sports, per se, that builds character in children. Poor coaches can create cultures that lead children and youth to be more selfish, to demonize their opponents or to scapegoat a referee. Good coaches, on the other hand, can create cultures that enable children, among other benefits, to tune in to others and to sacrifice for a common goal, to learn about fairness and to appreciate their opponents,” Weissbourd says. “With around 40 million children playing organized sports, these potential benefits are no small matter. Jim is creating a program designed to do the deep work of enabling a wide range of coaches to create positive cultures that build these vital aspects of character. Because of Jim’s own athletic experience, his sensitivity to the needs of young people, his wide-ranging intelligence and creativity and his fine ethical sensibilities and commitments, he’s the right person for this job.”

In fact, Davis was recently invited to Haiti by Dave Fils-Aimé, Ed.M.’16, who serves as executive director of the nonprofit, Basketball to Uplift the Youth of Haiti. During the visit, Davis met with coaches and administrators of the nonprofit and shared with them his insights on coaching methods. The two organizations also identified the terms and nature of their newly forged partnership, and developed short-term and long-term goals of the partnership, as well as strategies to achieve those goals. In the coming year, Davis plans to bring the Good Athlete Project to schools and nonprofits in San Diego, Ireland, Brazil, and Chicago where he and his staff will offer professional development, goal-setting and strategizing, and team-building opportunities for coaches.

Because athletics can be universal, Davis sees no reason to limit the scope of the project just to the United States. “Basketball is the same in Chicago and in China,” he says. “A touchdown is a touchdown whether we’re in Singapore or San Diego.