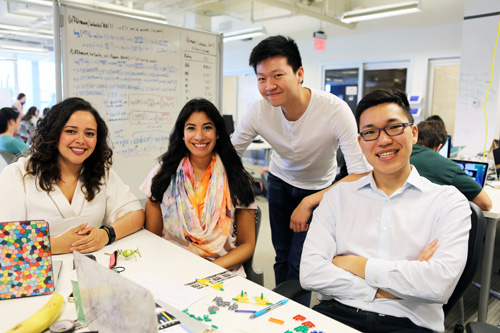 Subscription services are the newest wave hitting online retail, with customers able to sign up to receive monthly curated boxes that cater to tastes ranging from fashion to culinary. A new enterprise from a team of Harvard Graduate School of Education alumni will add its own box to the industry with a subscription service designed for parents and children.

CubbyCase, co-founded by Special Studies graduates Kelvin Woon and Fred Ge, both Ed.M.’16, will send subscribers an assortment of education products and activities from partner companies, along with specially designed curriculum to help parents better engage with their children. While the box is loaded with toys and books designed for kids aged 5–9, CubbyCase will also appeal to parents.

“We’ve intentionally positioned ourselves as much to the parents as the kids,” Woon says. “We are trying to speak to the parents who are busy and want to get more involved. The boxes are almost instructions for the parents on how to engage more with their children.”

The first case features products from award-winning companies, including building sets from K’NEX, a book from Arbordale Publishing, and an electronics kit from Chibitronics, a group out of MIT. While there are other companies offering subscription boxes geared for students, the team believes that what sets CubbyCase apart is the carefully developed curriculum that will engage parents as well as children.

“We at CubbyCase believe the best education tools and products are already out there on the market,” Ge says. “The problem parents face is not a lack of great products, it is knowing which products to pick. We believe by curating existing education products and overlaying them with an easily accessible curriculum, we solve these problems in a way our competitors cannot.”

The idea for CubbyCase came to Woon while studying at HGSE. He realized through his varied entrepreneurship courses that he could start a brand new enterprise, but why not try a different approach?

“As I was involved with classes there would be a new case and new entrepreneur coming each week,” Woon says. “I was exposed to such a lush variety of education entrepreneurship I realized I could create something on my own or I could borrow the strengths of other projects, to be a bridge.”

Woon decided to leverage the years of research that had gone into designing great products, and package them into one convenient kit for parents and kids. In order to find partners, Woon was inspired by the story of Birchbox, a cosmetic subscription company started by students from Harvard Business School. The Birchbox team shared how at their start they had cold called CEOs in their industry to find partners. Woon realized he could do the same.

“That’s how we established the entire box,” Woon says. “We found the contacts of all the book companies, the toy companies, the education companies, and asked for some time to talk with them to see how toys have changed, how parents have reacted, how they think about marketing and designing, and eventually asked if they wanted to be part of the first box.”

With an idea and partners in place, Woon wanted to build a team. “The one thing you learn in entrepreneurship is that solo entrepreneurs don’t really have a good time,” Woon says. Woon turned to Ge. The two had built a friendship during car rides together as Ge drove Woon to church during the school year.

“I started looking at people I developed relationships with at HGSE,” Woon says. “It’s more about the values than the skills that a partner brings, because even if you disagree, you know in the end you’re probably on the same page.”

But Woon, who had a background in economics, and Ge, who had been a finance analyst, realized they would need additional team members with deeper backgrounds in classroom teaching and family engagement.

Putting out a call through the HGSE admitted students page on Facebook, Francesca Barreiro and Andrea Zuniga, both Ed.M.’16, joined the team as curriculum designers. Barreiro, a member of the Mind, Brain, and Education cohort, had a teaching background in preschool and early elementary, while Zuniga, a member of the Education Policy and Management cohort, brought several years of working in organizations building bridges between parents and their children's educational experiences.

“The curriculum is meant to give adults some guidance on how to make the most out of the time their child spends playing with the toys,” Barreiro says. “We hope this relieves any pressure parents may feel to figure out on their own all the educational opportunities that can be nurtured during play time, and instead use that energy to enjoy their interactions with their child.”

Zuniga explains that in her previous work, she recognized the number of families who felt left out of their child’s educational experience. She believes that CubbyCase is built on the foundation of promoting whole-family learning.

“I was drawn to [Kelvin and Fred’s] enthusiasm for sharing products with families that would not only enhance the educational value of playing via a fun and engaging curriculum,” says Zuniga. “They had a strong emphasis on family bonding and creating meaningful experiences between kids and the grown-ups in their lives.”

Woon and his team have spent the summer building CubbyCase out of the Harvard i-lab. They officially launched on August 12, with an initial offering of 300 boxes. The team hopes to sell all those kits as a proof of concept, then put a second box together for October with the goal of hitting 1,000 subscribers.

Based on early reactions, the team is optimistic. Throughout the summer the team has hosted focus groups and embarked on “Field Fridays,” heading out to Harvard Square every week to talk with parents and kids about CubbyCase.

“The kids are genuinely engaged and the parents have been pretty receptive,” Woon says. “A lot of the parents said it comes down to the curriculum side. If it’s just a box sending more toys, they have toys at home. They don’t need more. But if it’s teaching parents how to engage more, it’s different. And that’s why we’ve focused on the parenting and teaching side.”