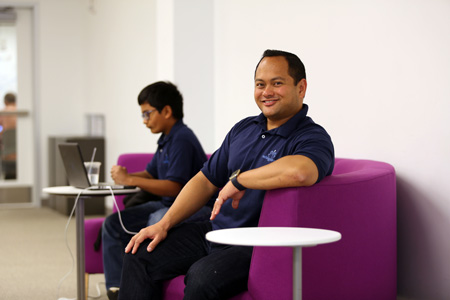 When Conrad Macalalad, Ed.M.’16, arrived on Appian Way as a member of the Technology, Innovation, and Education cohort, he was already well aware of the fact that this generation of students is the wired generation; he saw it in his own four children, who he says were acquainted with an iPad before they started using a paper notepad. Yet Macalalad says he saw a real lack of innovation happening around computer science education, at his own children’s school and beyond.

“I came into HGSE really concerned about the state of education, how outdated it is,” Macalalad says. “Computers are part of our daily lives and are powerful mediums able to create solutions to pressing social and global problems our kids will inherit, yet so few schools offer high quality computer coding.”

Macalalad began thinking that if computer education was lacking at the well-funded Orange County, California, public school his children attended, what about students in communities who weren’t so fortunate? Macalalad decided to focus on getting students better access to computer science education through a venture called CodingConnect.

Founded alongside Michelle Millar, HBS ’16, and Hla Hla Win, HKS ’16, who Macalalad met through Social Innovation Lab, a course at the Harvard Business School, CodingConnect is a social impact educational consulting group that will seek to advise and support K–12 schools from under-resourced communities by helping them implement afterschool computer-coding programs and professional development for teachers.

"Most kids aren't getting exposed to coding,” Macalalad says. “If you ask kids if they want to be a coder, you might as well ask them if they want to be a Martian. We want it to feel real. You could very well have the next Bill Gates, the next Mark Zuckerberg, but you’ll never know because students lack the access and the support.”

Only one in 10 classrooms offer computer science courses, and that number is even worse for schools in under-resourced communities. Highlighting the severity of this issue, the Bureau of Labor Statistics says that by 2020 there will be 1.4 million new computer science jobs in the U.S., but only 400,000 qualified students graduating with the necessary skills. That is a gap of nearly one million jobs. To solve this problem, Macalalad believes we need to get coders and teachers with the appropriate training into classrooms. And that’s what CodingConnect hopes to accomplish.

Macalalad and his team will be working on CodingConnect this summer as part of the Harvard i-Lab’s Venture Incubation Program, which he describes as an incredible opportunity for the nascent company.

“The best thing about the incubator is normally as an entrepreneur, it’s a lonely thing, you’re dealing with a lot of issues, and it’s hard to relate to other people about the start-up,” Macalalad says. “So just having the support and being able to bounce ideas about some of the issues you’re having are invaluable.”

CodingConnect is working to form partnerships with school systems in Boston and Orange County, hoping to start pilot programs this fall with four public schools. They will offer coding to students in grades 6–8 five days a week, while also bringing in industry experts and student volunteers interested in teaching computer programming. Their first partnership will be with the YMCA in the Roxbury section of Boston, where they will run computer education programming for over 200 students this summer and fall.

“We'll be developing computer coding curriculum, like ‘Hacking Minecraft’ and ‘Technology in Music,’ to create programming that engages this demographic that we will hopefully use to scale to thousands of other students to get them interested in coding,” Macalalad says.

While coding is already underrepresented during the traditional school day, there is also an extreme disparity of coding skills amongst women and minority groups. Macalalad knows this issue first hand.

“My mom was a coder, and largely self-taught,” Macalalad says. “She was one of two women out of a hundred programmers at her job as a coder. I didn’t realize what a trailblazer she was in that respect.”

CodingConnect will look to not only bring quality coding resources to schools, but will also look to develop a mobile tech lab to help raise awareness of the importance of coding and tech skills.

“When you have greater diversity, you get greater solutions,” Macalalad says. “I think there are a lot of solutions we’re not coming up with because of the lack of representation from these communities. CodingConnect is trying to solve that.”

This summer, Macalalad and his team have been focusing on fundraising for CodingConnect. But getting the funds to support coding programs in schools is only half of their solution. The other is getting teachers excited and knowledgeable about computer programming, and that’s a lot trickier, Macalalad says, as he’s reached out to schools.

“Half the responses from teachers are we’re already overloaded and overworked and don’t understand the benefit, and the other half is they understand the importance, but they don’t really understand why,” Macalalad says. “We have to educate about the opportunities. We need to reinforce in the minds of those teachers who understand coding is important about the change it can make in their students lives.”