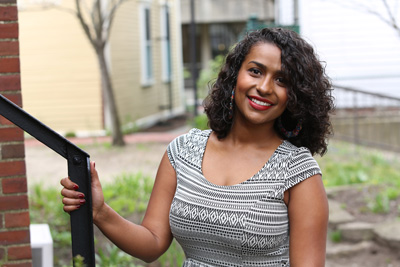 When Julissa Muñiz left her home state of California to enroll in HGSE’s Prevention Science and Practice (PSP) Program, she had some concerns. Namely, would she survive her first New England winter?

“My biggest fear before attending HGSE was the weather!” she says. “I was born and raised in San Diego and have lived in California my entire life, so the idea of snow and brutal winters was enough to scare me. Nevertheless I survived, in part thanks to my goose down coat.”

Muñiz was also nervous to leave behind the “like-minded” community of the University of California–Berkeley, where she completed her undergraduate studies. Would people at HGSE have the same level of social consciousness and civic commitment? This fear, she happily discovered, was unfounded. “Now that I am here I realize that the students make the institution,” she says. “I had the immense privilege of collaborating and organizing with some of the most brilliant womxn HGSE has ever seen, some of whom also received this award.”

Her year in PSP has helped Muñiz to refine her research interests, as well as more clearly see where her work in adolescent development and identity intersect. Next fall, she will begin her Ph.D. studies at Northwestern’s School of Education and Social Policy, furthering her education in human development and psychological theory, while maintaining her work’s ethnic studies lens.

“It is no surprise to me that Julissa’s peers identified her for this award. Without question, she has educated a lot of people in the short time she has been at HGSE. She is deeply committed to youth and the systems in which they learn and grow. And, to bringing her whole self to her work,” says Senior Lecturer Mandy Savitz-Romer, director of PSP. “During her time in PSP, she has sought to learn as much as possible from her peers, HGSE classes and faculty, and the broader educational community. Her questions are all in service to wanting to make education more equitable and more humane. As a valued member of the PSP community, Julissa has respectfully, but ardently demanded that all voices be considered and valued in the learning process.”

Upon learning that she had been honored with the Intellectual Contribution/Faculty Tribute Award for PSP, Muñiz answered some questions about her time at the Ed School and beyond.

What was your goal upon entering the Ed School? For years I have wanted to obtain a doctorate degree, but given my age I decided to pursue my master’s degree first. I wanted to give myself an additional year to develop my quantitative research skills given that most of my experience and training during undergrad was grounded in qualitative research methods. This year, not only have I developed my quantitative skills, but I also learned a lot about myself as a person, and as an emerging scholar. I met some of the most inspiring and beautiful people — people who are friends and future colleagues.

What will you change in education and why? I am interested in transforming the way we approach education within carceral spaces, particularly for youth who come into contact with the juvenile justice system. I am a firm believer in rehabilitation and education as the “practice of freedom,” thus if we can improve the conditions of their educational experience inside, they may embrace education a liberatory tool of empowerment. Rather than condemning our youth to a life of subjugation beyond physical confinement, we can use that space to intervene and provide them with the support they need. It is about closing the opportunity gap and giving kids a second chance.

Despite your busy schedule, you always make time for … my daughter, friends, and food!

The biggest surprise of the last year was … traveling to Cuba. When the opportunity came up I immediately moved to make it happen. Moreover, I traveled with the most amazing group of women and learned so much about Cuban culture and people.

What advice do you have for next year’s students going through your program? This year is going to fly by, so make the most of it. You decide what type of year you want to have. If you are anything like me, embrace the fact that you won’t know anyone and place yourself outside of your comfort zone. The only way you will build community is if you are intentional about it.

Read about the other recipients of this year's Intellectual Contribution/Faculty Tribute Award. Lisa Cenca, Ed.M.'21, recipient of the Phyllis Strimling Award, is a leader in designing enriching educational opportunities for girls.