Through Our Students' Eyes: Education in Latin America 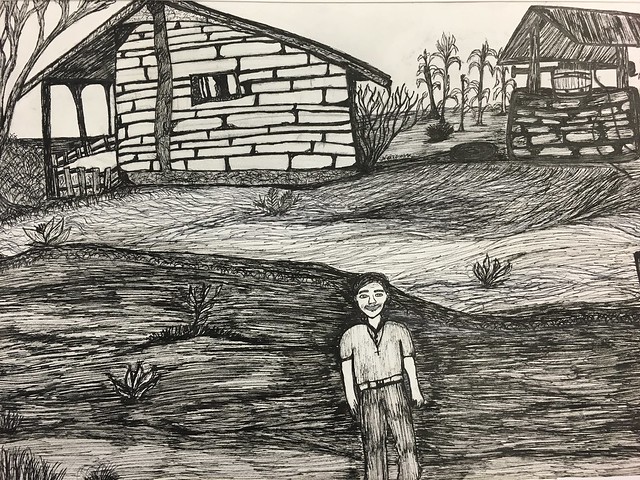 When Arts in Education students Isabel Diez and Hanako Sawada Lacerda began to plan this year’s Latin America Education Forum (LAEF) Conference, it was very important to them to make student artwork a prominent part.

“We wanted to bring arts into the picture, especially because of the artistic and cultural richness from countries in Latin America,” Diez says.

This year’s conference, entitled “Educational Equity and Opportunity in Latin America,” will be held on April 15 and bring together members of the education community across Latin America to engage in conversation around such issues as gender, migration, public policy, and — new this year — the arts. Last year was the conference’s first, and the arts were used in a more celebratory way; but this year, Diez and Sawada wanted to shift its purpose.

“We wanted to raise the students' voices,” Sawada says. “We have a lot of policy- oriented adults talking about the lives of these kids and their education, and what better resource is there to actually hear what life is like than from a student’s perspective?”

To capture that perspective, Diez and Sawada decided that the most accessible way was through student artwork. The two put out a call to students in kindergarten through college to submit original pieces of art capturing their feelings about education. Through the application, Diez and Sawada provided flexible, open-ended prompts to ensure that students felt creatively free to express their honest opinions about the education they experienced. At first, the project seemed like it might be a bust.

“For many weeks we actually thought we weren’t going to get anything,” Diez says, citing concerns that some of the students from whom they were requesting submissions were actually on summer break. “But two weeks before the deadline, we started receiving lots and lots of artwork.”

In all, the pair received over 118 pieces from students in Mexico, El Salvador, Chile, and Brazil. Those works will be on display in the Gutman Conference Center through April 17 in the exhibit, Through Our Students' Eyes: Education in Latin America.

The majority of the pieces are visual, although several students submitted poems, and there is even one musical composition. Sorting through the submissions, the pair decided to group the pieces around four themes: Daily Experiences, Community and Learning, Critiques, and School vs. The World.

Diez and Sawada say they were blown away by the honesty of the student art they received, especially considering that teachers submitted the work of younger students. The work offers both positive and negative views of education.

“What I noticed was that the students were very willing to share their artwork,” Sawada says. “They were very honest, some of them almost brutally honest, and I thought that was really telling of teachers also encouraging students to voice their opinions.”

In addition to their artwork, students completed artist statements, detailing their inspirations and the messages they were trying to convey, as well as a description of their lives as students.

“Those are amazing,” Diez says. “You can see the thinking behind the pieces.” Beyond just a glimpse into the mind of the artist, the statements also offer a chance for interaction. “The one thing we didn’t want this to be was just decoration,” Sawada adds. “We want people to respond to the art.”

The pieces offer a range of opinions around education, and it is clear that Diez and Sawada truly sought to capture a broad picture of student perceptions. While some are sweet, such as a 4-year-old student’s watercolor painting entitled My Slide,there are others that are quite profound.

Gabriela Arenas, a 19-year-old artist, submitted the pencil drawing, Los Tres Anonimatos (Three Anonymities), which depicts three monkeys — one deaf, one blind, and one silent — each representing her school’s principal, teachers, and students, respectively. “No one talks about what is real and what is going on,” Arenas writes in her artist statement.

The inclusion of student artwork will make for a unique LAEF conference this year, according to conference coordinator, Nicholas Moffa. “It brings diverse perspectives to the topic of educational equity,” says Moffa, a master’s candidate in International Education Policy. “The arts exhibit offers a new medium of communication.”

To truly make it a conversation, Diez and Sawada are asking exhibit viewers to submit their own responses to the work. These will then be collected and sent back to students.

In addition to the exhibit, Diez and Sawada will lead a discussion during the conference on April 15 at 10:30 a.m. in the Eliot-Lyman Room. They will be using a smaller sampling of student work to discuss closer looking.