Blending song, art, and education is par for the course for master's candidate Ben Leddy.
By Jill Anderson
April 27, 2016 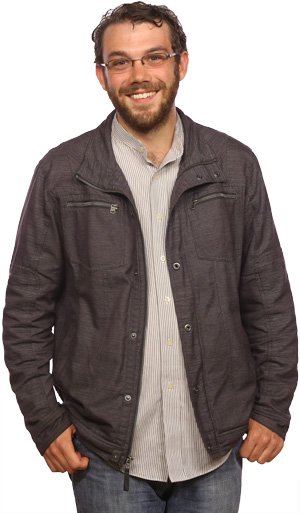 Benjamin Leddy is the social studies teacher you wish you’d had.

While teaching fifth grade social studies at Excel Academy Charter School in Boston, it wasn’t unusual for Leddy to break out into songs about taxation without representation or the 50 states of the union. In fact, blending song, art, and education is par for the course for Leddy.

Leddy, who comes from a musical family, also found inspiration in the lessons of his own teachers. While attending public school in a small town of central Illinois, Leddy remembers his physics teacher Todd Keating writing a song about calculating the speed of objects. He also recalls learning the well-known geography song, “Fifty Nifty United States.” The latter inspired his own educational composition, “Tap the Map,” which sought to improve upon the original by teaching the states in geographic order, rather than alphabetical order. When considering his own students in Boston — many who are English language learners or have special needs — Leddy realized that some students needed more than traditional memorization techniques.

“I wanted to teach in a way that was engaging and more inclusive than typical instruction…. It was so much fun and they were learning,” he says, noting that a year later many students still remembered the song and could identify the majority of U.S. states on a blank map. “Once I wrote that song and saw how it worked, I realized that I could write other songs and include something from a study unit or bring a topic to life.”

Leddy shares many of his instructional songs outside of school on his YouTube page. Initially created as a way for his students to study, the page soon began receiving feedback from other teachers and students. Videos on his YouTube channel range in topics from immigration to photosynthesis to the Boston Tea Party, with both original melodies and parodies of today’s most popular artists like Justin Bieber and Taylor Swift. He also began creating animations for the videos when he saw how much it added to his students’ enjoyment. Today his YouTube channel has close to 500 subscribers with the videos receiving more than 140,000 views.

Though the songwriting and videos can be a time-consuming process, Leddy says it’s worth it. “I love doing it and seeing how it brings the topics to life,” he says.

After three years teaching with songs and videos, Leddy became consumed with developing engaging curriculum, particularly for high-poverty populations where curriculum often focuses on “catching students up” academically. He came to the Ed School wanting to better understand the how poverty affects learning, how adverse experiences impact student outcomes, and how engaging curriculum can be part of the solution.

“You don’t have to choose between rigor and joy in the classroom,” he says. “By creating engaging curriculum we could help so many kids and make the classroom experience much more meaningful.”

During Senior Lecturer Joe Blatt’s course Informal Learning for Children this winter, Leddy gained more understanding of what it takes to create engaging learning opportunities. An eye-opening moment for Leddy came while studying how Sesame Street uses preschoolers to prescreen interest and engagement before filming episodes then reworks episodes if the children disengage with the content.

“When students disengage or look away, then we have to make it stronger,” he says. “I want to go that extra mile…. If I can bring that attitude to more schools, it means we will be bringing a curriculum that’s more effective and developmentally suitable for kids.”

As Leddy prepares to graduate this spring, he hopes to bring his form of engaged learning through music, art, and video to much larger audiences as he focuses on curriculum development and children’s media.

“It is the hardest choice — where to focus my energy and attention — but also a question of scope in terms of the impact you can have,” he says. “Knowing somewhere in the country there are a bunch of kids dancing in their classroom…. I hope over the long term that those types of classroom experiences will help kids and get them to love social studies, history, and being in school.”