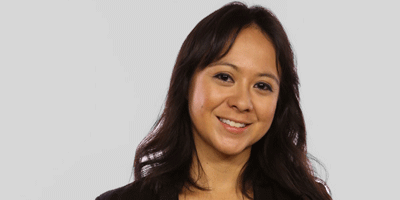 Master’s candidate Lorena Martinez  has a simple but powerful educational philosophy: “Community and family engagement is essential in helping students be successful,” she says.  “You can’t do it any other way.”

This philosophy was at the forefront at the Breakthrough Collaborative, an organization that recruits high school and college students to work with high-potential, low-income middle school students to increase their school success and put them on paths to college. Martinez — who, as the first in her family to attend college, understands the transformative power of education — joined the organization as an undergraduate in sociology at the University of California–Berkeley.

“I joined Breakthrough because its mission of supporting highly motivated, low-income students resonated strongly with me,” Martinez says. “Breakthrough seemed like the perfect opportunity to serve communities that were similar to my own.”

Founded in San Francisco in 1978, Breakthrough’s goal was not only to increase academic opportunity for underserved students, but also to inspire and develop the next generation of teachers. During multiple six-week sessions over the summer, college and high school students become teaching fellows, working with the middle school students while also receiving guidance from professional educators, part of Breakthrough’s “Students Teaching Students” and “Teachers Training Teachers” model. Over its 35-year history, Breakthrough has worked with over 40,000 students and nearly 16,000 teaching fellows, 75 percent of whom chose education as a career.

For two summers Martinez worked as a teaching fellow at the San Juan Capistrano branch of Breakthrough. Her positive experience there inspired her to join Teach For America following graduation, where she was assigned to a school site on the Rosebud Reservation in South Dakota. Martinez taught and lived on the reservation with a handful of other TFA members. “You become ingrained in the community and I loved that,” Martinez says.

Although far from home and somewhat isolated, Martinez never lost her confidence in her newly chosen profession. In fact, the model of community education she witnessed on the reservation inspired her.

“In the community I taught in, parents had a strong desire for their students to learn about their culture,” she says. “For example, we started every morning with a drum song and students took Lakota language classes everyday. I believe there are no better role models for a community than community members themselves.”

Martinez took what she learned in South Dakota back to Breakthrough San Juan Capistrano where she became executive director. Martinez is proud of the work that she and her team did there.

“We increased the percentage of students applying to four-year colleges by 86 percent,” Martinez says. “We had the highest growth in reading and math among all the Breakthrough sites. We had 100 percent teacher satisfaction with the program.”

Recognizing once again how successful a community-education partnership can be, Martinez decided to attend Harvard Graduate School of Education to expand her leadership skills.

“The great thing about the School Leadership Program is that we get to work at schools and get to work very closely with principals,” she says.  “I have learned so much working alongside these great school leaders.”

“They were really positive experiences because I believe schools need to do both, teach content and academic skills, but be mindful of the social and emotional skills students need to build,” Martinez says.

Her goal now is to bring Breakthrough’s model to a traditional public school district, hopefully starting as an assistant principal next year and then moving up to principal. But eventually, Martinez would actually like to end up back on that reservation in South Dakota.

“I would love to start a Breakthrough site there,” she says.  “I can easily see Breakthrough's students-teaching-students model not only benefiting younger, middle school students but also students from the Rosebud Reservation that do go to college,” she says.