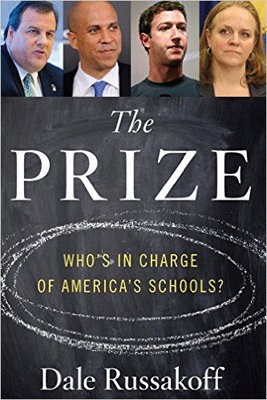 In 2010, Facebook’s Mark Zuckerberg pledged $100 million dollars to fix the Newark, New Jersey, school system. Forming an unlikely trio with then-mayor, Democrat Cory Booker, and Republican Governor Chris Christie, Zuckerberg shared the politicians’ vision to put in place a massive reform effort that would expand Newark’s charter networks and reward its high-performing teachers with large bonuses. In the end, they imagined creating a nationwide model for reform. But, after five years, this model has failed to materialize.

Veteran reporter Dale Russakoff’s new book The Prize, details the successes and failures of this effort. Russakoff visited the Ed School on Monday to talk about her book in the year’s first Gutman Library Distinguished Author Series event.

“Tracing the process by which big public policy ideas do or don’t translate into actual changes in people’s lives,” said Russakoff is what motivated her to write The Prize, and what has fascinated her throughout her nearly 40-year career as a journalist covering politics, education, and social policy.

Education philanthropy witnessed a major shift at the beginning of this century, said Russakoff, as the majority of donors moved from the foundations of long dead industrialists to living billionaires, who would apply to public education the entrepreneurial skills that had helped them succeed in technology and business. These wealthy new investors became known as “venture philanthropists,” and they believed they could fix the broken system of schools in this country.

The problem in Newark, said Russakoff, was that despite the good intentions of everyone involved, this top-down approach to system change ignored the most important members of the community: the students, the parents, and the teachers.

“Had they engaged the best teachers and principals in Newark at district and charter schools in planning their agenda, they might have taken a different approach,” Russakoff said. “But this entire plan was formulated without the input of Newark residents or educators.”

In fact, Russakoff added, “Newark parents learned about the revolution coming to their children’s schools,” at the same time as Zuckerberg made his announcement on national television.

Sharing a blend of uplifting and sobering firsthand accounts of the schools she visited in Newark, Russakoff reiterated that she was struck by how many sides were ultimately being left out of the discussion of education reform, most especially the kids. Through The Prize, Russakoff said, she feels she can fill this gap.

“I hoped it could spur a more honest exchange about what children and schools in cities like Newark truly needed to succeed,” Russakoff said.

While the major players in the Newark effort hoped they could discover a silver bullet for the education problem, Russakoff believes there is no such thing. Getting resources to teachers and principals is critically important, but she stressed that a one-size-fits-all model of education reform is not the solution. Russakoff left the audience with the insight of one district schoolteacher she spoke with during her investigation.

“We have to ask of every school: What does this particular school need in order to meet the challenges of the neighborhood it’s situated in?  And then we simply have to find the courage to provide it.”

For more: Listen to an EdCast with Dale Russakoff. Lecture Timothy McCarthy discusses some important books in his life and career.