U.S. Senator for Massachusetts Elizabeth Warren talked higher education, student debt, and the importance of reform at the Askwith Forum on September 18, 2015.
By Jill Anderson
September 22, 2015 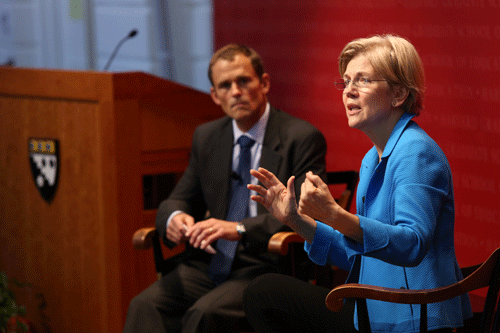 “This country is in real trouble,” Warren said, noting that the most basic building block of a 21st-century economy is a highly educated workforce. At this rate, said Warren, by 2020 there will be 5 million more jobs that require a college credential than college graduates available to fill them.  Why? The “exploding” cost of higher education results in too many learners unable to attend or finish college.  And those who do complete college are saddled with compounding debt. In fact, according to Warren, the total student-loan debt in the United States has grown by $100 billion in just the past year.

“If young people drown in debt, we drown our future,” she said.

Warren used her own story to illustrate the power of education and the importance of education access. The daughter of a janitor, she had no money to attend college. However, she earned a scholarship and enrolled with goals of becoming a school teacher. By 19, Warren got married, had a child, and dropped out of college. She figured her dream was over except for the fact that she lived near a community college that cost $50 a semester. “It opened a million doors for me,” she said.

Warren credited her career as a senator to the fact that America once invested in kids through education. “Education is the story of America and how we build opportunity,” she said, encouraging the audience to help return to that mode of thinking.

Though she acknowledged that the U.S. education system requires many changes, Warren focused her talk on the cost of higher education. The first step, she said, is guaranteeing that all people can attend a high-quality public university debt free. Further, she said, more resources need to be made available for people to attend college through increased federal and state supports such as restoring Pell grants and cutting interest rates.

Warren also proposed an incentives-based system for colleges since, she said, colleges face no consequences for “high prices and low quality.” Specifically, Warren singled out for-profit colleges as a problem.

“Students are left with mountains of debt,” she said. “Just over 10 percent of all college students attend a for-profit college. They take out about 20 percent of federal loans in student aid and [are] responsible for 44 percent of all student loans defaults … we cannot keep pouring money into schools without demanding something in return.”

Many of her ideas garnered applause from audience members, who later asked questions about the defunding of Planned Parenthood and where graduates should focus their energies.

In closing, Warren answered a question about her favorite teacher. A teary-eyed Warren recalled her second-grade teacher as a person who always made her feel she could do anything. “I knew every day I walked in that room that this is a place I’m going to feel loved,” she said. “I looked forward to being there and that’s what teachers can do.”

What the Future of Education Looks Like from Here

A discussion about the interconnected challenges of listening, belonging, and collective responsibility when it comes to educating and nurturing young people today.