Alum Garron Hillaire's nontraditional academic path has led him to help others through Universal Design for Learning.
By Jill Anderson
March 17, 2015 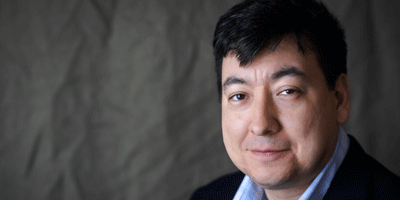 The computer programmer – who had a 12-year career under his belt – was grappling with whether to study business or education. “Having been a part of the technology boom in Seattle, I didn’t see a lot of meaning behind the work I was doing,” he says. “We were just making the machinery of society a little more efficient,”

Upon walking through the doors of Longfellow Hall for a prospective student open house, he recalls being struck by a John Dewey quote on the wall: “Making a living, economically speaking, will be at one with making a life that is worth living.” The quote resonated with Hillaire, who was looking for a more mission-focused life.

Although he enrolled in the Technology, Innovation, and Education Program believing he would work in an educational technology business, he graduated uncertain of his next steps. Turns out, HGSE was the transformational experience he hoped for and he no longer looked at the business world the same way.

So when the opportunity arose to work for CAST, a nonprofit founded by Lecturer David Rose which works to expand learning opportunities for all individuals through Universal Design for Learning, Hillaire pursued it. He became captivated by his work as an educational software architect for CAST, his position stretching beyond computer programming into research, consulting, and engaging with practitioners about how technology can be used to incorporate all learners.

In many ways, Hillaire recognizes that the work he does now could very well have been helpful for a student like himself, someone with a self-described “jagged educational trajectory.” At CAST, “we are designing for the whole population including the people on the fringe,” he says. “I can personally relate to this goal. Growing up in a Native American cultural context I felt like I was part of a fringe population.”

Growing up in the Pacific Northwest, and later Hawaii, as part of the small Lummi tribe, Hillaire’s education consisted of multiple moves and time spent in different American school models ranging from alternative schools to private schools, and was also influenced by the culture of his tribe. When he landed in a high-standards private high school, he struggled to measure up and upon graduating passed on attending college. His talents on the computer landed him a job in programming, but after eight years as a professional, he wanted more. He enrolled in a mathematics program at night at a nearby community college, later transferring to a four-year college where he earned a bachelor’s degree.

His own experience influences the work he continues to do at CAST.

“I should have had [an education] that takes into account my background and holds me to the same standards while acknowledging that I might have some additional needs,” he says. “I had an experience that wasn’t a successful experience. And, part of that is growing up in a multicultural background and reconciling a blend of Native American and American culture with the American school system.”

At CAST, he now gets to dedicate his time to figuring out the best ways for education to reach everyone through UDL.

“What I love about CAST is it gives me a wide range of experiences from talking with teachers to contributing to technically innovative large scale research projects… and  this range provides me a means to test my understanding about learning in the real world,” Hillaire says. “I have an opportunity to look at a teacher in a classroom and help answer questions to address challenges they are facing and in the same day think through data visualization implementations for complex learning data in the context of a research project.”