A Different Space for Learning 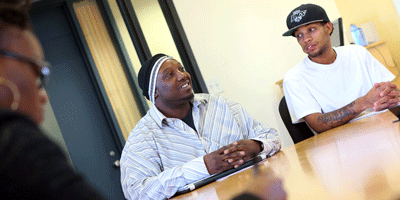 At 42, Luis “Shorty” Rodriguez decided it was time to change his life.

As a young man, he had fallen into a life of organized crime and drug dealing, and been incarcerated multiple times. Like many, he struggled to find a way out. When he began suffering seizures while in prison, he believed it was time to start anew. “It really opened my eyes that I shouldn’t be that way and to change my ways and character, and to be another Luis,” Rodriguez says. “I’m not a little kid anymore so everything I’m trying to achieve…. I’m trying to be a good person.”

Part of Rodriguez' new path included spending time this semester working with Harvard Graduate School of Education student volunteers at the Work Readiness Workshop. The workshop, a pilot program developed between the Graduate Students in Various Efforts of Service (G.I.V.E.S.) program and the Haley House Transitional Employment Program (TEP), aims to help develop participants’ personal narratives, resume-writing skills, and communication in the workplace, as well as teach them how to utilize social media and other tips for job searching.

“We did not want to prescribe frameworks and specific behaviors the participants must practice. We wanted participants to uncover the strengths they already possess as tools that can transcend the time spent on campus,” says Moriska Selby, an Ed.L.D. candidate, who facilitated and designed the curriculum focused on building resilience to setbacks which can often lead back to incarceration. “It was about the participants making the plan rather than us telling them the plan that would be best for them.”

Knowing this, the five program sessions stretched beyond what one might consider traditional work readiness. Although there were talks about creating resumes, conducting job searches, and building interview skills, other sessions discussed legality and also facing and overcoming adversity.

The idea for collaboration between the G.I.V.E.S. program and TEP began last year. Haley House Program Café and TEP Manager Jeremy Thompson (pictured, left) saw a need to add more work preparation for participants to the already robust real-life employment opportunities offered at the bakery. After meeting with Thompson, Tracie Jones, who runs the G.I.V.E.S. program out of the HGSE Office of Student Affairs, thought a collaboration would be great opportunity for both HGSE students and the Haley House.

“These volunteer opportunities create a different space for learning and also allows for our students to engage with a different population,” Jones says. “[Our students] are going on to become education leaders and policymakers; it helps to know some of the people in the communities and hear their stories in order to see in a different light.”

The workshop – which ran throughout the semester – purposely only had two participants. Thompson, who has worked with this population for years, contended it was essential to find the proper candidates for the pilot program. “It’s a very small program,” Thompson explains. “I was looking for people who already made a change in their life that we could build upon.”

Before being selected, Haley House candidates interested in the workshop went through a rigorous interview process that included discussing challenges and writing essays about what they wanted to do with their lives.

The second participant – in addition to Rodriguez – was Luis Contreras (pictured, right), who had been living in a shelter. He heard about the program from Thompson and, because he likes and wants to work, did whatever he could to participate.

The small size of the group allowed Rodriguez and Contreras to build close relationships with the volunteers, among them master’s candidates Erin Esparza (International Education Policy) and Jacqueline Iloh (Prevention Science and Practice). Additionally, the HGSE volunteers took time to go to Haley House on their own and meet with participants one on one.

“As much as you think you have to offer them, they have just as much to offer us,” Iloh says. “We are all lifelong learners and they were just as eager to learn as anyone else.” Their enthusiasm reminded Iloh of the youth she worked with in the Dominican Republic – students are eager to learn, but need exposure and access to partnerships like this one.

Rodriguez and Contreras came to the HGSE campus for the sessions so they could be in a new environment, meet different people, and see that they could be a part of another community — even one at Harvard.

“I do think it makes a difference to go into another world that you weren’t a part of before,” says Esparza, who noticed a change in the participants from the beginning to the end of the program. She says they became more confident and comfortable, especially in being open to telling the session facilitators when they didn’t understand something.

It wasn’t unusual for the participants to stay after sessions and continue talking with the facilitators in the Gutman Café. The experience at HGSE is a “learning experience” like nothing he ever had before, Rodriguez says.

Jones plans to continue the Work Readiness Workshop in the coming years. Next semester Selby, as well as the other students who volunteered this semester are planning to continue working with the program which is set to expand to six participants.

Before the program had concluded, it appears to have had a positive impact.  Rodriguez already reports finding a steady job. Contreras – who enjoys cooking and working with vegetables – hopes to find work in a kitchen.

“I think positive as a result of the program,” Contreras says, noting that he feels a mental and physical preparation to enter the working world. “I don’t see [the change], but I can feel it.”

Although the pilot program appears to be a success, the desired outcome stretches far beyond participants finding jobs.

“This has more to do with psyche than the program itself,” Thompson admits. “It’s a boost to their morale and self-confidence to be able to go back into society and put that this is what they did, where they’ve been, and to say it proudly.” Teachers and students benefit when people come together. A special collaboration between HGSE and FAS has yielded the first secondary field to connect with a Harvard graduate school, providing Harvard College students the opportunity to pursue their intellectual interests in education more formally.