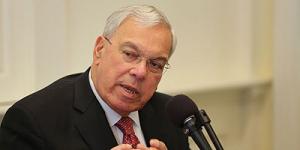 The news of former Boston Mayor Thomas Menino’s passing yesterday reverberated within the Harvard Graduate School of Education community. A regular visitor to the Harvard Graduate School of Education, Menino is remembered fondly by members of the HGSE faculty – many who worked closely with Menino. Here they reflect on his work and character, as well as the way he affected their lives and work in education.

It was one of the great honors of my life to work with Tom Menino. He was deeply serious about making people’s lives better, and he was a tremendous champion of children. He wasn’t in it for the show. He was also a very wise strategist, a genuine listener, very funny and a true friend, and he had a side that was incredibly kind and sweet. When my son was seven, he took us to Boston Garden to see Beauty and the Beast on Ice. I will miss him very much.

I had the privilege of meeting Mayor Menino when he was a City Councilor. I phoned him looking for approval for a project. This elected official traveled to my office in the Boston Public Schools to meet with me. I remember being shocked that someone in his position would actually come to my office. He wanted to know firsthand about my proposal. Little did I know that he’d become Mayor of Boston and that this commitment to meet the people and get out onto the city streets to know the real story would become his trademark.

When I was principal of the Timilty Middle School in Roxbury we were searching for new audiences for our students’ writing. We had our students write a letter to many leaders from around the State. In their letters students asked busy adults to become their pen pals. We had no idea if anyone would respond. Much to our amazement many leaders in business, industry, government, education, and the philanthropic world wrote letters. Mayor Menino was one of them. For more than 25 years Mayor Menino was a Promising Pen Pal to a Timilty student. He also became a mentor to many of his pals and stayed in touch with them throughout the years offering guidance, advice, support and an active interest in their wellbeing.

Mayor Menino was a huge supporter of education and of educational opportunity for students in all settings: public schools, faith based schools, charter schools, and independent schools.

Tom Menino was a fierce advocate for “his city” and “his kids.” He was direct, forceful, and yet sensitive and compassionate. His deep, visceral commitment to children and education, his mischievous sense of humor and authentic humanity made him one of the most beloved public figures of our time. He believed in the transformative power of education and did everything he could to see to it that all Boston children would benefit from high quality schools. It was an honor to work with him. For me, he will always be a powerful example of leadership.

I met Mayor Menino twice. Both times I was just one of a large crowd of people -- children, their parents, and their teachers -- at the Perkins School, a tiny elementary school in the middle of a housing project in South Boston where my husband, Barney Brawer, Ed.M.’77, was the principal.

I will always remember Mayor Menino's strong handshake, the way he looked me straight in the eye and asked for my name, and much more importantly, the way he interacted with the children. Both times I met him, he stayed at the school for a very long time. It was as if he had all the time in the world to spend with the children (this was no fly-by mayor). He greeted the children one by one, shaking their hands, asking them questions, smiling and looking them straight in the eye! He did the same with their teachers. He was clearly enjoying himself. Mayor Menino's total attention to the second graders' play (he stayed for the ENTIRE play) was beautiful to see. I will always remember his handshake and the warmth, kindness, and honesty that exuded from Mayor Menino's being. What a terrible loss.

Mayor Menino was a mentor and a friend. He gave me some of the very best advice I've ever received about leadership and the importance of always reaching out and listening to the community. His last piece of advice for me, which he gave me this past summer was, “Karrh (smile), don't be discouraged by the yesterday people -- the people who are always looking backwards. Go with the today and tomorrow folks - they want to move forward.’ I will miss him terribly!

Mayor Menino was deeply involved in improving the Boston Public Schools for all children including children with disabilities. For instance, he was a strong supporter of the Henderson Inclusion School and other inclusive schools in Boston. He attended many events at the Henderson and did not miss an opportunity to use his "bully pulpit" to insist that Boston would be an inclusive community for all. His support for inclusion went beyond the schools and included such things as making playgrounds accessible and establishing a task force on autism long before others recognized this as an issue. Countless parents and children benefited for his leadership. He will be deeply missed.