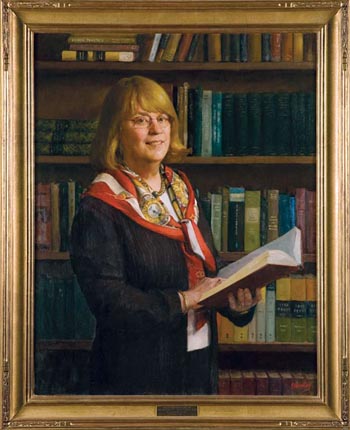 Ellen Condliffe Lagemann began her tenure as dean on July 15, 2002. Prior to her appointment, Lagemann, a nationally known expert on the history of education and education research, had been the president of the Spencer Foundation. Previously, she taught at New York University where she served as chair of the Department of the Humanities and the Social Sciences and was director of the Center for the Study of American Culture and Education. She also taught at Teachers College, where she was also a member of the Department of History at Columbia.

Lagemann has the distinction of being the third woman to be dean of a Harvard faculty and her appointment marked the first time that two women simultaneously served as deans of different faculties. Being appointed from outside the HGSE faculty allowed Dean Lagemann to bring a fresh approach to issues facing the school.

A key principle underlying Lagemann’s three years as dean was an emphasis on translating education theory and research into actual tools that teachers and students could use in learning environments. To this end, the “Usable Knowledge” initiative was created. During these years, several conferences were held under this theme and papers from one of them were later published as the book Scaling Up Success: Lessons From Technology-Based Educational Improvement.

In December 2004, HGSE combined the administrative structure of the Principals’ Center and Programs in Professional Education (PPE) into one unit. Lagemann also reached out to the other Harvard University faculties to enhance the university’s role in improving K–12 education. From this, the Public Education Leadership Project — a collaboration of HGSE and the Harvard Business School — and the Achievement Gap Initiative —an effort to help study and narrow the achievement gap in education — were formed. Her tenure also established core courses in the school’s curriculum across disciplines. The structure of HGSE’s academic programs changed orientation, moving away from “areas” in the academic programs to a broader, school-wide approach to academics. Also, $22,000,000 was raised during her tenure.

Lois Woolley’s aim in portraiture is to make the work meaningful not only to the subject and their family but “universally relevant” to all viewers. To this end, an initial meeting is arranged in the sitter’s home or the artist’s studio. Besides talking about specific requirements for the work, the purpose of this visit is to build rapport between Woolley and the sitter. At her first meeting with Dean Lagemann, Woolley says, “I was moved by the direct quality of her gaze. She came across as very open, genuine, and engaging. She is a wonderful conversationalist, with quick humor and deep insight. It became imperative to me that I convey these qualities in her official portrait.”

The artist has stated that she wants to observe in a person the nuances of gestures and expressions that may be particularly characteristic in that individual as “the challenge in painting portraits is to catch that essence of who a person is, their spirit and emotion, in a painting.” In this portrait, Woolley had Lagemann stand in a “naturalistic pose” appearing to interact with the viewer. Woolley is an oil and pastel painter whose specialty is portraiture. Much of her work has been commissioned by individuals for personal collections rather than public commissions for organizations. The artist was especially excited by this commission as a portrait of a dean is “always a great addition to a portrait artist’s portfolio” and “this was for Harvard!”

Woolley’s professional training began at age seventeen at the Corcoran School of Art (Washington, D.C.) and continued at the Art Students League of New York. At the Art Students League, she studied drawing and anatomy with Robert Beverly Hale and painting with Robert Brackman. Additionally, she studied under Daniel E. Greene. Always searching to combine full color with strong form, she credits her association with painter and husband Hongnian Zhang to her current style. Woolley is currently a professor at the Woodstock School of Art where she teaches courses in portrait painting. She lives in Woodstock, N.Y., and shares a studio with Zhang.