With a new app — and an appearance at this weekend’s Alumni of Color Conference — alum Samantha Pratt brings urgency to conversations about mental health and trauma in schools.
By Emily Boudreau
February 24, 2020 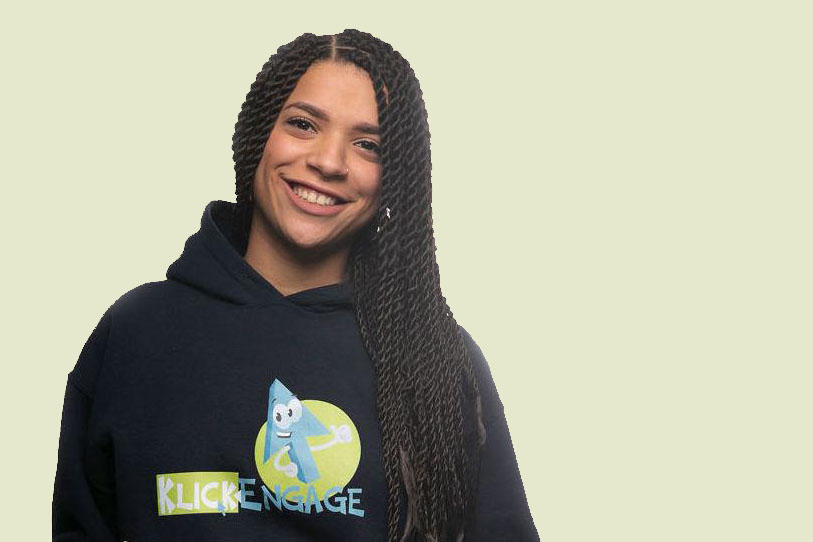 It’s a simple enough question to ask: “How are you doing today?” Yet according to Samantha Pratt, Ed.M.’19, it’s one that educators often don’t have time enough with students to ask in a meaningful way. Pratt recognized that gap and created KlickEngage — a web-based app that allows teachers to check in with their students via a brief daily survey that asks how they’re feeling that day and tracks wellbeing over time.

“My time in the classroom really drove home the urgency to create something like KlickEngage,” says Pratt, who was named to Forbes' "30 Under 30" list of education difference-makers for 2020. A former teacher who often found that she was reacting to student behavior rather than anticipating it, Pratt says, “I had been thinking about what it would be like to actually know what my kids came into school with, because I can’t sit down and talk with them every single day, given how my school, and a lot of other schools, are run.”

For educators across the country, the school day is packed full of material they need to cover, and they’re often forced to adopt a triage-like system to prioritize students who receive support. In communities that have absorbed a lot of trauma, teachers may find that they’ve been desensitized to the way in which trauma manifests in a school setting. This means that teachers may often overlook students who don’t demonstrate overt behaviors that signal stress or that reveal they’ve experienced a traumatic event outside of school. “It occurred to me that, [as a teacher] I was only seeing the problems I was exposed to.... It made me realize I had to do something now so these children would feel like somebody was actually listening to them,” Pratt says.

After participating in a few business accelerators, Pratt created a mock-up for KlickEngage and conducted market research. She arrived at HGSE after having developed a full business plan and having received significant grant funding for KlickEngage. “I wanted to become more of an expert in the space,” Pratt says of her decision to enroll in a master’s program even as the momentum around KlickEngage was growing. “I was very interested in the idea of leveraging organizations that are already solving problems and making them work more efficiently.” After graduation, KlickEngage received a Camelback Ventures grant, and Pratt went on to focus on the company full time.

As the CEO, Pratt sees KlickEngage as a way to complement and support schools, teachers, and communities. She plans to expand it beyond a web-based app and wants to create toolkits to equip students, teachers, schools, and parents with ways to advocate for themselves and provide access points for services and information. “People want to know how this is replacing human interaction. And that’s not the goal. There’s nothing that can replace a kid feeling cared for. It’s supposed to be a starting point for conversation,” Pratt says.

Though running a start-up comes with a steep learning curve, Pratt knows firsthand the importance of making others feel cared for and realizes the potential of her company to make a difference in the lives of young people. But she wonders about how to extend the scale and reach of her program, recognizing that the focus and openness around mental health, trauma, and social-emotional learning has only recently gained attention.

“I’m struggling with this idea that I can’t solve the problems for people who aren’t kids right now — what about everyone over the last 10 years who I wasn’t able to support? Everyone that is [now] an adult who missed out on services? How am I able to reconcile that with my mission?” Pratt says.

Pratt will return to HGSE this week to speak at the Alumni of Color Conference, hoping to continue to influence and inspire educators and expand the conversation about systemic supports for students. “If we can at least build the comfort with asking about feelings and checking in with each other as a habit in the youth we’re raising now, that is going to have an impact later on,” she says.