The Sesame Workshop CEO talks about the role of educational media and the special bond between Appian Way and Sesame Street.
By Emilly Boudreau
October 7, 2019 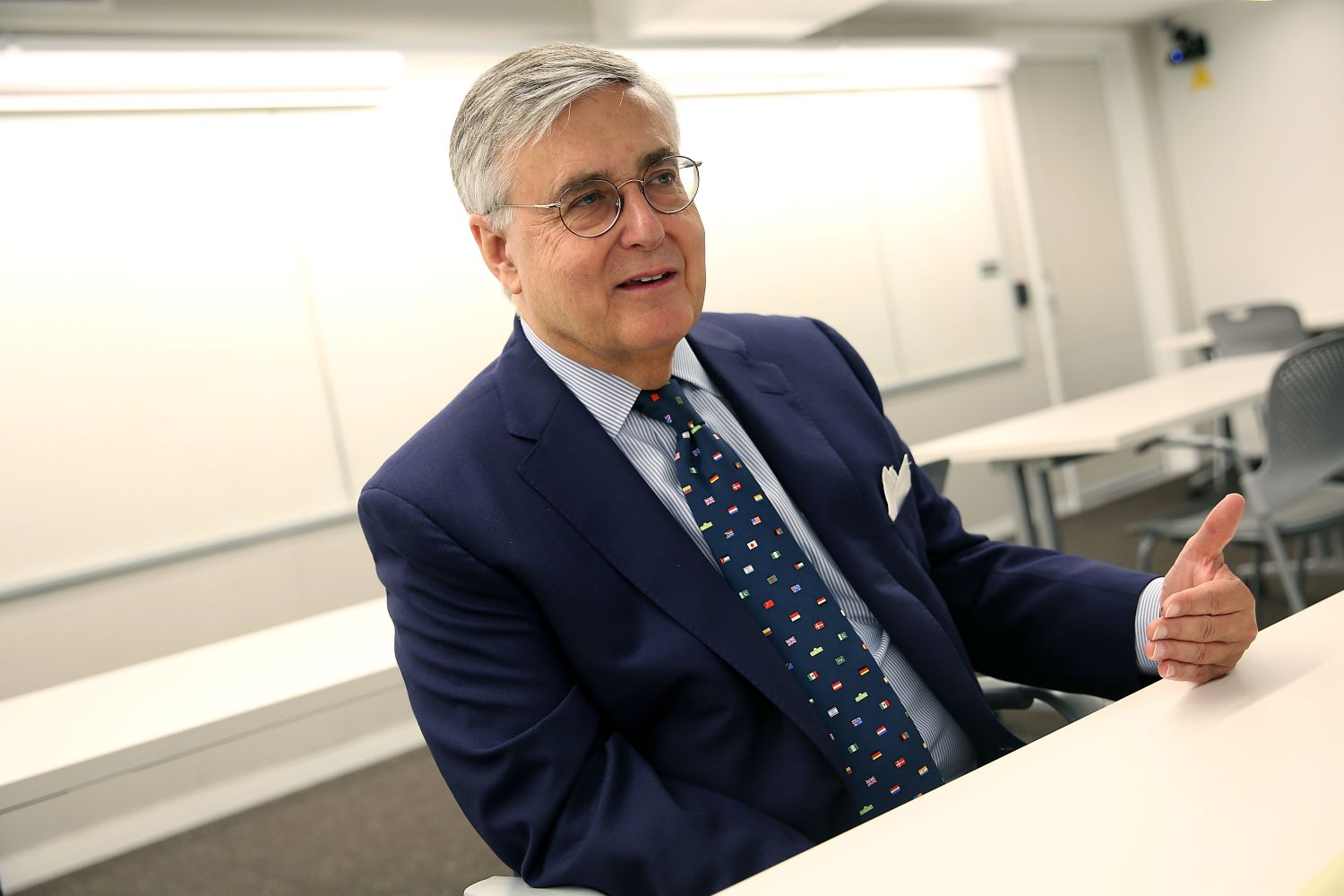 Jeff Dunn, CEO of Sesame Workshop, has long recognized the power of education to help children grow smarter, stronger, and kinder. Since 2014, Dunn has led the organization through changes in media technology and developments in education research — working to ensure quality educational programing for young children all over the world. HGSE has often played a part in helping Sesame achieve that goal. When Dunn visited Harvard to mark the 50th anniversary of Sesame Street, we sat down with him to talk about the future of the HGSE and Sesame Workshop partnership and the transformative power of education.

Q: How do you envision the collaboration between HGSE and Sesame playing out in the future?
A: The relationship between HGSE and Sesame is pretty symbiotic. The benefit that we get is the faculty research and the educational efficacy of our work — and what HGSE gets is real-life practice. We do [the work together to] build the field. I’m hoping every time we do something like this, more people are inspired to want to help kids, and to make this their life’s work. Our missions are very aligned. Our mission is to help kids grow smarter, stronger, and kinder. The role of the Ed School is to birth another generation of educators that can help in that.

The great thing about being driven by mission is that it’s not technology driven. Fifty years from now, as long as we stay true to the mission of helping kids grow smarter, stronger, and kinder, and as long as the Ed School knows the concepts behind the best way to do that, I think we’ll continue. The mission of the institutions will be aligned, will be the same, will be symbiotic — research and practice working together.

Q: When did your commitment to education begin?
A: I grew up outside of Hartford, Connecticut, in a town called West Hartford.  Hartford has the dubious distinction of being one of, if not the, poorest state capital in the country. When I was in high school, I became a teacher’s aide at a middle school in the inner city of Hartford.  I quickly realized that but for a distance of 3 to 5 miles, who my parents were, the color of my skin … goes my education. That realization never left me. I understand that my life was made by my education. And we are dedicated to equal access to education — that’s what Sesame is all about. It’s “how do you give kids, disadvantaged kids, access to numbers and literacy at the age that matters most?”

Q: What has been a highlight of your work at Sesame?
A: I came to Sesame five years ago when the company was having financial difficulties. The media industry had changed, and we were losing a bunch of money. I came because I thought I could help, and we’ve been able to restore the health of the organization.

The other most satisfying thing has been winning the MacArthur 100 & Change Competition to solve a significant world problem. We won with this idea to educate refugee kids in the most difficult circumstances and in conflicted countries. And it was an enormous, emotionally satisfying result. We put so much effort into it over a long period of time …. There are 60 million refugees in the world right now — more than any point in time since World War II. Half of them are kids. Without access to education, what hope do they have?   Humanitarian aid has prioritized food and shelter, [but] education is every bit as important to life as food and shelter are. Our pitch was the first time people had taken that [into account].  We’re going to try to change the life of these kids. We totally changed the way people think about what kinds of things aid programs should encompass, and that education should be a part of those efforts.

Q: What’s something you think educators should know about children’s media, and what do you think people in media should know about education?
A: I think that what educators should know about media is in some ways the same thing they should know about teaching: If you can’t grab their attention, if you can’t reach them, you can’t teach them. Everything we do has to be done through a lens of engagement and entertainment. How do you take that principle and make sure kids are engaged by it in some way? Education, at its core, in order to be successful, has to be about engagement at all levels. I think what we should know about education is that the science behind education is expanding all the time. When Joan Ganz Cooney and Lloyd Morrisett started this show, there was no brain science to tell them that the most important years of a child’s life were 1 through 5. Today, 50 years later, we know that more than 90% of the brain develops in those first five years; we know about the synapses that max out at age three. The ongoing science behind what we do that is the thing we have to keep most current with.