Alum Eve L. Ewing returned to Appian Way for an exploration of feminism, poetry, and the power of imaginative thinking.
By Timothy Butterfield
September 18, 2019 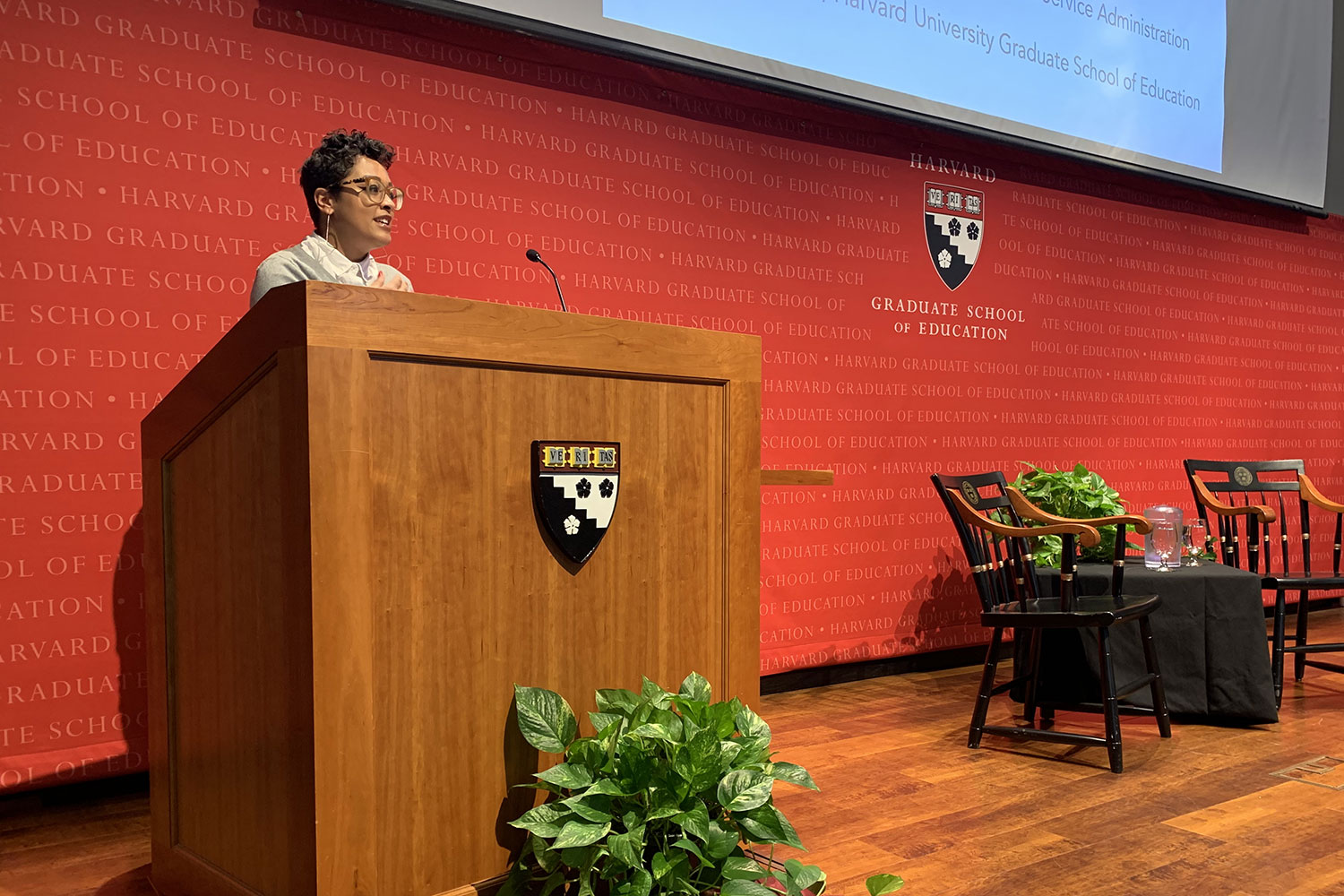 The Askwith Forums welcomed Eve L. Ewing, Ed.M.’13, Ed.D.’16, back to the Harvard Graduate School of Education for a conversation about feminism, imagination, and writing with her HGSE adviser, Professor Sara Lawrence-Lightfoot. Lawrence-Lightfoot welcomed Ewing and expressed her deep gratitude at watching her former students “find their voices and hit their strides.”

Ewing — a sociologist, poet, comic book writer, and professor at the University of Chicago — opened her talk by sharing her conviction that feminism necessitates people of all genders working together to make a world “more characterized by care.” “Feminism is a praxis; it’s not something you are — it’s something you do,” she said.

Over the course of her career, Ewing has identified a general reluctance to think beyond the accepted routine, she said. While social scientists consider the context of the world at present, “poets look forward and imagine,” Ewing said. When it comes to considering solutions to challenges, this imagination can pull us to the next level of progress. How disappointing it is, she asked, that one societal question we hear a lot is, “Should incarcerated people be able to vote?” when really we could be asking, “How can we effectively reform the entire prison system?”

Imagination can help us strive to reach new heights and consider what the world could be, not just what it is, said Ewing.

“It is far easier to think of our dislikes than to dream of the ideal,” said Ewing, pointing out that most people spend more time complaining about things than allowing themselves to think about how to achieve improvement — or what improvement would even look like. If we allowed ourselves to think bigger in education, for example, we would consider not just how to have students of color at a university, but how those students of color can be of the university.

Ewing encouraged the audience to not overgeneralize things, but to instead look at the complexities that make our society the way it is. Displaying a sequence of panels in her Ironheart comic book, Ewing highlighted how superheroes usually oversimplify good versus evil, but that Ironheart, whose alter ego is Riri Williams, a black teenage college student, challenges what “good” is — choosing in the displayed comic to not immediately condemn a smartphone thief, but instead to consider why the young person might have been driven to thievery.

Sharing a bit about her writing process – including her favorite place to write (Chicago’s Harold Washington Library) and a meaningful writing desk at home that she originally purchased as a student at HGSE — Ewing said that she always tries to write about people in a way that would make those people feel good about themselves, and she tries to honor their many facets.

“I believe it is possible to be many things at once, because I don’t know what else to be,” Ewing said.

What the Future of Education Looks Like from Here

A discussion about the interconnected challenges of listening, belonging, and collective responsibility when it comes to educating and nurturing young people today.