On February 21, civil rights activist Rev. Jesse Jackson spoke to the Ed School community — and the Harvard EdCast — about diversity and the role educators can play in fighting inequality.
By Tyler Tarnowicz AND Matt Weber
February 23, 2017 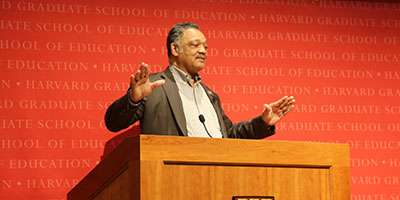 A chorus of cheers greeted Reverend Jesse Jackson as he entered Askwith Hall on Tuesday. A prominent civil rights activist known for his involvement in the Civil Rights Movement, Jackson was invited by HGSE’s Black Student Union to speak at an event entitled “Threads of Diversity,” a part of a larger campus-wide program honoring Black History Month. Using the quilt as a symbol of American society — and inspiration behind the lecture’s title —  Jackson remarked “a quilt without patches is just rags,” noting the strength in unity rather than separation through difference.

In an attempt to reflect on the current political and social climate in the United States, Reverend Jackson guided his audience through the last four centuries of plight for historically marginalized communities the United States, citing periods from Native American genocide and the enslavement of African-Americans to Japanese internment and Jewish persecution. In tracking this history, Jackson recognized the significance of the very institution at which he was speaking, going as far to shine light on Harvard’s role in such events, stating “we [African-Americans] are not at the bottom of Harvard, but at its foundation.”

In identifying injustices and the institutions that propagated them throughout history, Jackson reminded his audience that these were not simply conditions of a distant past, rather circumstances that provide the backdrop of a world in which we see ourselves today.

In light of this current climate, Jackson provided three ways for Americans to respond: First, they can adjust to the situation, choosing to recede into indifference and turn a blind-eye. Second, people can internalize the situation and become resentful so that they actively shut out others. Or, third, people can resist and fight for what they believe is morally right. Only through removing the walls that separate us, said Jackson, can we move toward a country that is more inclusive and just for all of its citizens.

Recognizing the importance of education in achieving this goal, Jackson urged future generations of students to usher in this vision, reminding the audience that “strong minds break strong chains.” Reflecting further, Jackson called for voting reforms that better construct a system that promotes, protects, and gives greater access to voting for more Americans. When asked for steps on how students can enable their own agency as activists, Jackson highlighted the importance of taking education seriously, doing research to shine light onto issues, and taking necessary steps to act with intentionality.

“There’s magnetism in the rightness of you cause,” Jackson remarked. “Don’t give up on loving and caring.” With COVID causing huge setbacks in education systems around the world, what is the path forward for developing nations? Harvard EdCast: Giving Thanks in the Classroom

How bringing gratitude into the classroom can have a positive impact on student learning.