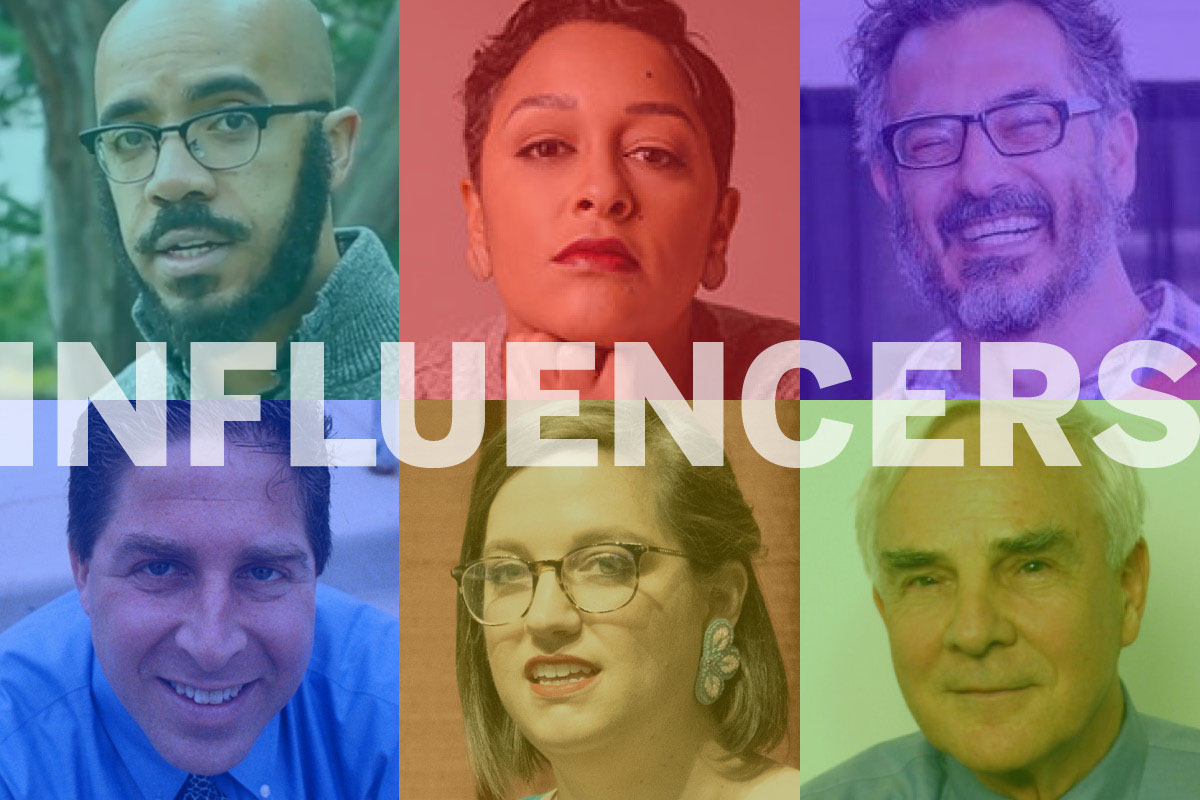 These days, when we think about the word “influencer,” we often think about celebrities and famous faces who help shape how their followers and fans consume culture, spend their days, or spend their money.

But we're proud that HGSE has its own influencers — and their impact on the field of education is undeniable. They both inspire and create change; they lead conversations, they accelerate calls for equity, accuracy, effectiveness, and justice. The six alumni and students highlighted below are changing the education landscape through their words and their advocacy — in print, in digital communities, in person, and on the airwaves.

HGSE alumni are raising their voices — through media, social platforms, blogs, podcasts, and more — and they are being heard.

Eve Ewing holds many titles: sociologist, poet, artist, author, assistant professor, podcast host, Chicago native and spokesperson, cultural organizer, activist, and, according to her highly followed and influential Twitter feed (with more than 213,000 followers), “black girl from outer space.” As a writer, Ewing moves seamlessly between scholarly works (Ghosts in the Schoolyard), poetry (1919, Electric Arches), and comic books (Marvel's Ironheart), touching on topics of race, education, and social justice. The Chicago Tribune even called her “a truly rare cultural phenomenon: An artist who not only holds up a mirror to society, but makes herself a catalyst to change it.”

Scroll down the list of education books on Amazon written or edited by Frederick “Rick” Hess and you’ll be scrolling for quite a while. Hess, a political scientist who focuses on K–12 and higher education issues, has written or edited, to date, somewhere in the neighborhood of 40 books. He’s also a regular op-ed contributor to Forbes, the National Review, and Education Week, where he writes the popular blog “Rick Hess Straight Up.” He’s a resident scholar at the American Enterprise Institute in Washington, D.C. and also an executive editor of (and regular contributor to) the Harvard-based Education Next magazine.

Now an assistant professor of American studies at Brown University, Adrienne Keene wrote an active blog for nearly a decade called Native Appropriations. The blog, a forum for discussing representations of Native peoples, including stereotypes, cultural appropriation, news, and activism that has received international attention, even had a Facebook page with more than 100,000 followers. Keene still maintains a Twitter feed with around that same number of followers. More recently, she has been the cohost of All My Relations, a podcast that invites guests to delve into a topic currently facing Native American people, and just this month, she contributed a profile of Wilma Mankiller to Time Magazine's 100 Women of the Year project.

John Merrow began his career as an investigative educator reporter for NPR back in the early 1970s, then went on to become an education correspondent for the PBS NewsHour before starting Learning Matters, a nonprofit education production company. During his time in the national spotlight, he won the prestigious Peabody and George Polk awards and was nominated for an Emmy. Now, his weekly blog, The Merrow Report, tackles controversial issues like project-based learning, teacher training, politics and ed policy, and international test results.

With regular pieces in The Atlantic, Forbes, Slate, the Washington Post, and Washington Monthly, education journalist and blogger Alexander Russo helped launch several influential education-related news sites after leaving a series of education policy jobs in New York and Washington, D.C. In 2015, he started a must-read blog called The Grade to highlight, as he says, “the strengths and weaknesses of mainstream education coverage.” He is a recipient of the Spencer Education Journalism Fellowship at Columbia University and the 2018 winner of the Education Writers Association award for opinion journalism. He is also the author of two books, including Stray Dogs, Saints, and Saviors: Fighting for the Soul of America’s Toughest High School.

With more than 315,000 Twitter followers, current Ph.D. student Clint Smith is well above the platform’s average follower count of 700. Even The Daily Show follows him. It’s no surprise: Smith, a former high school teacher who still teaches incarcerated students, was named to Forbes 30 under 30 list in 2018 and to Ebony magazine’s power 100 list the year before. He cohosts the podcasts Pod Save the People (with fellow activists DeRay Mckesson, Brittany Packnett Cunningham, and Sam Sinyangwe) and Justice in America (with Josie Duffy Rice). He is also a poet; his first full-length collection, Counting Descent, came out in 2016. He writes regularly for The New Yorker, among other publications, and is currently working on a nonfiction book on slavery called How the Word Is Passed.

Read more about the work of Eve Ewing, Clint Smith, and Adrienne Keene while they were HGSE students.

Listen to episodes of the Harvard EdCast with John Merrow and Rick Hess.