From HGSE to the President’s Office 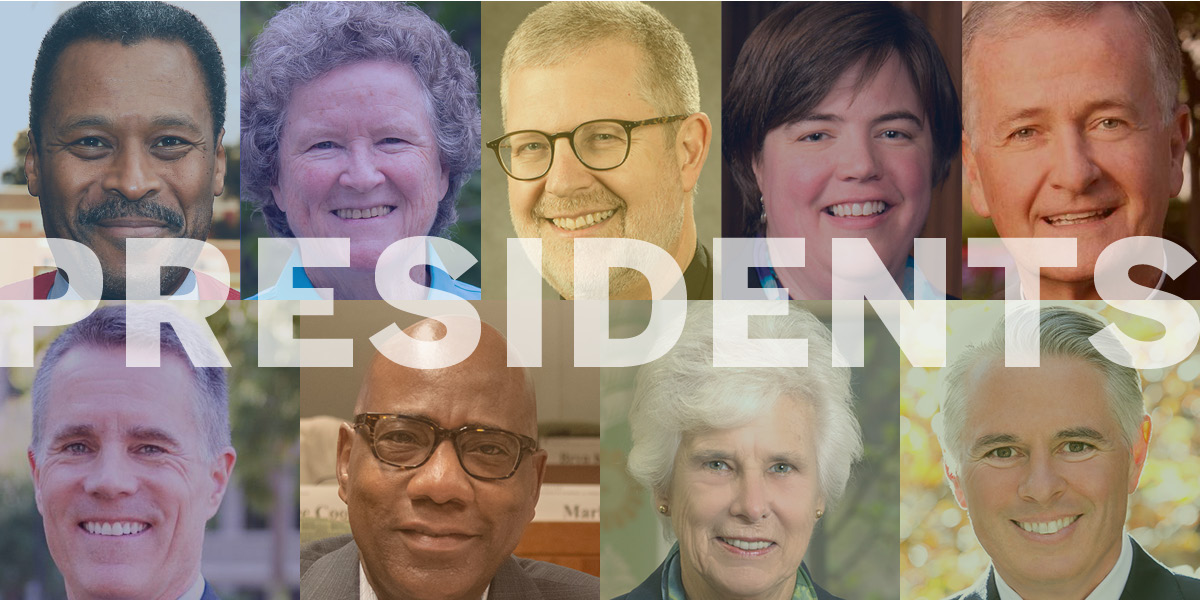 As college presidents manage unprecedented demands, HGSE has played an important role in cultivating the leadership skills, fundraising acumen, and vision-setting agendas that these positions now require. While HGSE supports college presidents through influential professional offerings, including the Seminar for New Presidents, the school’s degree programs have also seen a number of graduates go on to success in higher education leadership. Here are a just a few of the HGSE alumni who have made a difference.

HGSE has been committed to training and supporting college presidents, with benefits for generations of students.

M. Therese Antone, Ed.D.’80
Sister M. Therese Antone has tirelessly served her undergraduate alma mater, Salve Regina University in Rhode Island, for decades. A tenured professor and former executive vice president for advancement, she stepped into the presidency in 1994, then transitioned into the office of the chancellor in 2009. Sister Therese has led Salve Regina to improved rankings and grown its endowment from $1 million to more than $60 million. She serves on numerous boards and committees and has received accolades including the National Conference Humanitarian Award, the John E. Fogarty Achievement Award, and the Mercy Higher Education Leadership Award.

David Greene, Ed.M.’91, Ed.M.’94, Ed.D.’02
Higher education, particularly in the liberal arts, can be resistant to change. But as president of Colby College, David Greene has maintained innovative aspirations. A main priority of his leadership has been to increase Colby’s global focus, and Greene has created DavisConnects, which guarantees funded global experiences and supports internships and research opportunities for students. Greene has also focused on collaboration and partnership with city leaders in Waterville, Maine, to ensure that as Colby grows, so will the Waterville job market. Colby is planning both a new arts and innovation center and a new athletic complex, and it recently built an apartment complex for Colby students and faculty focused on civic engagement and community partnership.

Tito Guerrero, C.A.S.'74, Ed.D.'77
One of the first people of Hispanic descent to hold a college presidency in the U.S., Tito Guerrero has now held the role at Cambridge College, Stephen F. Austin State University, and the University of Southern Colorado (USC). While at USC in the late 1990s,  Guerrero was praised for balancifg the school's budget and making great strides toward ending a six-year enrollment decline. In his current role as director of the Hispanic Association of Colleges and Universities' (HACU) La Academia de Liderazgo, Guerrero works to prepare vice presidents and other senior leaders for executive roles at higher education institutions, particularly Hispanic-Serving Institutions (HSIs) or emerging HSIs. The establishment of La Academia was in direct response to the declining numbers of Hispanic higher education leaders, despite an increase in enrollments of Latinx students.

Dennis Holtschneider, Ed.D.’97
From 2004–2017, Dennis Holtschneider served as president of DePaul University in Chicago, the nation’s largest Catholic University. His impact on the institution is apparent, as both the new performance center and an endowed chair position have been named in his honor. Most notably, Holtschneider prioritized expanding the interdisciplinary Catholic studies field by establishing the Center for World Catholicism & Intercultural Theology, and under his leadership, DePaul became the leading global center for research on the Vincentian tradition. Holtschneider holds eight honorary degrees and currently serves as the president of the Association of Catholic Colleges and Universities.

Richard Hopper, Ed.M.'97, C.A.S.'00, Ed.D.'04
Richard Hopper has been the president of Kennebec Valley Community College (KVCC) in Central Maine since 2012. Under his leadership, KVCC has been ranked by the Aspen Institute among the top 120 community colleges in the United States for three years in a row. Former senior education specialist in the World Bank’s Europe and Central Asia Region and senior education analyst at the Organisation for Economic Co‐operation and Development, Hopper has strengthened KVCC's ties to its community and state, ensuring that its education standards are relevant to Maine’s labor market, resulting in a consistently high job-placement rate for students. Hopper is leading the expansion of KVCC with a new campus in Hinckley, Maine; the growth of fields of study in early education, energy services technology, and sustainable agriculture; and the introduction of programs such as food science and culinary arts.

Robert Huntington, Ed.D.’97
After 25 years in the corporate world, Robert Huntington assumed the presidency of Heidelberg University in 2009, and his impact on the northern Ohio institution has been apparent through its many innovations. Huntington’s administration launched a faculty-student mentoring program that eases the transition to college life, as well as the Four-Year Graduation Guarantee, which offers individualized tracks for students to follow toward a graduation within four years. It introduced a co-curricular transcript — in addition to the traditional academic transcript — that details a student’s career-oriented opportunities and skills in communication, conflict management, values, and work styles. Huntington brought a free MBA program to campus, which allows all students to earn a tuition-free MBA in just one year after earning a bachelor’s degree.

Timothy Lannon, Ed.D.’00
Timothy Lannon served an eight-year presidency at Saint Joseph’s University in Philadelphia before transitioning to the helm of his undergraduate alma mater, Creighton University in Omaha, Nebraska, in 2011. During Lannon’s time at Creighton, the institution recorded its highest enrollment and raised nearly $100 million as part of the Ignite the Greatness campaign. Lannon’s administration expanded the school’s athletic center and brought Creighton into the Big East athletic conference in 2013. In partnership with CHI Health, a top-15 American health care system, Lannon expanded the strategic affiliation by providing the primary teaching sites for the School of Medicine, College of Nursing, School of Dentistry, and School of Pharmacy and Health Professions.

Susan Stuebner, Ed.M.’98, Ed.D.’03
Colby-Sawyer president Susan Stuebner has been proactive in her first four years on the job. Initiating a strategic plan early on, she led her institution to a successful capital campaign of $45 million — the largest in the college’s history. One of Stuebner’s primary focuses at Colby-Sawyer has been establishing a clear, strategic direction for expanding college’s health sciences program — a crucial undertaking at a time when New Hampshire and the nation are seeing significant decreases in health professionals. She brings to the presidency her own relevant research and professional interests, which center on leadership and sustainability of private, residential, liberal arts colleges with small endowments.

Peggy Williams, Ed.D.’83
Peggy Williams served as president of Lyndon State College (now Northern Vermont University-Lyndon) before becoming the first female president of Ithaca College in New York, a role she filled for 11 years before retiring and being named president emerita in 2008. At Lyndon State, Williams brought enrollment to its highest levels at the time, established an institutional advancement division, and added programs of study in math, liberal studies, and sports medicine. At Ithaca, Williams established programs and centers dedicated to the study of culture, race, ethnicity, and LGBTQ education. She led an unprecedented $145 million comprehensive campaign and initiated new degree programs: master’s degrees in teaching and business administration and a physical therapy doctoral program. Williams commitment to community service and sustainability brought a “Day of Service” to Ithaca and the construction of two platinum LEED buildings.

David Wilson, Ed.M.’84, Ed.D.’87
David Wilson has always cared deeply about putting students first, and for the past decade as president of Morgan State University, a Baltimore HBCU, he has fortified his institution as a key producer of American innovators. Under Wilson’s leadership, Morgan State has completed a $250 million campaign and boosted its alumni giving, graduation, and second-year retention rates. Morgan State’s research classification has been elevated from R3 to R2, and the university earned a multimillion-dollar research contract from NASA. Wilson’s administration founded the School of Global Journalism and Communication, which has contributed to Morgan State’s top production of Fulbright scholars among HBCUs. Wilson has been named a top-100 leader in higher education by the American Association of Higher Education

John Silvanus Wilson, Ed.M.’82, Ed.D.’85
Higher education leaders often wear many hats throughout their professional careers. John Silvanus Wilson has been a senior administrator at MIT, head of the White House Initiative on Historically Black Colleges and Universities under President Obama, president-in-residence at HGSE, senior adviser and strategist to the president at Harvard University, and, from 2013 to 2017, the president of his undergraduate alma mater, Morehouse College in Atlanta. At Morehouse, Wilson fought for STEM initiatives, increased the institution’s private gifts and grants, brought President Obama to campus as the 2013 commencement speaker, and raised the college’s four-year graduation rate. In 2018, Wilson was appointed the senior adviser and strategist to the president as Harvard worked to implement the recommendations of its Presidential Task Force for Inclusion and Belonging. – Timothy Butterfield

This is just a sample of the HGSE alumni working as higher education leaders. If you or someone you know is doing this important work, please tell us your story.

Watch a speech from John Silvanus Wilson at HGSE Convocation in 2018.