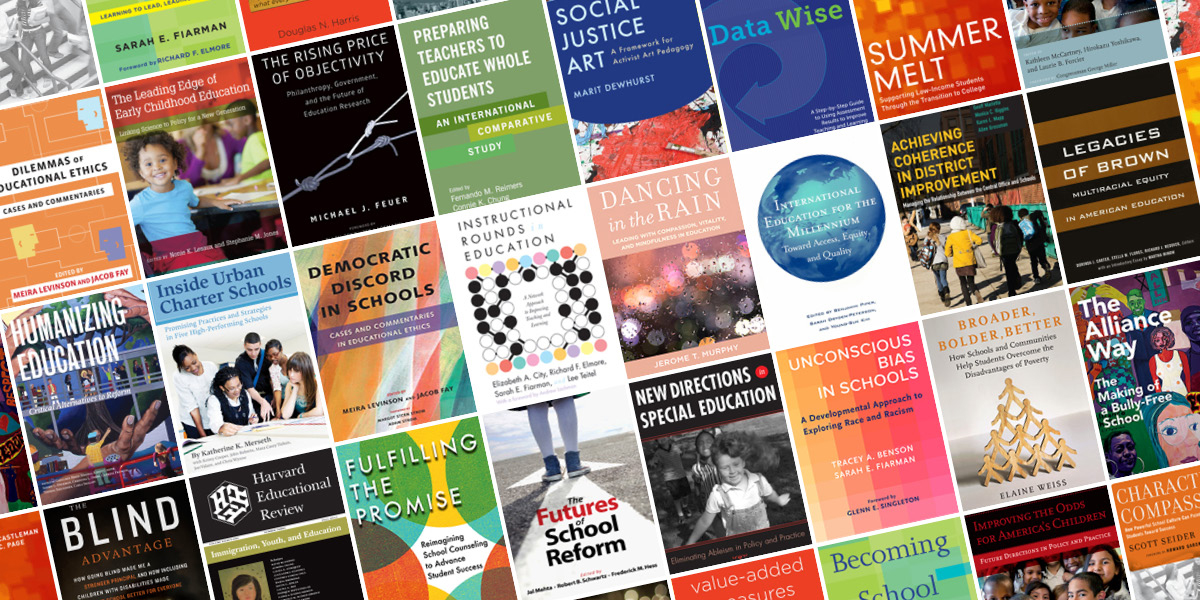 The year was 2002. Doug Clayton and a few of his colleagues at the Harvard Education Publishing Group, which had been publishing the bi-monthly Harvard Education Letter and the Harvard Educational Review journal, wanted to expand into the book world. But, as Clayton notes, they wanted to start a university-based publishing house with a very specific goal: to publish books informed by education research but aimed at people in the worlds of education policy and, especially, education practice — the school leaders, teachers, principals, superintendents, and other education professionals who needed access to new and credible strategies and ideas.

A University press reaches out to practitioners and policymakers, with a catalog that captures important debates and a range of viewpoints.

The timing was perfect to launch the Harvard Education Press. As Clayton explains, “the press grew up, so to speak, in the era of No Child Left Behind. This turned out to be an auspicious time for a young publishing house determined to serve practitioner and policy readerships.”

On the one hand, school leaders and teachers needed expert guidance when it came to understanding and following the new legislation. In addition, federal policy was also sparking widespread debates, especially within the education policy world.

“HEP decided to publish books representing a wide variety of views on the new legislation and the circumstances it created,” Clayton says. “In fact, HEP decided very early on in its history to represent important debates within the field, whether in connection with No Child Left Behind or with other controversial topics in the education world. As a result, debates often occur across the pages of our catalog.”

Since those early days, HEP has grown. In its inaugural season, three book titles were published. It now publishes 28–30 books a year, and its books have been translated into 12 languages, including Arabic, Croatian, and Korean. The HEP backlist reads like a who’s who of education scholars and influencers, including Tony Bryk; Susan Moore Johnson, M.A.T.’69, Ed.D.’81; Rich Milner; Larry Cuban; and Frederick Hess, Ed.M.’90. Among its notable titles are perennial favorites Data Wise (by the Ed School’s Kathryn Parker Boudett, Elizabeth City, and Richard Murnane) and The Behavior Code (by Jessica Minahan and Nancy Rappaport). – Lory Hough

Explore the Voices of Education blog which includes posts from HEP authors, as well as contributors to the Harvard Education Review.

Listen to episodes of the Harvard EdCast featuring HEP authors on Unconscious Bias in Schools and Rethinking Recess.