Elsa from Disney’s Frozen, Elphaba from Wicked, Tevye from Fiddler on the Roof, and Cinderella from Into The Woods — all guest speakers in my Adult Development discussion section at the Harvard Graduate School of Education this year.

Adult Development is a course taught by Professor Robert Kegan that explores what’s called constructive-developmental theory (CDT), a framework for understanding how adults make sense of the world around them. According to CDT, the capacity of a person’s sense-making system typically matches the demands of his or her environment. At times, however, the demands placed on an individual outweigh his or her capacity to make sense of them. Consider a few archetypical examples: A daughter is torn between her personal wishes and the expectations of her parents. A middle manager is feeling squeezed between seemingly contradictory demands from above and below. A leader struggles to make a necessary but unpopular decision. 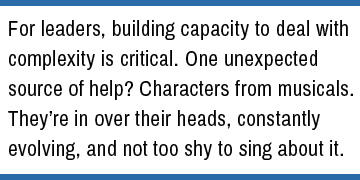 It can be physically painful when we face a situation that demands more than we currently have. Often, we feel it in our gut. We feel stretched, torn, stuck, or even sick. These feelings may compel us to retreat, kicking the can down the road; we may try to ignore feelings of anxiety, confusion, or frustration.

But for people in positions of leadership, these are rarely sustainable options. In fact, increasing one’s own capacity to deal with complexity is critical to leadership.

To make sense of these concepts with my students, I enlisted the help of some famous characters from musical theater and film. I found that these fictional characters were particularly powerful for illuminating constructive-developmental theory. Here’s why:

Characters in Musicals are in Conflict

Characters in musicals are frequently in over their heads (which happens to be the title of one of Kegan’s books on adult development). They’re experiencing demands that are far more complex than what they have previously experienced. Elsa and Elphaba are both trying to figure out where they belong, torn between what the world expects of them and what they feel inside. Tevye is trying to reconcile his commitment to his Jewish faith and his daughter who is leaving home with a man outside of his faith. Cinderella is rethinking what she wants, unsure if palace life is all that she hoped it would be.

Characters in Musicals Are in Transition

The “developmental” part of constructive-developmental theory refers to the idea that individuals have the capacity to fundamentally change the way they make sense of their worlds. Characters in musicals let us see this transition happen. As Elphaba sings, “Something has changed within me. Something is not the same. I’m through with playing by the rules of someone else’s game.”

We can see these characters constructing meaning differently than they did before. And we can also see how these new ways of thinking can open up previously unimagined possibilities.

Characters in Musicals Think Out Loud

Perhaps the most common mockery of musicals is the seemingly unrealistic practice of characters spontaneously breaking out into song. Characters in musicals have the ability to hit a pause button on reality in order to think, reflect, and express their thoughts to the audience. In the musical Into The Woods, Cinderella explicitly labels this opportunity, during a scene when she stops time while running down the steps of the palace, chased by the prince. She sings advice to herself, “Better stop and take stock while you're standing here stuck on the steps of the palace.”

For the purposes of constructive-developmental theory, it is not enough to know what characters think or do. We need to understand why they are thinking or doing it. These moments in musicals give us precisely this opportunity — a glimpse into someone else’s head.

By bringing these moments and these characters alive in my classroom, I was able to give students a new entry point into an otherwise complex topic — and a new lens onto their own personal development. And like most of the best classroom moments, we had some fun in the process. Zachary Herrmann
Zachary Herrmann is a program director and lecturer at the University of Pennsylvania Graduate School of Education. A former math teacher, he received his doctor of education leadership from the Harvard Graduate School of Education in 2017. Follow him on Twitter at @zachherrmann.
See More From This Author
See More In
Arts Learning and Teaching School Leadership
Perspectives + Opinions
Make Learning Visible
Public displays of excellent student work should be the rule, not the exception.
Jessica Lander
Arts, K-12, School Leadership Perspectives + Opinions
The Challenge of Change
Resolving to close the gap between our values and our daily work as educators.
Zachary Herrmann
K-12, Learning and Teaching, School Leadership