What happens when you push a writing assignment past the first (and second) draft?

The assignment: choose an issue you care about — bullying in school, gang violence in the city. Keep it local. Over the next three weeks, brainstorm, research, write, and edit a powerfully worded newspaper op-ed. The very best will be printed in the city’s newspaper.

For weeks, we have been studying the leaders of the progressive era. My students have discussed excerpts from Upton Sinclair’s The Jungle; held formal debates on the 19th Amendment and women’s suffrage; and analyzed speeches from W. E. B. Dubois and Booker T. Washington.

But for their final project I wanted to shift the historical focus forward and create an assignment that was timely and immediately relevant, one that would give them opportunities to revise their work. 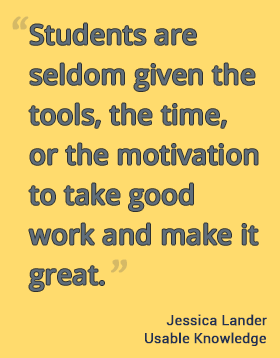 We know that learning is powerful when made tangible and relevant to the lives and futures of our students. An increasing number of schools and programs are embracing this notion by promoting project-based learning and community-centered initiatives.

But we don’t talk enough about the importance of craftsmanship.

In the professional world — from cooking to consulting — people are rarely satisfied with a first draft. They revise and tweak and discard entire iterations, all in pursuit of creating a great final product. Too rarely do we ask students to do the same.

In my experiences in schools, both as a teacher and as a learner, students are seldom given the tools, the time, or the motivation to take good work and make it great. As a teacher, I will be the first to admit guilt, having returned countless assignments covered in comments with little expectation that students will try to revise.

I wanted this assignment to be different. And I wanted to model it on one I had personally experienced.

Last year, in class at the Harvard Graduate School of Education, Visiting Professor Pasi Sahlberg gave us a seemingly unusual assignment. Instead of a customary five-paragraph-style essay, he challenged us to write a newspaper op-ed. We would have important ideas worth sharing as we progressed in our careers, he explained, but we’d need to learn how to communicate those ideas clearly and eloquently.

The assignment stands as one of the few practical writing projects I’ve ever been assigned.

We studied the style and structure of excellent op-eds; we heard first-hand from editors of major education blogs; and, most importantly, we wrote a multitude of drafts.

In my high school classroom, I hoped to emulate both the project and process.

My students were quick to fill the white board with ideas: cheating in schools, discrimination, racism, negative attitudes towards English language learners. Others listed bullying, cyberbullying, smoking, drugs (opioids in particular), sexual harassment, and Islamophobia.

Their ideas were deeply rooted in personal stories, which surfaced as we began structuring and outlining. There were childhood friends killed by gangs, or by drugs. There were accounts of online bullying, or being followed down school halls and accused of terrorism.

With topics selected, it was time to begin writing, and rewriting.

I have found few guides to teaching the process of editing. There are wonderfully lyrical books on writing, like “Several Short Sentences About Writing” by Verlyn Klinkenborg, but, for practical, classroom-ready tools, I turn to the ideas of Ron Berger, the chief academic officer for the Expeditionary Learning Schools Network.

Berger believes that craftsmanship cultivates student confidence. “Students know they are capable of great things when they see themselves create great work,” he told me.

In his writings, Berger outlines two important concepts for teaching the crafting process: the first is to show and discuss models of excellent work, which students can aim to emulate; the second is to build a classroom culture of peer critique (which I wrote about in a recent post).

For the op-ed project, I attempted to incorporate both. I gave my students Boston Globe op-eds to dissect and to use as models for their individual essays. As their ideas developed, I created a series of opportunities for students to read and review each other’s work, employing Burger’s maxim “be kind, be specific, and be helpful” as our guide.

I found too that Google Classroom and Google Docs were essential tools, allowing me to easily add multiple rounds of comments and edits that my students could tackle in class and at home. (Though I also quickly realized how time-consuming it was to make three rounds of edits to 60 individual papers.)

In the computer lab and the classroom, my students grappled with words: how to write clearly, powerfully, and succinctly. Craftsmanship not only fosters confidence, but also grit and problem-solving skills. I guided and watched as one girl struggled to take eight sentences and say the same thing in three, how one boy stared intently at his screen for minutes on end as he tried to construct a closing thought.

Most surprising, and most exciting, was how seriously my students approached the task. They showed up before school, after school, during lunch, during advisory period. They came with questions, or ideas, or simple updates on their progress. In class, even my most stubborn troublemakers could be found intently typing away.

There are a growing number of schools weaving craftsmanship into the learning culture. At the Renaissance School in Springfield, Massachusetts, for example, revision is a core value, and eighth-graders make an end-of-year public presentation on their process of developing craftsmanship. We need more schools to seriously teach (and reward) craftsmanship, to teach students how to develop the determination and confidence they’ll need to succeed at college and in careers.

To do this, we’ll need more tools and reliable techniques for teachers. And we’ll need more time — both in daily schedules and in more flexible curricula. But the result will be well worth the effort.

My students have submitted their final op-eds. In a few weeks, after we make final decisions, five of those op-eds will be selected to appear in the city newspaper. After all their hard work, and their many rounds of editing, five students will get to see their ideas, their words, and their names in print. And all of my students will know that they’re capable of great work — because they’ve seen themselves do it.

A quick update, March 1, 2016: The five strongest op-eds were published last month in a full-page Sunday spread in our local newspaper, complete with each of the student’s byline and photo.

The school's response and my students' reactions have been wonderful to watch. One student-author reported that her entire class broke out in applause when she walked in; another said her teacher asked her to read her op-ed aloud. Another student was asked by the headmaster to speak on a panel focused on her article topic.

I was sitting at my desk finishing a sandwich between classes one day when a student walked in. “Everyone keeps asking me about my op-ed; they keep talking to me about what I wrote," he said. "I've decided I'm going to write more op-eds. I want to share more ideas.”

Read all the posts in Jessica Lander’s series:

Back to School
In a new blog series, a young teacher chronicles the journey from research to practice.
Wanted: Time to Collaborate
Everyone Knows Teacher Collaboration is a Good Thing. Why don’t we make it a priority?
A Parents’ Night Recipe
Making family engagement a priority — one batch of cookies at a time.
Go, Team
Why student teamwork is important, and how teachers can build a game plan.
It's Good — Let's Make It Great
What happens when you push a writing assignment past the first (or second) draft?
The Stories of Their Lives
Helping displaced children honor their origins and look to the future with hope.
Teacher Tested
Why can’t our certification tests measure what’s really important for teachers to know?
How to Get Better
What will it take for teacher evaluations to become a meaningful tool for professional growth?
How Do You Change a Culture?
Combatting everyday bigotry in schools and society.
Pocket Connector
How texting helps one high school teacher break barriers and forge new bonds with families.
Rush Hours
Re-envisioning the school day to slow the frantic pace and make time for real connection.
Safe in School
Sexual harassment (and worse) is rampant, and there’s still too much silence in our classrooms.
Students as Teachers
Exploring the mutual benefits of peer-to-peer teaching — and strategies to encourage it.
Can We Talk?
What students can learn through intentional conversation (and how to get them to speak up).
Optimism Stronger Than Fear
Immigrant and refugee children are resilient and determined to contribute. Will we stop them — or support them?

Jessica Lander
Jessica Lander, a high school teacher and a 2015 graduate of the Harvard Graduate School of Education, writes about education for Usable Knowledge, the Boston Globe, and other outlets. For two years, she wrote a regular series of blogs for Usable Knowledge about her experiences as a new teacher. With Karen Mapp and Ilene Carver, she is a co-author of Powerful Partnerships: A Teacher’s Guide to Engaging Families for Student Success.  Follow her on Twitter at @jessica_lander.
See More From This Author
See More In
Civics and History Language and Literacy Learning and Teaching
Perspectives + Opinions
Finding What's True
A cross-disciplinary search for truth — and the critical thinking skills students need in order to assess it.
Zachary Herrmann
Civics and History, K-12, Learning and Teaching, STEM Learning